The California Museum of Photography and Culver Center of the Arts boasts a collection of pieces created by many talented artists. On the first Thursday of every month, UCR Arts shines a spotlight on some of these amazing pieces and welcomes students and staff to participate in a detailed analysis of specific artworks. On April 1, UCR Arts hosted a slow art walk centered around photographs with an ocean view.

This First Thursdays event had a surprisingly small audience compared to the ones that I’ve attended in the past. There were roughly five people in the Zoom meeting, but the size of the group did not deter from the experience. The moderator, Cambra Sklarz, was friendly toward all the viewers and opened up the meeting by asking us about our favorite beaches. I don’t have a preference because I’m not an avid beachgoer, but one participant mentioned that their favorite was Laguna Beach.

Throughout the rest of the meeting, Sklarz showed a PowerPoint of different photographs involving the ocean and challenged viewers to consider the elements in the photos. It was interesting to see the different oceanic scenes that photographers chose to capture. The photos were taken from places such as Newfoundland, Hawaii and Oregon, displaying a variety of landscapes. Most of the images were taken in black and white. A few participants commented on how the lack of colors took away from the details of the piece, leaving room for the imagination. Others noted that the images were taken at varying times of day based on the shadows.

Although the images were of the same subject matter, they were all unique and taken from different vantage points, casting different tones. One photo of a crowded beach showed the oceanic view as a loud, community experience. Since this photo was taken from a higher perspective, it further emphasized the vast, collectiveness of the ocean. Another photo depicted a single person standing atop a rock and looking out at the ocean pensively. This photo reflected a feeling of loneliness, and it’s closer angle made the photo feel more personal. The last photo that was shown was of an octopus sitting on the beach. The absurdity of seeing the sea creature lying on the sand ended the meeting on a lighthearted note.

This First Thursdays event was informative and the small group environment was friendly, and people felt comfortable sharing their thoughts and opinions with everyone. I recommend attending one of these programs if you get the chance, especially if you are a fan of the arts. On April 10, UCR Arts is hosting a similar event called “Slow Art Day.” This event will include yoga, three Slow Art tours and sound bath meditation. For more information, check out the UCR Arts website. 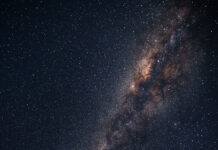