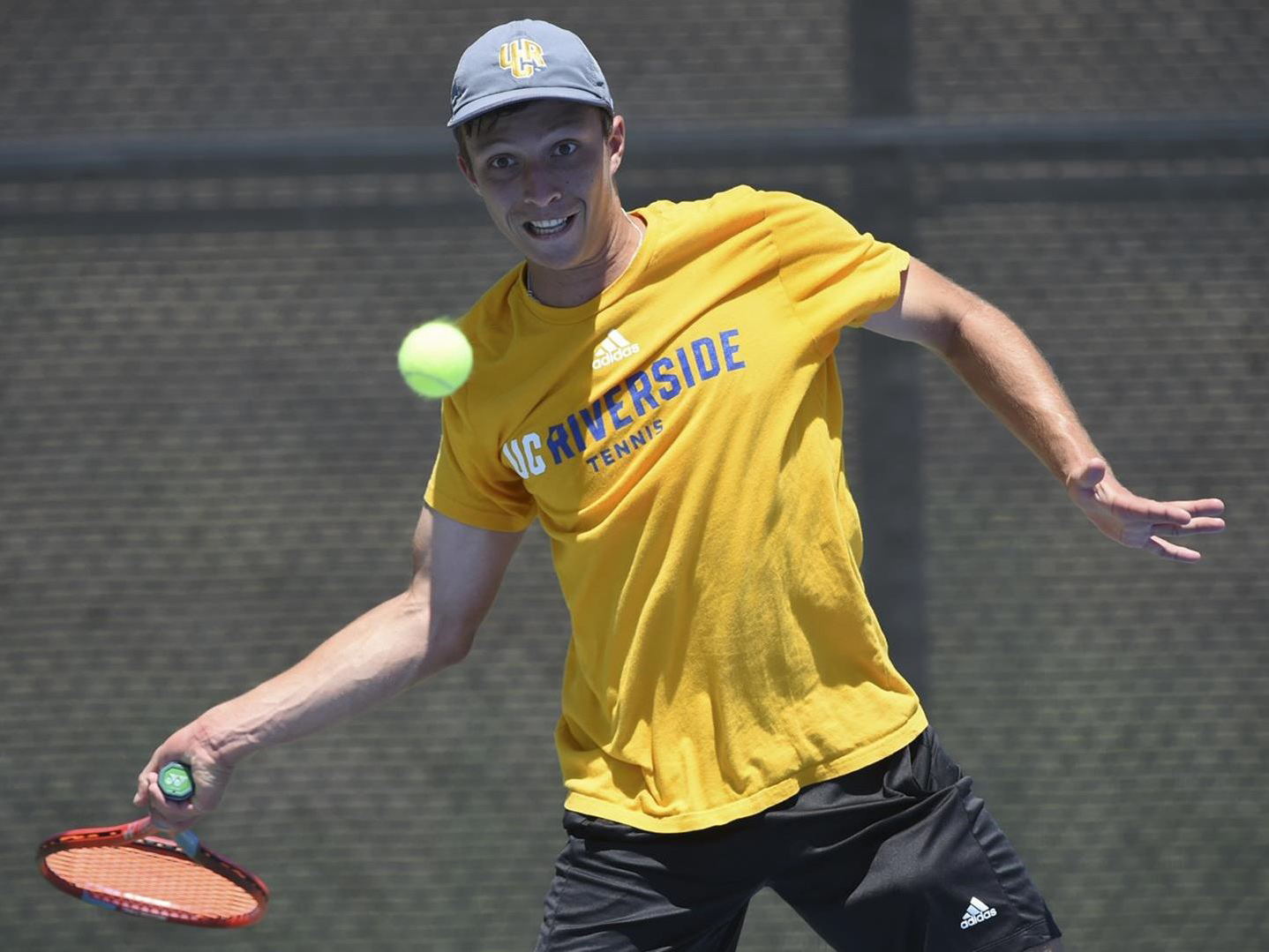 UCR’s men’s tennis team was eliminated in the first round of the Big West Tournament, losing 0-4 against a formidable UC Santa Barbara squad on Friday, April 30 at the Orange County Great Park. The Highlanders played a shorter season with limited practicing opportunities this year due to mandated coronavirus restrictions but are looking to build on gained experience for their young team for next season.

“It was a great moment to be able to come back and practice again,” Head Coach Mattias Johannson said. “A lot of credit should go to UCR Athletic Director Wesley Mallette for this opportunity. But of course, it was also a tough year without any pre-season practice and slow build-up of performance that we normally do. It has been a careful balancing act to make us better but avoid injuries due to a too heavy workload. We got through with no major setbacks injury-wise, and guys got exposure to competition again which is something we will build upon for next season.”

During the regular season, UCR came close to defeating the eventual conference champions, UCSB, 3-4 overall in their first match-up on Friday, April 16. However, the Gauchos kicked it into high-gear on their second meeting with the Highlanders to overcome UCR’s best efforts at the tournament. In the playoffs, UCR redshirt senior Gilbert Chung and junior Nolan McCaig competed together in the first doubles match of the day for UCR but fell short, 4-6. UCR’s sophomore twin brothers, Jayson and Michael Blando, also fell 4-6 in their doubles match. UCR freshmen Antreas Djakouris and Bingru Chen lost their doubles match, 2-4. The Highlanders failed to win their singles sets, but McCaig and freshmen Joshua Roth were just shy of victory in their solo contests. The solo matches of the duo concluded with scores of 5-6 and 5-7, respectively.

Despite an unprecedented season, Coach Johansson is optimistic about his young team. He acknowledges the success of individual veteran players but also believes that the younger guys are on their way too.

“Everyone plays an important part of a team and possesses different valuable attributes, so from that standpoint, everyone contributes equally to a team’s success. If I only look at on-court match performance, Nolan McCaig had a stellar season, and if we look at what a player has accomplished over his career at UCR, Gilbert Chung has had an unmatched career in growth, leadership and performance. I’m sure the rest of the guys will follow suit when everything is said and done,” Johansson said.

“It was huge for our young team to get match experience this year and see for themselves that college tennis is something completely different compared to anything they have done in the past. I look forward to getting everyone back, including the players that could not make the trip from Europe due to COVID-19,” Johannson said.

He continued, “I’m really excited about next year’s group and to especially have the opportunity to have a regular fall practice block, so we can do what we normally do when late winter arrives — win matches and have strong bodies!”

The Highlanders finished with a final record of 2-12 for the year. Next season, all current players on the roster are planned to return.