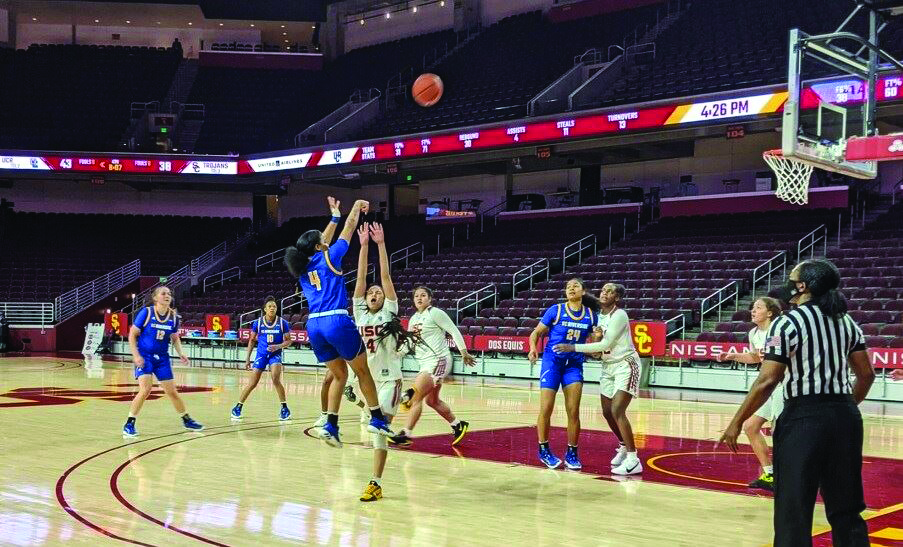 The Highlanders jumped out to an early 15-2 start in the first quarter, which included three early 3-pointers from UCR. However, the Trojans settled themselves and finished the first quarter strong, as they went on an 8-2 run to cut the deficit to seven, leaving the score at 17-10 by the end of the quarter.

In the second quarter, the Trojans continued to chip into the Highlander lead. A layup from freshman forward Alissa Pili brought the Riverside lead down to two points, 19-17. The Highlanders responded by going on a 11-0 run to extend the lead back into double digits. With one second left on the clock, Cooper capped off a spectacular first half with a 3-pointer at the buzzer to put UCR up 36-19 at the end of the first half. Cooper, in the first half, erupted for 18 points, in which she carved up the Trojan defense with a series of layups and jumpshots. The Highlander defense in the first half was also stifling, in which they did not allow a single 3-pointer and held the Trojan offense to only 33% shooting from the field.

In the third quarter, however, the momentum shifted to USC as they began to comeback. The Trojans tightened up their defense, and the Highlanders were unable to get anything going offensively, which let USC go on a momentous 17-0 run to bring them back within two points, 38-36. However, a 3-pointer from Cooper with 1:08 left in the third quarter finally broke the scoring drought for the Highlanders. With the third quarter winding down, a jumper from sophomore center Angel Jackson off of a rebound capped off a pivotal third quarter for USC.

Cooper carried the Highlanders offensively with 26 points, four rebounds and two steals. Kyrkjebo contributed with a solid 12 points and seven rebounds, and freshman guard Jordan Webster recorded a near double-double with 10 points and nine rebounds.