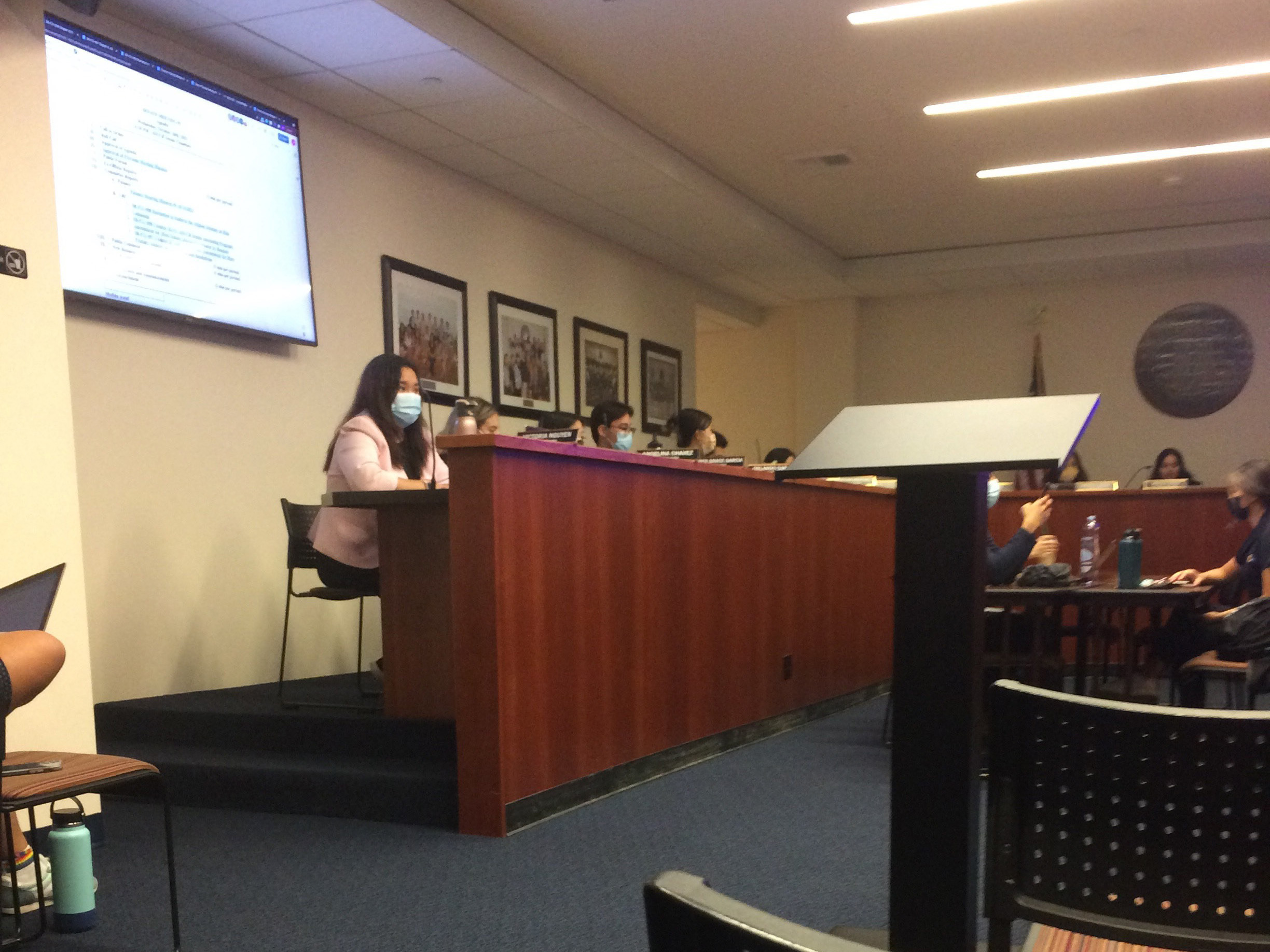 The Associated Students of UCR’s fourth meeting was called to order on Wednesday, Oct. 20, 2021 in the ASUCR Senate Chamber. All senators were present, excluding senators Vu, Aparcio and Kiroloss. The meeting agenda was modified initially to add Finance Hearing Minutes No. 7 to Committee Reports and the Green Campus Action Plan’s Green Grant Allocation to New Business. Motions to open and approve the previous week’s meeting minutes also took place.

A public forum then began with an introduction from Chief Justice of the Judicial Council Mohamad Almouazzen. Almouazzen discussed his and the Judicial Council’s plans for the year ahead, which includes an overhaul and expansion of the Judicial Council’s role as well as a judicial review of ASUCR. Having met with executive and senate leadership, he hoped to instill a principle of separation of power and stated that judicial oversight was far overdue. ASUCR’s constitution, bylaws and leadership will be reviewed as a part of the judicial review process.  Furthermore, Almouazzen announced the appointment of four new judges and his intentions to have all judiciary members paid through a stipend. According to the chief justice, this is only a small portion of the many changes to come.

Following the forum, Jeanine Nassar, Ethnic and Gender Program Liaison, delivered her ex-officio report. Her report began with a discussion of the LGBT Resource Center, which she described as “developed but still in need of work” and appreciated the variety of amenities the center has, such as a lounge and cybercenter. However, Nassar noted that there is a stigma attached to visiting the center in which students believe that they have to be a part of the LGBTQ community to visit, which is simply not true. She also voiced her concern of the lack of gender options of UC applications and websites and aimed to increase the number available. Lastly, Jane touched upon the Middle Eastern Student Center and the concerns of the Muslim community of UCR. Finding Halal options for dining can be a challenge, and restaurants such as Chronic Tacos do not serve any Halal meats. Another issue on campus regards the sale of Sabra Hummus in Scotty’s convenience stores. The brand of hummus was called for removal in 2015, yet stores on campus continue to sell the product whose profits go to the Israeli Military, which is currently involved in carrying out the Palestinian genocide.

Three pieces of legislation were subsequently reviewed following their approval from the Legislative Review Committee. Senate Resolution SR-F21-008 was the first on docket and resolved to endorse the Afghan Scholars at Risk Fundraising Campaign. Primarily authored by CHASS senator Victoria Nguyen, CNAS senator Rachel Paredes and senate intern Realyn Mejia, the resolution tasks ASUCR with endorsing the fundraising campaign, raising awareness of the cause through social media and other forms of communication and supporting the resettlement and support of any Afghan refugees who may be hosted at UCR. The Senate motion to approve the resolution passed with a vote count of 14-0-0.

Next, Senate Bill SB-F21-008 amends Chapter XLVI of the ASUCR bylaws to increase the number of senate interns a Senator can mentor. With a written request to the President Pro-Tempore, a senator can request additional interns with valid reasoning. This amendment removes the original cap of only two interns. The senate approved the bill with a vote count of 14-0-0.

Senate Bill SB-F21-007 called for an amendment to allow for more primary authors on senate bills and resolutions. CHASS senators Victoria Nguyen and Christopher Kent and CNAS senator Rachel Paredes authored the bill and hoped to eliminate isolation between ASUCR and the rest of the campus by allowing more people to work with ASUCR. While there remains a cap for primary authorship at only two elected officials for Senate Bills and three elected officials for Senate Resolutions, the amendment allows there to be no limit on the number of primary authors who are not ASUCR elected officials. CHASS Senator and President Pro-Tempore Orlando Cabalo urged senators to vote for the legislation as it allows for more people to be involved beyond just senators. The senate approved the bill with a vote count of 14-0-0.

New business was then addressed to the senate, and the first to be discussed was GCAP’s Green Grant Allocation. The Green Grant Allocation aimed to provide student networking opportunities, and a project is underway to hold the Sustainability Student Networking Event in the fall quarter. The allocation was approved through a motion with a vote of 14-0-0.

ASUCR President William Wang then took the floor and introduced the three candidates for Judicial Nominations. Fadi Zaki, a third-year computer science major, applied for the judicial position following his involvement in the Finance and GCAP committees. Law and politics have always been an interest of his after he immigrated to the U.S. At the age of 10 Audrey Tang, a third-year sociology major, hopes to become an associate justice, and her career aspiration is to be an attorney. Through her experience interning through leadership positions in a variety of organizations and Phi Alpha Delta, a pre-law fraternity on campus, she has gained skills in leadership, critical thinking and decision-making. Jose Tapia, a third-year political science major, has a history of activism and fighting for justice. Tapia has gained experience in the realm of politics through door-to-door canvassing, organizing rallies, fundraising for refugees and other means of spreading awareness.

Senators then asked the candidates their own questions. CHASS senator and President Pro-Tempore Cabalo inquired about how the nominees will maintain a separation of powers. Tang responded by ensuring that checks and balances will be in place between branches and that much oversight and communication will take place. Zaki hoped to interpret and apply the ASUCR constitution to each case and also supported more open communication to resolve issues. Tapia agreed with his fellow nominees and explained the need for full transparency and an understanding of the constitution. Further questions were also asked regarding maintaining transparency and a separation of powers. A closed session was then held amongst the senators, allowing for the galley to have a recess of 20 minutes. Once the session was over, the nominees were then tabled by the senate until the following week for more questions and review.

The meeting concluded with multiple senator reports from senators Nguyen, Chavez, Syed and Kent. Final announcements included an upcoming R’Garden project, which requires a referendum for funding, as well as Mental Health Awareness Week, which will take place during week five of the fall quarter. The meeting was adjourned at 8:08 p.m.