The UC Riverside men’s basketball team defeated UC San Diego, 59-51, at the SRC Arena on Thursday night. It was the first game for the Highlanders since Dec. 12, as UCR had their next four games canceled due to COVID-19 protocols. The Highlanders were without their star point guard, Zyon Pullin, but a great team effort by UC Riverside was enough for them to get the victory over the Tritons and remain undefeated at home this season.

UCR jumped out to an early 8-0 start in the opening minutes of the game. A tough layup plus the foul by junior forward J.P. Moorman II extended the Highlander lead to 11-3 within the first five minutes of the game. A couple of possessions later, sophomore guard Wil Tattersal finished a layup plus the foul to give UC Riverside a 16-5 lead. However, a five-minute scoring drought from the Highlanders allowed the Tritons to climb back into the game. A 6-0 run from UCSD brought the score to 16-11 before a 3-pointer from redshirt junior guard Flynn Cameron pushed back the lead to 8 points, 19-11. Back-to-back triples from UCSD closed the margin to a one-score game, 19-16 with 6:50 left in the first half.

Both teams continued to trade baskets to close out the first half. The Tritons started to catch fire as they continued to hit three after three. A 3-pointer from freshman forward Francis Nwaokorie brought the Highlander lead down to 1 point, 23-22 with 5:35 left in the half. The Highlanders struggled to hit shots consistently after the hot start, and as the first-half buzzer sounded, they found themselves only up by one, 27-26. At the halftime mark, UCR shot 46.2% from the field but only hit one-eleventh from 3-point range. Even though the Highlanders led the rebounding margin 24-13, they also turned the ball over nine times compared to three from UCSD, which led to more possessions for the Tritons.

In the second half, both teams battled to secure a hold on the game. A layup from Nwaokorie gave UC San Diego their first lead of the game. UC Riverside responded by going on a quick 5-0 run led by an and-one layup from Moorman II to give UCR the lead 33-28. However, the Tritons went on a 7-0 run of their own to retake the lead led by the reigning Player of the Week, Toni Rocak. Nearing the halfway point of the second half, the Highlanders started to gain control of the game as a 9-0 run gave UC Riverside a 47-38 lead. A couple of minutes later, a corner triple from Cameron gave UCR their first double-digit lead since the opening minutes of the game, 54-43, with 6:10 left in the game. However, the Tritons would not go away, as back-to-back triples from redshirt junior forward Matt Gray brought UCSD within five, 54-49.

With 44.6 seconds left in the game, Moorman II iced the game with a spin move into a jump hook to give the Highlanders a 58-51 lead. The Tritons tried to make one last effort to make a comeback into the game, but a costly turnover from redshirt sophomore guard Jace Roquemore put the game away for UCR, as UC Riverside won 59-51.

Cameron led all scorers with 13 points, while graduate student guard Dominick Pickett and redshirt junior center Callum McRae both had a double-double with 12 points and 12 rebounds. UC Riverside dominated the glass with 51 rebounds compared to the 24 from UC San Diego, which proved to be a huge turning point for the Highlanders in this close game.

The Highlanders open up Big West Conference play with a win and improve their record to 7-4 (1-0). They will have a big matchup at home against UC Irvine on Saturday night, Jan. 8, at 5 p.m. 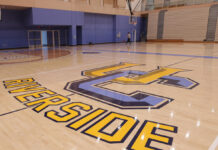 With the spread of the Omicron variant in California, UCR Athletics decides to take a brief hiatus