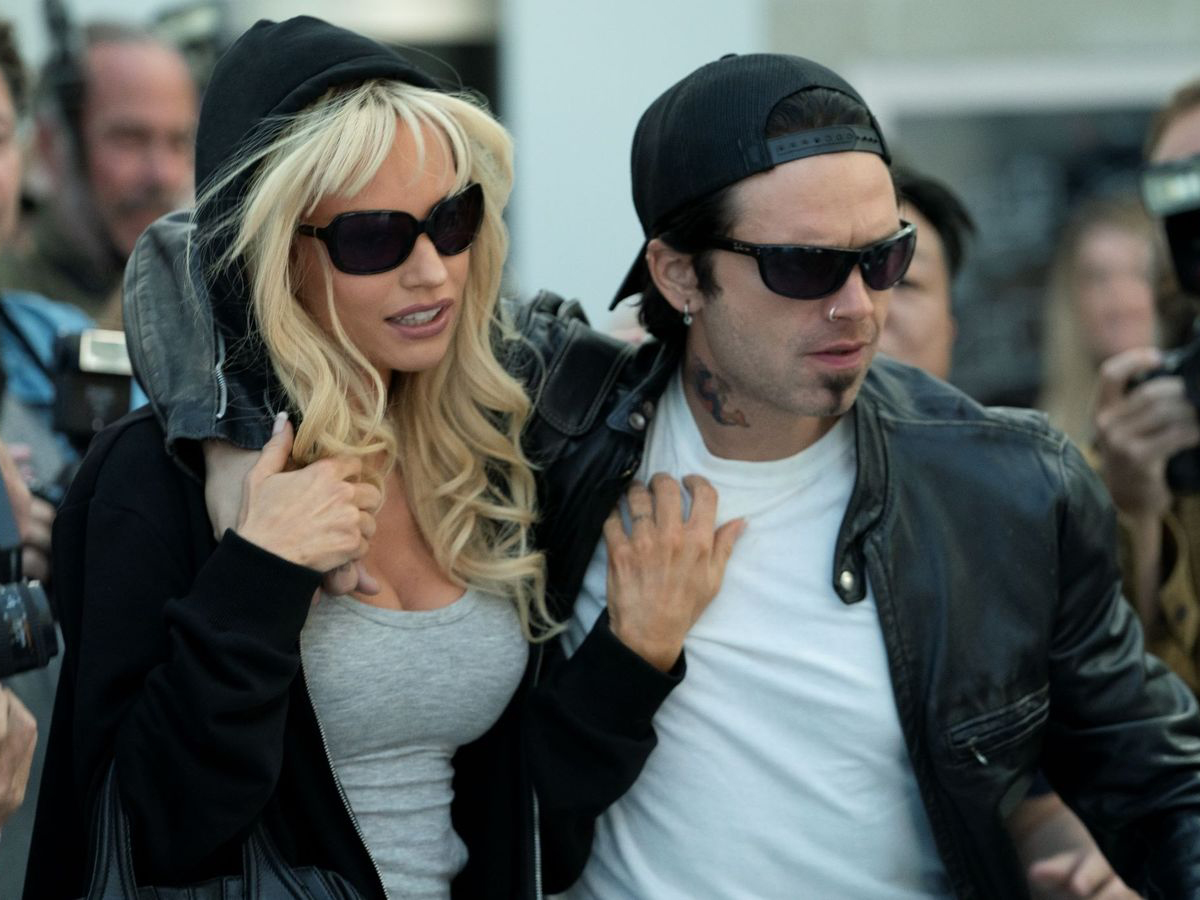 The ‘90s was a time of celebrity scandals that have managed to remain engraved in the minds of growing generations. One particular scandal that has resurfaced is the leaked sex tape of “Baywatch” star, Pamela Anderson, and her then-husband, Tommy Lee. Hulu has recently come out with the limited drama series, “Pam & Tommy,” that has returned a nostalgia of controversy and nightmares.

The show dives into the chaotic birth of Anderson and Lee’s marriage. From a viewer’s perspective, it’s clear that the pair had an endearing love toward each other while also managing to not really even know each other. Their rushed romance led to a quick marriage in Cancun with the stars later departing to Malibu to live their romantic dream. Viewers of the show come to learn that Lee is having his house remodeled by fellow carpenter, Rand Gauthier (Seth Rogen). After Lee humiliates and refuses to pay Gauthier for his so-called “bad” work, Gauthier decides to take karma into his own hands. He steadily plans and ends up stealing an entire safe from Lee that contains valuable belongings, including the sex tape. As an act of revenge and to get his money’s worth, Gauthier publishes and sells the tape alongside partner Uncle Miltie (Nick Offerman) on the newly born world of the internet.

The first two episodes showcase how Anderson and Lee’s privacy is utterly destroyed and violated. The tape is quickly branded and promoted through Anderson’s name, turning her overall image into a sexualized object for the world to watch. Even if her husband is in the tape, Anderson’s name is the one that is being brought up within the media storms. Anderson is fueled by the controversy that ruins her short-lived happiness about her first-ever pregnancy while Gauthier and Miltie indulge in their illegal, profitable earnings.

Surprisingly, the leaked tape isn’t noticed by the media at first. It slowly spreads in the confines of friend groups to office spaces until it lands in the hands of Penthouse founder, Bob Guccione, pushing Lee to file a lawsuit against the magazine mogul. Once this lawsuit occurs, the media begins their journey of using the tape for punchline jokes on popular Tonight shows and coverage in newspapers. The inevitable controversy slowly deteriorates Anderson and Lee’s once-happy marriage.

Lily James, who plays Anderson in the series, undergoes a drastic change to fully embody the ‘90s star. From fake veneers to big blonde wigs, James became Anderson in the flesh. Since the real Pamela Anderson refused to have any part in the production and development of the show, James went out of her way to study every interview of the “Baywatch” star that she could find. In the end, her research paid off. The young English actress captured Anderson’s light voice and charismatic attitude that made her shine throughout her ‘90s reign as a Hollywood star.

James’ co-star, Sebastian Stan, also captured the essence of Tommy Lee. Lee’s notable tattoos transformed Stan, who captured the musician’s notorious behavior that deemed him as a punk rockstar. Though he is known for his role as Bucky Barnes in the Marvel Cinematic Universe, Stan proves that his acting abilities can expand over a broad range of characters. His performance as Tommy Lee will certainly be a memorable one for his career.

Like many shows that are based on real events, there will always be a slight tweak of reality to create more drama. “Pam & Tommy” changes the timeline of a few events to place emphasis on the emotional stress that Anderson suffers as her public image is dragged across the tabloids. The limited series shows how celebrities are often seen as Hollywood objects whose privacies are treated like everyday valuables to be seen by the public. At the end of the day, celebrities are humans too, and they have a right to decide what they’d like to share about their lives. In Anderson and Lee’s case, they were victims of a petty plot that changed their lives and images for the years to come.

What’s great about the show is that it is in no way making fun of the situation the couple experienced. “Pam & Tommy” does an excellent job at depicting the trauma that one leaked video or image can do to a person’s life. It gives the audience the opportunity to understand what the couple may have felt during the most controversial moments of their lives.

Verdict: “Pam & Tommy” is the kind of show that will captivate audiences and cause them to grow sympathetic to its real-life personalities. It brilliantly displays both the relationship between two Hollywood figures and the immediate consequences of having your private life exposed to the dangerous world of the internet.