Home News UCR Dining announces the opening of Bytes and the Market at North... 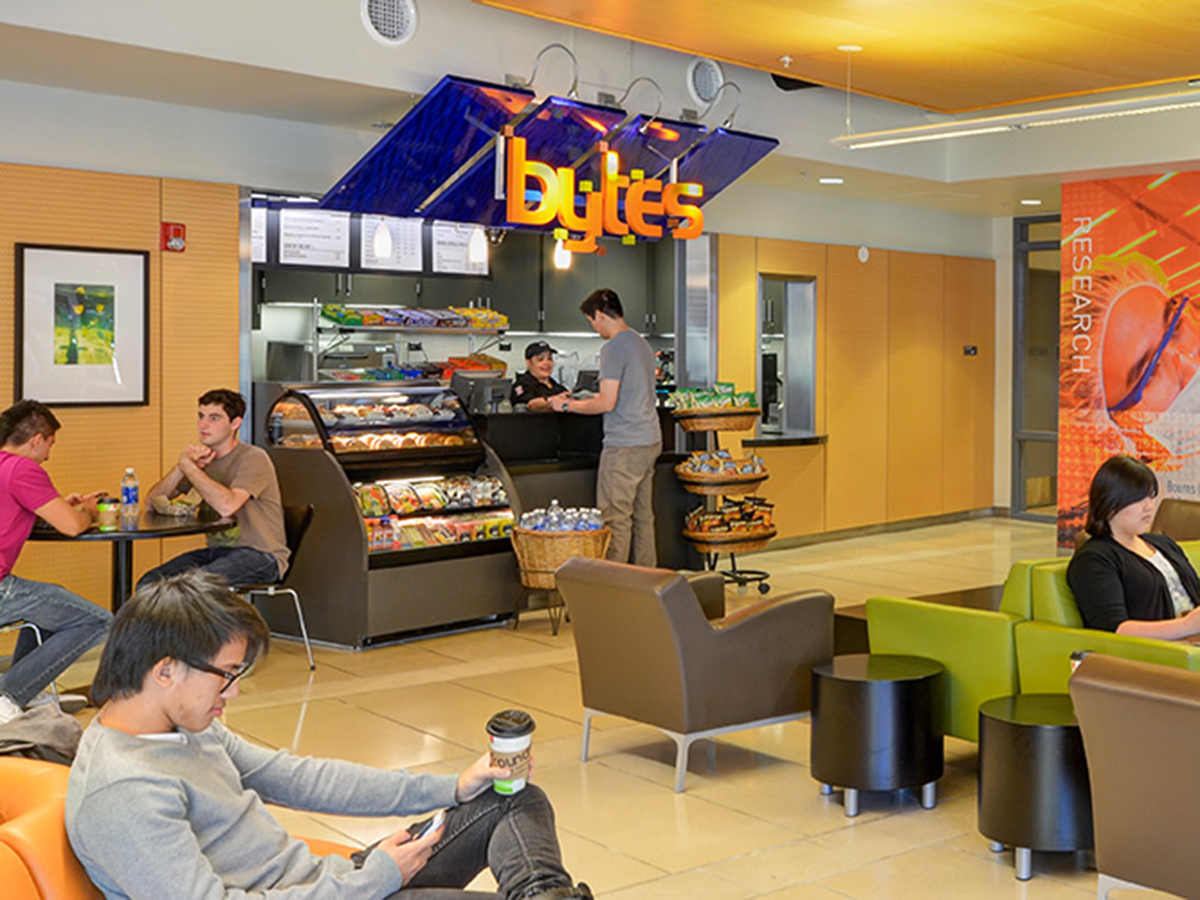 On Monday, April 4, dining locations Bytes in Winston Chung Hall and the newly built Market at North District officially opened for business. On the day of, UCR Dining posted the Market’s opening on Instagram, granting the first 200 of its visitors a free ice cream bar. Bytes opened accordingly with UCR’s 2021-2022 Dining Hours poster, which advertised the initial date of April 4, 2022.

Though the COVID-19 pandemic forced on-campus businesses to close for a couple years, this quickly turned into a chance to revamp UCR’s dining experience. The Market at North Disctrict’s establishment follows that of the Barn and Glasgow Dining Hall. Though operations such as Lothian’s dining hall and Glen Mor’s Scotty’s remain closed, the reopening of Bytes shows hope that the original UCR dining scene is getting back on its feet.

Bytes is a grab-and-go cafe situated in Winston Chung Hall that offers a handful of Starbucks drinks as well as warm lunch and snack items. “You can find all your Starbucks favorites such as your caramel macchiatos, your matcha lattes, your pink drinks and refreshers,” says Bytes manager, Jonathan Rubio Fonseca.

Ideally, students and faculty members passing through the Engineering building would grab a quick “byte” and go on to their next class or such. Students who are in their third year or above will likely remember this iconic pick-me-up spot.

Fonseca saw to it that Bytes not only returns to its former glory, but also undergoes opportunistic revisions. “We just have a bit of a condensed menu of our food items. Slowly but surely we’re going to start re-adding new things,” shared Fonseca. “But what’s exciting about starting with a smaller menu is that we might be able to reinvent our menu. We want to bring Bytes to what it was before, but we also want to reinvigorate and reimagine.”

Fonseca wants a Bytes that fits more of the current trends and is reflective of what its customers likely want to see. One customer mentioned that they miss the peppermint syrup that was available beforehand, to which Fonseca promised he would look into bringing it back by the week after.

The Market at North District is also seeking suggestions on what the student body would like to see sold. Paying a visit, one can see a post-it note collection on the glass of the soon-to-be hot foods bar, where the manager invites all to write what they’d love to see at the new market. There were quite a few requests for Dippin’ Dots, as well as items that ranged from mochi ice cream to Lactaid.

That being said, the Market already has ambitious plans of its own. Megan Tran, a third-year Business Administration major who works at the Market, shared in regards to this: “It’s going to have a bit of Glen Mor in it with its hot foods section, a bit of Starbucks with its smoothie, coffee and pastry station and there will be a soft-serve station. It’s definitely going to have a little bit of what everyone really enjoys.”

Of course most of its customer base is the residents of the North District apartments. “It’s more convenient for them to come down here rather than go to Scotty’s,” says Tran. Campus-wide students, however, are encouraged to venture over and take a look at what they have or are pending to offer.

Through the help of student workers, Bytes and the Market managed to dodge the campus-wide worker shortage that affects bigger dining industries and forced Lothian’s dining to remain closed. However, the challenge they encounter now is getting the word out to students that they are open for business.

“We’ve been closed for so long during the pandemic, so only third or fourth-years knew what Bytes was,” said Fonseca. “For a lot of people coming back, Bytes lost its image.” On the upside, this is the first time in a couple of years that UCR retains a lot of residents, so Fonseca is seeing a lot more visitors due to more classes being in-person.

Tran also believes that very little media work is being done to promote the Market’s presence on campus. “It didn’t have a very big opening reveal compared to how everyone was anticipating it,” she said. “It sort of just opened, and we were doing business as usual.” Tran hopes that more awareness will come out soon.