The UC Riverside men’s baseball team was hosted by Long Beach State to finish up their back-to-back ballgames on the road at Blair field. It was a triple header against the Dirtbags that began on Friday and concluded on Sunday afternoon, just in time to celebrate Mother’s Day. The two teams last met a little less than a year ago on May 9, 2021 when the Highlanders lost the final ballgame of the series by a point. Hoping to break their four-game losing streak, the men’s baseball team return to the Dirtbags’ diamond after a devastating 3-4 loss the night before. 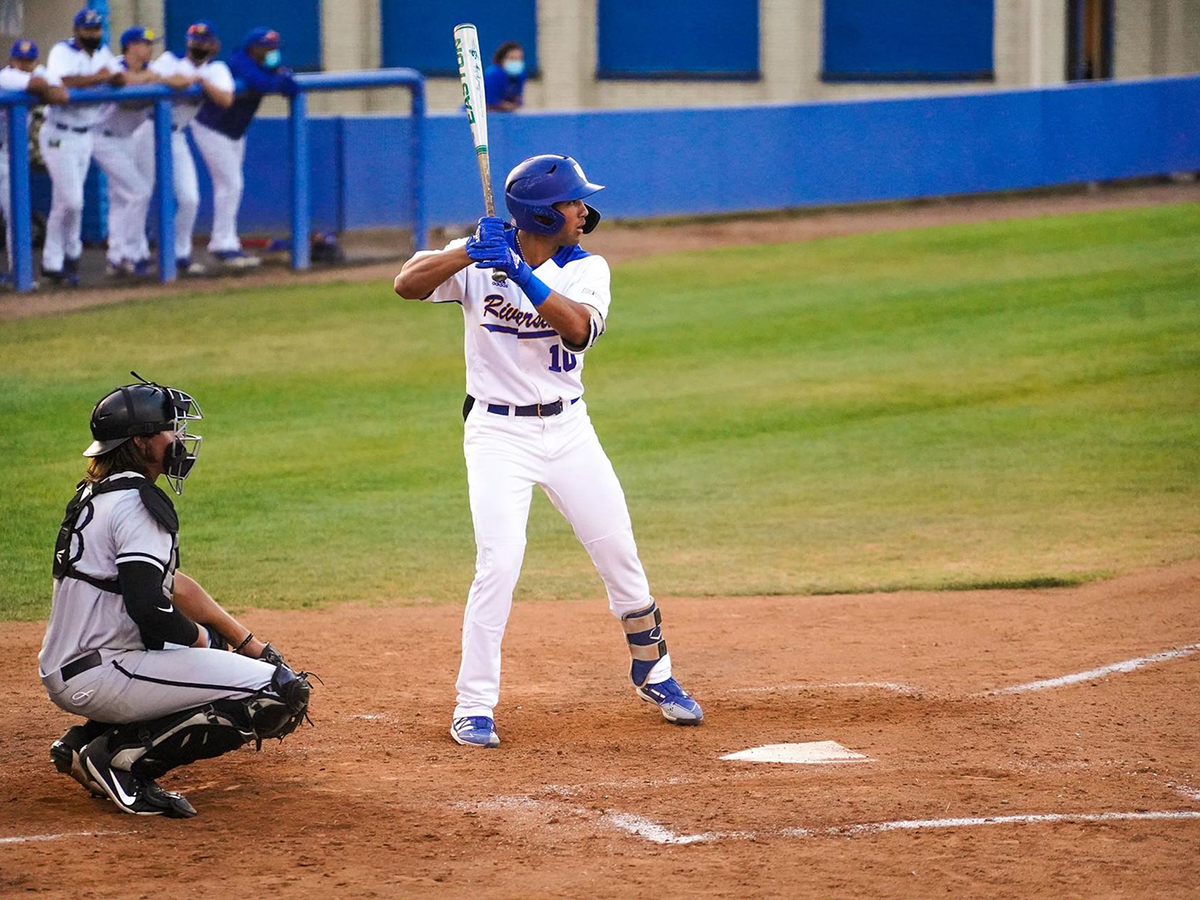 The ballgame began with the Highlanders batting at the top of the inning and the Dirtbags at the bottom. Neither team scored a run as the inning closed, but the home team managed to score a single run during the bottom of the second inning to put the Dirtbags on the scoreboard. During the third inning, senior pitcher Jeremiah Priddy returned to the mound as he faced off against the Dirtbag batters. Unfortunately, Priddy ended up allowing three runs to extend the opponents’ lead to four as the Highlanders struggled to join them on the scoreboard.

Sophomore infielder Anthony Mcfarland stepped up to the diamond at the top of the fifth inning and successfully got the first base hit of the day for the Highlanders. With redshirt junior catcher Danny Carnazzo at bat, Mcfarland advanced to second base on a wild pitch and Carnazzo ended up on first after a walk with only one out for the visiting team. Freshman outfielder Andrew Rivas is now up to bat with the bases loaded after redshirt junior catcher Jacob Shanks moved to first base after another walk. With an opportunity for a grand slam, everyone had their eyes on Rivas as he attempted to send his teammates home. With a hit, Rivas sent the ball flying and Mcfarland scored the first run for the Highlanders as a fielder’s choice occurred, striking out Shanks instead. With runners on the corners, sophomore infielder Anthony Mata is on-deck as the Highlanders endeavor to make the most out of their opportunity to score some runs. Alas, they were struck out as Mata swung and they closed out the inning with a single run.

At the bottom of the fifth, Priddy is once again on the mound. The senior pitcher, at this point of the game, had a 4.15 ERA and gave the opponents their chance at a grand slam. With bases loaded and with one out, Priddy allowed a hit by the other team and gave them two more runs to put the score at 1-6 in favor of the Dirtbags. After another two-run hit by the home team that put the score 1-8, the Highlanders brought in sophomore pitcher Kyle Anderson as a relief in hopes of closing out the inning without letting up any more runs. Unfortunately, the opposing batter gets a 2-RBI single as the Dirtbags extend their lead to 1-10 while Anderson attempts for the strikeout.

The Highlanders went down on a 1-2-3 inning for the top of the sixth, with all three batters unsuccessful at reaching a base. The inning closed out with neither team scoring a run, but the bottom of the seventh showed a stretch in the scoreboard as the Dirtbag batter hit a homerun and the score became 1-11. Rivas, at the top of the eighth inning, hit a single to the center and advanced to first base with Mata on-deck. With two runners on the field, the Highlanders got another chance at scoring with redshirt senior outfielder Dylan Orick batting for the visiting team. However, they were struck out by the Dirtbag pitcher and once again closed out the inning without scoring a run.

The final inning of the game opened with Mcfarland batting for the Highlanders after redshirt senior utility Nathan Webb hit an impressive double to left field. Shanks followed up with the momentum as he got a single hit to right field, sending Webb home and advancing Carnazzo to second base. Rivas returned to bat and not a moment later, hit a single to left field to send Carnazzo home to cut the Dirtbag lead down to 3-11. With Mata batting once more, two runners remain on the field for another chance at trimming the lead with only one out. Orick kept it going as he also hit a single to center, allowing Shanks to score a run. Redshirt freshman Joey Nicolai is struck out to end the ballgame and the Highlanders end the night with a 4-11 loss.

The men’s baseball team will be returning to their home field on May 11, 2022 as they welcome the Washington State Cougars to the Riverside Sports Complex at 6:00 p.m.