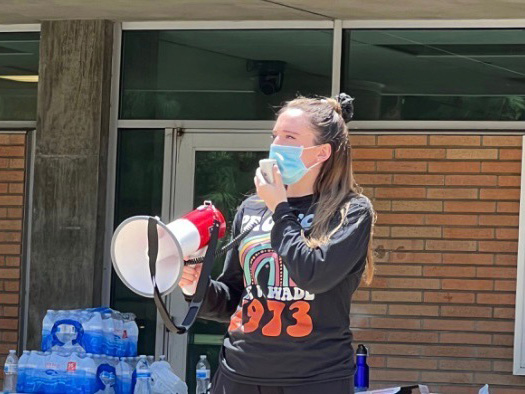 On Thursday, May 19, student union associates and allies stood in front of Skye Hall to protest UCR’s Title IX unresponsiveness with investigating sexual assault cases. The rally was also a space to offer support to assault victims. The event was organized by Ph.D. student and political science T.A. Morrey, with help from UAW 2865 student union, the Graduate Student Association and undergraduate allies. The rally was mainly aimed at Title IX director Kiersten Boyce, who was present at the event.

After Boyce departed, rally-goers marched into Skye Hall in an attempt to confront her at her front door.

In an effort to raise awareness, victims sacrificed their confidentiality as they publicly shared stories including rape, stealthing and persistant transgressions of privacy from strangers. There were also experiences of racially-motivated transgressions that victims felt the office had ignored.

“We’re here to hear about the failings of this Title IX office,” Morrey stated in a speech, “I’m going to get my doctorate from here, and will likely be a professor. And I will continue to do everything in my power to make sure admin doesn’t get away with this on campus anymore.”

Participants chanted, “Kiersten Boyce has got to go,” signaling their belief that the Director had done such a poor job overseeing assault cases that she must be replaced. Boyce stood opposite the rally and listened to concerns, along with compliance investigator Preet Nekand and HUB Director Brendan O’Brien.

One speaker, Cat, unapologetically shared an incident she had at the age of 17 to the administration, deemphasizing “trigger warnings” and considerations towards Boyce. “I want you to feel uncomfortable,” she said.

Another victim, Christine, spoke about a stealthing incident she experienced— defined as when a man discreetly removes the condom during penetrative sex, without the partner’s consent or knowledge. California just became the first state to make this act illegal in October 2021.

Navigating an act that just crossed the gray area of legality, they stated it was difficult receiving validation from the office, and so decided to come forward to police stations instead. According to her, the police cared more about this case than UCR’s Title IX office, as they made more substantial efforts in investigation.

Victims were constantly met with the dead-ends of “We don’t handle that here,” or “If it’s not in the policy then it’s not violence.” When that same case is considered seriously by police departments, however, that delegitimizes the office’s discretion in identifying worthy cases.

Inaction is especially dangerous as retaliation from perpetrators often occurs once they learn their victim is trying to speak out against them. One victim shared that their perpetrator began spreading rumors about them and attempted to twist the narrative, saying that she was the assaulter and he was the victim.

“If a woman brings up a problem, we are somehow unstable,” shared the speaker. It was also pointed out that retaliation crosses the bylaws set by Title IX, adding another point of reason for the office to respond.

Other than direct retaliation, victims shared experiences of constantly looking over their shoulder, worried that they’ll run into their perpetrator on campus. As their perpetrator roams free and protected by the university, it comes at a cost to the victim’s safety in higher education and will forever affect their experience at UCR.

One speaker, Kay, made sure that male victims were seen and felt validated. They state that even if women are more likely to be victims, this still happens to men and their participation in these organizations is important.

That being said, certain demographics see their cases more likely to be turned away — black women and LGBTQ members. “I’ve had four students disclose to me that they were going through the Title IX process. Three of them were black women,” shared Morrey, “There’s also an issue with queer women’s experiences. Bisexual women are the demographic most affected by sexual violence.” While acknowledging that white women still face obstacles to their justice, Morrey states that they are more likely to receive respect than women of color.

Ralliers also accused the office of turning away cases of vandalism involving swastikas and the n-word, as it is also the designated overseer of racial harassment cases. Morrey pointed out the hypocrisy in policy that you can write the n-word on a white board as a non-black student, but can’t use chalk on campus grounds.

Protestors do not believe Boyce and faculty members attended to listen or empathize. “The Director of the HUB came to me and said that he was here to make sure that if we go inside the building, nothing dangerous happens and ‘to keep the peace’,” said Morrey. Some were visibly typing on their phones as victims shared accounts, to which one speaker told them, “Please do not text as we are speaking. That is incredibly rude.”

Morrey wants UCR students to know that the union is forming a sexual assault support group of their own, and anyone interested in reaching out can email her at mlied002@ucr.edu.