Highlander
Home Radar Movie Reviews ‘Triangle of Sadness’: a powerful, poignant analysis of the lives of the... 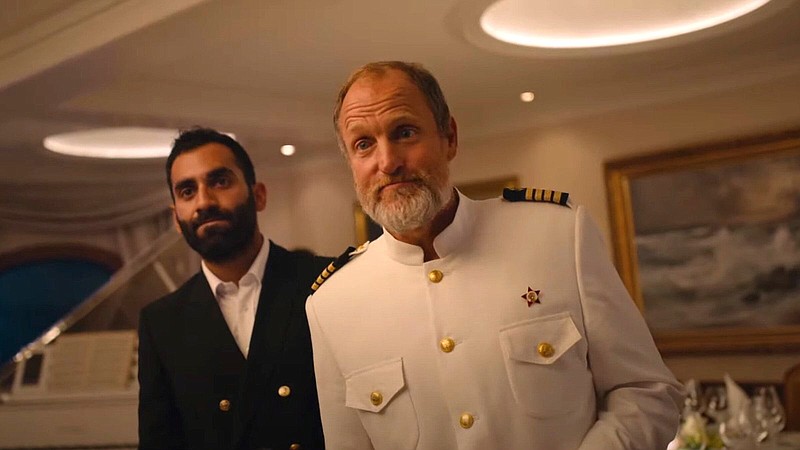 The film’s ambitious mix of dark satirical comedy and social commentary culminates in a wondrous piece of art spearheaded by great performances.

Swedish director Ruben Östlund’s first foray into English language film, “Triangle of Sadness,” widely released on Oct. 7, 2022, took the Cannes Film Festival by storm, earning an eight-minute standing ovation and winning the illustrious Palme d’Or. A highly respected auteur, this is Östlund’s second Palme d’Or winning work, with the first being “The Square” (2017). Filled to the brim with biting analysis on class structure, its masterful direction and powerful acting lead it to serve as a worthy successor to Julia Ducournau’s “Titane” (2021), resulting in a rich visceral experience where the amount of idiosyncrasy is synonymous with its quality.

The film mainly follows two fashion influencers Carl (Harris Dickinson) and Yaya (Charlbi Dean) as they navigate their relationship all while embarking on a luxury cruise, one with unforeseeable circumstances. Told in three distinct chapters, each with more fervor than the last, the entropic nature of a capitalist society is laid out with precision. As soon as the first chapter begins, the viewer is subjected to the rather shallow size of the model and influencer industry that plagues our world today. “Happy” brands like H&M are greeted with smiles, while serious ones like Balenciaga are met with stoic faces. The comedy in this act is far from bombastic and relies on its wit to gain the audience’s favor, a choice that will not leave anyone disappointed.

Carl and Yaya themselves are the embodiment of what exactly is wrong with influencer culture on the surface; their relationship is only built upon the desire to boost their follower counts. The small insights given to us through the couple’s conversations highlight their inability to gauge the world around them, subtly foreshadowing what has yet to come. The second chapter introduces us to the crew and guests of the cruise, each who seem more unhinged than the last. While the guests greedily indulge in pleasures such as wine and dancing, the strain on the crew grows increasingly. Pacing is the area where the second chapter begins to revel in its glory, ultimately providing a brilliant transition of the incessant cracking of the upper class’ shell, the remnants succumbing to chaos.

In particular, Östlund’s writing shines within the character’s varying interactions with one another. The juxtaposing political ideologies of Captain Smith (Woody Harrelson), an American communist and Dimitry (Zlatko Burić), a Russian capitalist, capture the wondrous energy the film exudes. Constant quips combined with the prominence of the production design serve as a perfect balance between the comedic and dramatic nature of the film, always ensuring that there is tonal consistency. Never straying into the waters of pretension; the fluid style of its direction complements the narratives’ descent into madness.

If one were to explain each of the chapters separately, it would not be unintelligent to suggest that they are composed of parts, each from completely separate films. However, the uniqueness of the film’s structure utilizes its unconventional style to keep the audience engaged. Visually rich as it is thematically, cinematographer Fredrik Wenzel’s work especially stands out in the outdoor scenes. Dickinson, Dean and Dolly de Leon are the certain stars of the film overall, and the nuance they bring to the table certainly does not go unnoticed. The mannerisms on display add up to bountiful rewards in the future, pleasing anyone who has an eye for detail.

In a climate where overly political media is heavily frowned upon, there is no doubt that being subtle is of the utmost importance to a film’s messaging. Gut-wrenchingly impactful on the scale of relevancy, Östlund takes advantage of the ever-growing narcissism present within human nature, crafting a tale of pure intricacy. Down to the core, the resounding bleakness that Östlund believes is present in a capitalistic society cannot be denied, no matter where one stands in the political spectrum. Extending far beyond the confines of the cinema industry, the film’s message is clear — basic empathy will be forsaken for the sake of greed if we further descend into our sense of self-indulgence.

The world presented is one where the morality of human nature and its capacity for basic goodness must prevail over materialism, a concept that has rung true since the first spark of civilization. Cryptic to its final frame, questions are left unanswered to encourage the viewer to contemplate what is truly important in today’s world, a reflection that we all must undergo at some point.

Verdict: “Triangle of Sadness” takes a dominant, biting satirical stance on the foolish vanity present within the lives of the elite, never missing a beat despite its seemingly over-aspirational overarching themes.