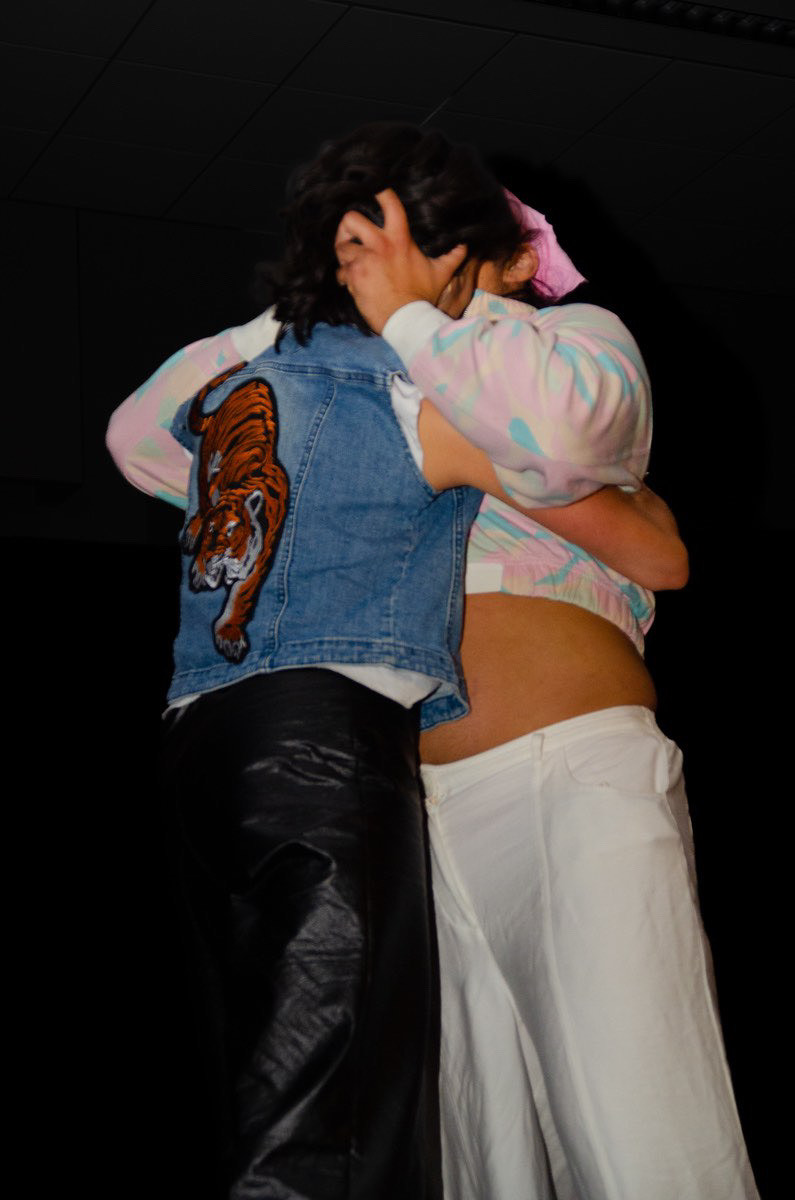 UCR Drag Club hosted its second annual drag show with artistic performers and a beaming audience to prepare for the Halloween spirit.

The Haunted Drag Show enlivened the HUB on Oct. 28, filled with expressive and risqué performances by UCR students. Hosts Olga Marie Davis, UCR Drag Club’s president, and Maksil Lorenzo, recent UCR alumni, made sure to keep the attention of every audience member through their eccentric dynamic.

The show opened with Olga Marie for Drag Storyhour. Wearing a bandana covering their face and a black leather outfit, they moved against the words of Fox News audio recordings that criticized drag performers. “I wanted to include themes that showcase the flaws of how people view us in my performance. I wrote the word ‘predator’ on my forehead and became what people think of us. They view drag performers as sexual deviants, but these same people often fetishize and objectify us for their sexual gratification,” Olga Marie said. Their performance made a statement to fight against the assumptions that society makes about drag culture and its community.

Killian took the stage right after with a fabulous red dress and glimmering golden gloves. As RuPaul’s “Smile” played throughout the room, Killian’s robotic moves and glowing mouth embodied a meaningful performance. Many students cheered and clapped while others swung their dollar bills in the air. They later appeared on stage at the very end of the evening to perform “Death Becomes Me” to Lana Del Rey’s song “Born To Die,” wearing a long, black dress and veil.

Alice Ace haunted the stage soon after with green face make-up, zesty orange pants and a fierce red blazer. They scampered across the runway and into the audience with a striking act and were even given flowers from the audience. Interpreting Jareth the Goblin King from “Labyrinth,” Hunter stomped onto the stage with stellar black boots and a spiky blonde wig like David Bowie’s. Hunter should not only be applauded for their powerful performance but as well as their costume design as they helped with most of the wardrobe utilized by the performers. Following them, Nirvana Mind bloomed with an intricate performance after minor technical difficulties stalled their act. They made light of the situation but soon grew into character once their music began. Wrapped in a blanket and wearing white contacts, they quickly transformed into a glittery black dress and ended their performance with the iconic Death Drop. Though, the icons didn’t stop there. Wh*rechata stepped onto the runway as they impersonated the Fairy Godmother from “Shrek.” As they waved a wand in the air glamorously to “Holding Out for a Hero,” they were able to bring to life a legend from animation.

A brief intermission with a costume contest ensued, allowing the hosts to interact with audience members as they showcased their best Halloween costumes. Soon, the lights went out and Ally Meda illuminated the stage with elegance as they performed Taylor Swift’s, “Look What You Made Me Do.” Nick Herzog, known as Iconik, impersonated Guy Fieri from hair to clothing. Their light-up shoes and slick dance moves made the audience roar into laughter. Kore, the night’s final performer, dressed in a sparkly green bra and skirt with fairy wings, was able to reanimate audience members with their sultry moves.

Lopez described their first experience with joining UCR Drag Club and performing for the first time, saying, “I was a little intimidated at first, but I learned to let loose. Having a community around me made it less stressful. Olga Marie and Hunter really helped me with knowing what resources to use, such as using transtape that helps with breathing, and just giving great advice.” Lopez also mentioned that UCR Drag Club has given them the chance to focus on themself while also giving them their own autonomy. “You have to be who you wanna be and build happy relationships. I have a support system that is helpful and loving in this community,” said Lopez.

When performing onstage, their style embodies both feminine and masculine identities. “I can be anything that I want to be, and I try to be flexible when expressing myself artistically,” Lopez said. Performing at the end with Wh*rechata, Danny and Alice Ace for an exciting “The Rocky Horror Picture Show” inspired act, all created a sensual environment with thrilling dance moves.

Yet possibly one of the most exhilarating performances by Olga Marie and Maksil consisted of a daring duet with “Barbie Girl” playing in the background. Seeing the duo dance around the runway and into the overjoyed audience created a sense of community for artistic expression.

When describing their first experience with drag, Olga Marie remembers an enlightening experience in the Aberdeen-Inverness dorms. They said, “I was practicing my makeup the night before my first show. One of my hallmates (Maksil) was intrigued and everyone in our hall joined together to be put in drag that night. Maksil and I got onstage together for the show and we titled ourselves as ‘Joe Mama.’ I was under the pretense that I’d be going onstage alone that night, but having them by my side made me more comfortable.” Both Olga Marie and Maksil aided each other in the process of showcasing themselves in drag, as Olga Marie helped them with walking out onstage for the very first time.

UCR Drag Club has opened its doors for everyone to join. Olga Marie said, “At AI for the underground drag show, I realized that there wasn’t a drag club on campus. I was involved in the process of building the club with other board members, and we grew from there. The existence of this club allows more students to experience drag in college. It encourages anyone to participate.” The club and its members have enabled many to represent both Drag artists, Queens and Kings, with the latter not being as represented in media. Olga Marie wishes to represent more Drag Kings on campus, as they themselves identify as a Drag King. “There is less opportunity for our demographic, and the club offers us a space to explore ourselves.”

Though creating and planning a drag show from scratch is very stressful, both Lopez and Olga Marie agreed that it was an exhilarating feeling during and after the show. It was enthralling to be in an environment where audiences and performers collided in an artful craft that should be praised. Olga Marie thanked all of the volunteers for making the event as supportive and inclusive as possible, and the LGBT Resource Center for funding the show.

UCR Drag Club opens its doors to all on Thursday evenings from 4-5 P.M. at the LGBT Resource Center. As their second annual Drag Show, it is exciting to see what the club will do next!