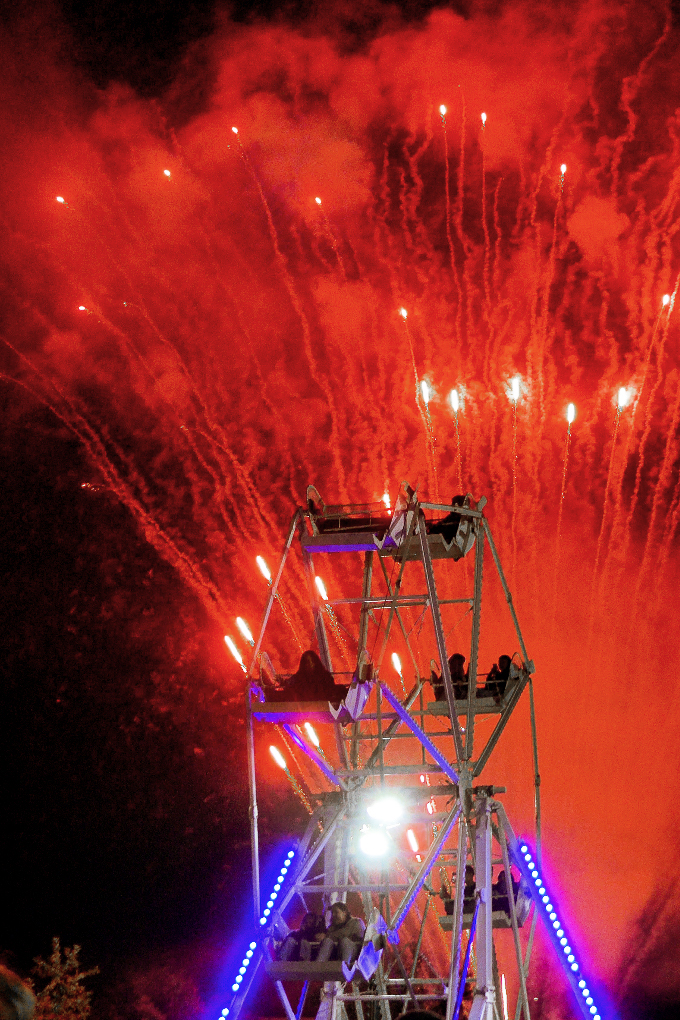 In celebration of Homecoming at UCR, ASPB hosted its second annual concert. Originally branded as Homecoming Bonfire, the night was transformed with hypnotic beats and fluorescent lights that welcomed UCR students to Homecoming Odyssey 2022.

Unlike previous events where lines were scattered across campus grounds, Odyssey was efficiently organized from the entrance to the lines at every booth and attraction. There was also a line for community members as people around the neighborhood were invited as well. Jordan Nevin, a 2020 graduate from UCSC, expressed their excitement when they saw that the Riverside community was invited to Odyssey. “I was able to enter a separate community line and get a wristband which was really nice! ASPB members were very helpful as well. I will definitely be coming to more events like this,” said Nevin.

Guests were then directed to the merch tents where various promo items were given. Hoodies with a simple yet eye-catching design were passed around while bracelets, blankets and enamel pins also served as pieces of memorabilia.

The lines for food vendors began to form, but Baba’s Chicken stole the show as many students enjoyed their free chicken sandwiches. While conversing at the various tables to eat their meals, student DJ, Digital Twin, began their set. Garett Geesink, a fifth-year majoring in computer science, along with his brother Aaron Geesink, make up Digital Twin. As Aaron stood offstage playing the live visuals for the show, Garett performed onstage with their VR headset. “One of my friends thought it would be funny if I wore the headset during my set. I’m actually using the built-in cameras so I can see the audience and my mixer in VR. It did make performing a bit difficult, but I thought it looked pretty cool, so I went with it,” said Geesink when asked about their headset.

Geesink described their experience at Odyssey as an amazing one where they got the chance to connect with the backstage visuals team. Both Geesink and their brother created their own visuals that swirled on the screen as they performed, creating an animated experience of music and colors. As for other UCR students who wish to perform at similar events, Geesink said, “If you want to be a DJ, then just play the music you believe in. I’ve been going to UCR’s DJ club for a year now and they’ve given me so much support to help me as an artist. I never would have gotten where I am without the support from my brother and friends, so I’m really grateful to all of them.”

Soon after, the cries of various students who were anticipating the arrival of Weston Estate were heard as the young boy band scampered onto the stage. Based in North Carolina and self-branded as “ya aunty’s favorite boy band” from an interview with Monsoon, the young group was quick to engage with the audience. They were playful in their mannerisms and displayed contagious dancing as they began their set with their song, “Sixty.” With the crowd cheering and jumping along to their beats, the group flourished with energy and smiles as they spoke to the audience. Tanmay Joshi even took the chance to take a fan’s BeReal as they prepared for their next song. The energy between Joshi, Panchavati and Luka as they sang songs like “Daisies,” “Saturday Nights” and “Cotton Candy” made audience members sing along and wave their arms.

As the young group greeted and signed hoodies and even shoes for fans at the side gate, a video by UCR Athletics played onscreen as it congratulated the men’s soccer team’s win. UCR Collective Faction went onstage and delivered a fast-paced and sharp dance routine before Scotty grabbed the spotlight. Scotty and ASPB members threw light sticks and plastic basketballs into the crowd, and we were quickly mesmerized by the firework show that blew into the night sky while bagpipes played in the background.

As Headliner, ARMNHMR made everyone in the crowd dance and jump to their heavy beats of remixes. It was a sensory overload of joy as people climbed on each other’s shoulders to watch the duo perform. Popular songs such as “Do It To It” and “Satisfaction” vibrated against the stage and flew in techno beats that the crowd moved along with. Joseph Chung continuously spoke to the audience, reminding us to stay in school with awkward jokes or to wave and jump to their sounds. The duo even had Scotty showing off their best dance moves in the crowd. They ended their set with an electrifying remix of “Dynamite,” causing students to sing along to the popular song before the duo said goodbye.

When asked about their thoughts on the rebranding of Homecoming during the event, Mustafa Hassan, an ASPB Concerts Division Intern, said, “I definitely think it embodies our student-athletes and it brings the entire student body together.”

Alex Ha, a second-year majoring in computer science said, “The event was great! ASPB did an amazing job choosing artists that cater to the school’s environment.” Tomin Kappiarumalayil, a third-year computer engineering student said, “My favorite part was the organization of the venue and how they accommodated everyone and handled the long lines. I also appreciate how the event took place on concrete instead of grass because you don’t risk slipping with the pushy, energetic crowd.”

The rebranding of Homecoming allows a new set of traditions to flourish on our Riverside campus, yet many were confused about the meaning of ‘Odyssey’ and why it was rebranded in the first place. ASPB briefly described on their Instagram that the rebranding would “emphasize the journey to becoming a Highlander.” Though the meaning was a bit foggy for students, it was a thrilling experience that brought everyone together for one night.

Verdict: With sleeker organization and artists that enlightened Homecoming with celebration, Homecoming Odyssey 2022 served its purpose to bring the Highlander community and spirit together.