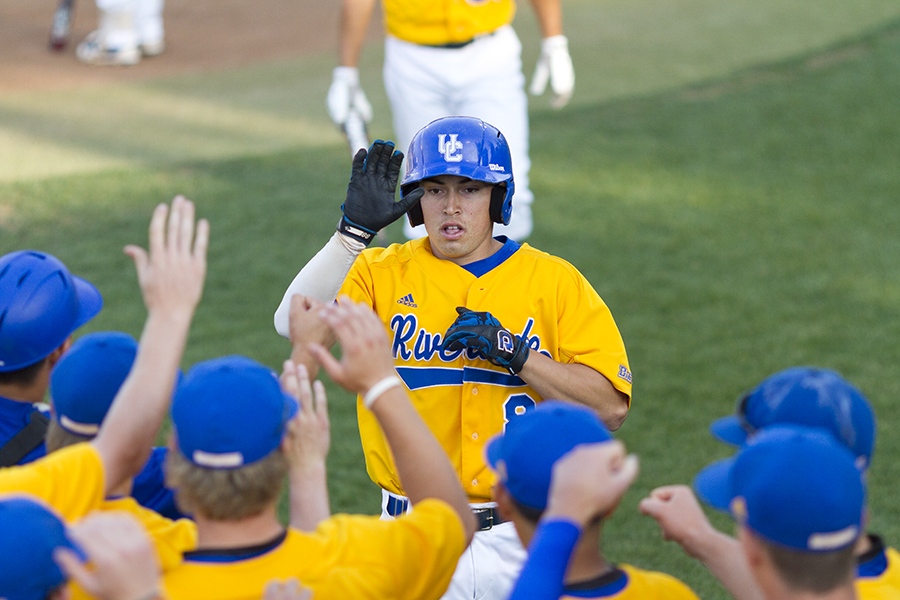 The UC Riverside baseball team was defeated 10-3 at Loyola Marymount University. Donovan Gonzalez was the starting pitcher for the Highlanders. Gonzalez allowed four batters to walk and a double in the first inning, helping Loyola Marymount gain a 2-0 advantage.

In the second inning, Gonzalez got the first two batters out, but struggled the rest of the inning as he gave up a single, a triple and then a walk. Moments later Highlander Kevin Sprague came in to replace Gonzalez on the mound.

UCR cut the deficit to 5-1 in the third inning when David Andriese drove in Joe Chavez with a RBI single to center field. The Highlanders were able to score two more runs at the top of the ninth inning but it wasn’t enough to pull a comeback.

The baseball team bounced back with a 6-5 victory at home against the University of Pacific. With this win, the Highlanders extended their home winning streak to nine games.

Through four innings the Highlanders were scoreless, but only gave up four runs through six innings. UCR was down 3-1 before Pacific responded in the fifth inning with a run to increase the lead 4-1.

UCR scored one run in the seventh inning when Chavez singled to third base to drive in Francisco Tellez to cut Pacific’s lead 4-2. Holinsworth’s single in the eighth helped Bolasky score and then a Pacific error allowed Andriese to dart home to score for a two-run inning.

The game was tied at four runs apiece after eight innings.  In the ninth inning Pacific’s Jason Taasaas scored on an unearned run to regain the lead at 5-4. The Highlanders tied the game on a Andriese single to second base, driving home Tellez. Then Holinsworth’s single drove home Chavez for the game-winning run.

In game two of the series against Pacific, the Highlanders extended their home winning streak to 10 games with an 11-6 win. Joe Chavez hit a home run in the bottom of the first inning to start the Highlanders off, 1-0. The next inning, Francisco Tellez got himself a home run giving UCR a 2-0 lead in the second inning.

Pacific scored in the third on a Dustin Torchio single to center field bringing home Jacob Goulder. Highlander Chavez smacked a double to drive home Devyn Bolasky. Doubles by David Andreiese and Kyle Boudreau then made it a 5-1 lead for the Highlanders at the end of the third inning.

The Highlanders were on fire, scoring three more runs in the fourth inning for a 9-2 lead and they never looked back. UCR added two more runs with Clayton Prestridge’s double driving home Chavez in the sixth inning. The final run for UCR came in the bottom of the eighth as Highlander Chavez drilled a double to bring home Bolasky. UCR won by five, 11-6.

In the final game of the three-game home series with Pacific, the UC Riverside men’s baseball team won at home, 6-4 to complete the sweep. The Highlanders now have an 11-game home winning streak.

Pitcher Mark Garcia pitched five innings, gave up four hits with three runs and two strikeouts. After being down one run, Phil Holinsworth lined to center field, bringing in Devyn Bolansky to score.

The game was tied 1-1 after the first inning. Pacific scored two runs in the sixth inning to give them a 3-2 advantage. In the bottom of the sixth inning, Alex Rubanowitz’s fly out to left field allowed Kevin Davidson to tag home from third base to tie the game at 3-3.

Clayton Prestridge’s sacrifice fly in the seventh drove home Joe Chavez for a one-run lead of 4-3. Trevor Frank replaced Kevin Sprague to close the game for the Highlanders. Riverside was able to score two more runs in the eighth inning for a 6-3 advantage.

Pacific tried to rally for a comeback, but only mustered up one run. The Highlanders are now 17-14 overall and 6-3 in the Big West.