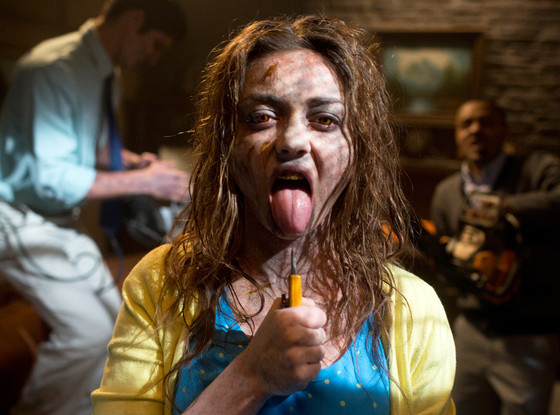 In the last decade, the Scary Movie series grossed over a billion dollars, revitalizing the genre of film parodies. “Scary Movie V,” the latest entry, is the most inept and unintelligible thus far. The foundation of “Scary Movie V” is the sleeper hit, “Mama,” released earlier this year and  “Evil Dead,” which was released last week––talk about a rough cut.

This film breaks the continuity of earlier installments with the departure of the last remaining original cast members, Anna Faris and Regina Hall. Their absence makes this forgettable entry into the franchise that much more unbearable. Ashley Tisdale of Disney Channel fame replaces Faris in the lead female role. Tisdale has no comedic presence and is uninvolved and boorish as Jody, a young woman convinced that there are supernatural entities in her home. Faris and Hall aren’t the only things missing in this dismal effort from series newcomer director Malcolm D. Lee, who seems creatively absent throughout.

The film mistakes spoofing current films with real relevance and immediacy. What made the first two films such a cultural phenomenon was the Wayans brothers (who wrote, directed and starred in the pictures) and their innate ability to comment and critique trends in popular zeitgeist.

Charlie Sheen and Lindsay Lohan star as themselves in an uninspired sendup of the Paranormal Activity series. Not only is this opening sequence (which infers a sexual relationship between the two troubled celebrities) devoid of laughs, but it gives the rest of the film’s short run time (thank God) a feeling that what we’re seeing is as stale and as timely as a 2-year-old episode of the Wendy Williams show.

The film’s use of now-iconic imagery from the Paranormal Activity series lacks insight and is a chore for anyone that is familiar with the found footage series. As the film continues, it becomes obvious that the narrative is virtually non-existent because it only serves to loosely tie “Saturday Night Live”-esque sketches together. Note: “Saturday Night Live” is much better.

In one of the film’s few illuminating moments, the always charismatic Snoop Dogg finds Sheen’s “Mama”-inspired children in a cabin located (of course) in Humboldt County. However, his presence further serves to indict the filmmakers’ inability to say anything new. What makes “Scary Movie V” so infuriating is its stern resistance to saying anything fresh about the horror genre or popular culture. We all know Snoop Dogg loves his chronic medication, we are aware of both Sheen and Lohan’s past legal troubles and we have noted the unintentional comedic elements of Paranormal Activity and its many sequels. All these jokes have been made and are better executed in the form of memes in our Instagram timelines. Too many years have passed for pictures like “Black Swan,” “Inception” and “Planet of the Apes” to be included in a current parody film, and with the exception of superstar R&B artist Usher, all the rest of the film’s “celebrity” cameos will leave audience members under 25 scratching their heads.

So why continue to tread water? This flaccid attempt at rebooting the Scary Movie franchise (the last film was released seven years ago) may ironically be the last in the series. David Zucker (“Airplane,” “The Naked Gun”), who directed the last two films and wrote Scary Movie V, is seemingly responsible for the series’ increasingly goofy and surface-level sensibilities. At 65, is Zucker too old to be relevant? It is certainly a possibility when one looks at the relative age of the Wayans when they were involved in the franchise.

The film’s PG-13 rating also stifles comedic opportunities by never raising its bar above adolescent male humor. There were many moments that included both Sheen and Snoop Dogg which lacked the crude, drug-induced presence that rendered both men iconic pop culture figures. Most of the charm of prior installments came from the unadulterated depictions of sex, drugs and racial tension resulting in moments of hilarity. Comedy is about risk-taking and honesty. “Scary Movie V” is guilty of denying its audience both.