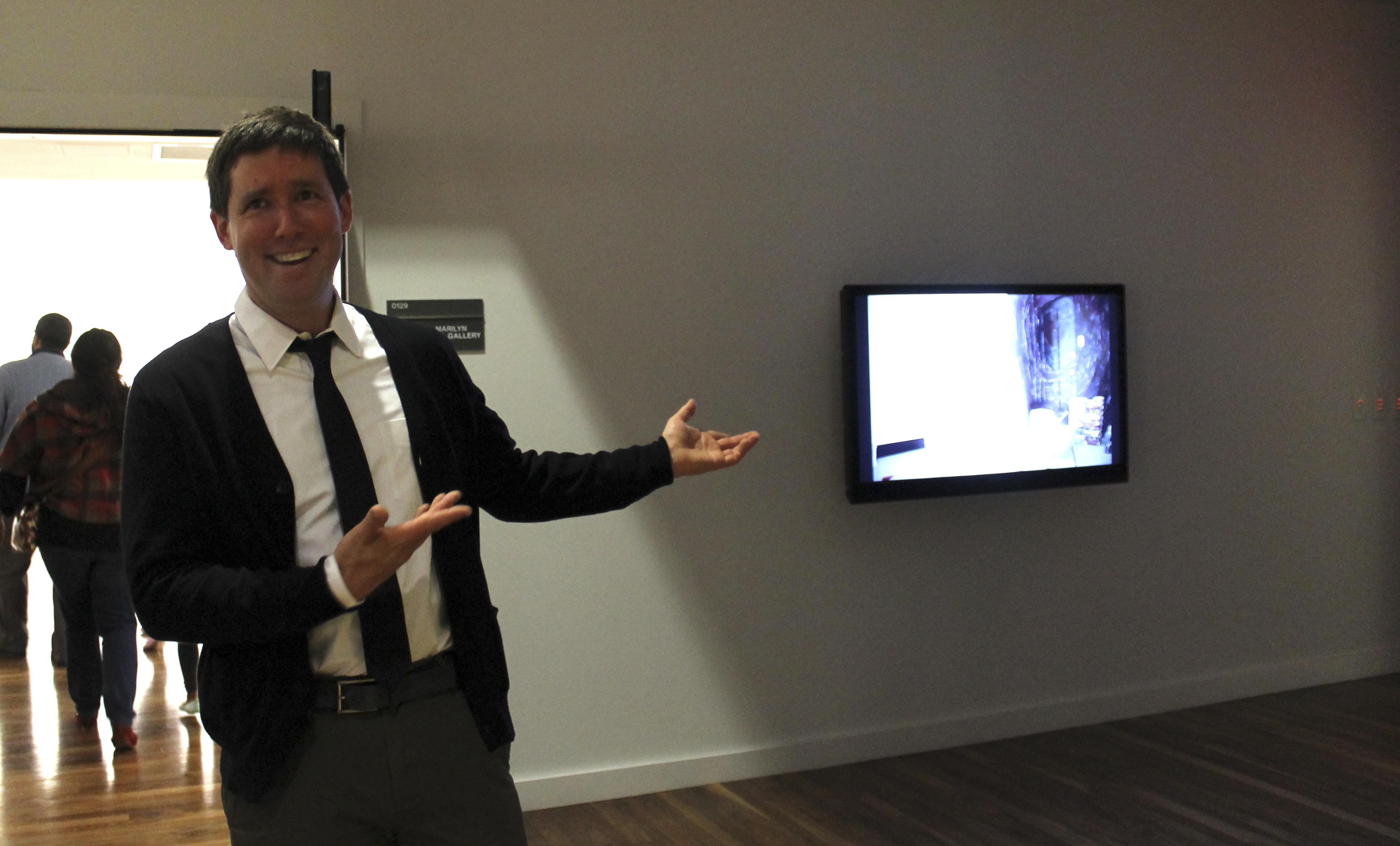 UCR ARTSblock’s Sweeney Art Gallery & Culver Center of the Arts presented the annual MFA Thesis Exhibition 2013, showcasing works by five graduating Master of Fine Arts students in UCR’s Department of Art.  Located in Downtown Riverside, the gallery featured stop-motion animation, digital projections, photography and elements of abstraction. As an attendee of the opening reception on Saturday, April 13, 2013, I was able to mingle with the artists and gain insight on the creative process.

Ordinarily, highlighter fluid is used in clerical and study settings, but artist Gabriel Arroyo created visually stimulating pieces with the office desk utensil. Arroyo’s brightly pigmented canvases are alluring and head tilting. Once I learned of the techniques and supplies involved, I was fascinated. He modestly shared the process behind the final product, which literally involved highlighters and a brush to distribute the ink. At first glance, a painting of that nature poses as something a lot more complex. However, abstractions in his paintings are thought provoking and allow the audience to experience the experimental realm of the artistic mind. The dimly lit exhibition is definitely illuminated by his work.

Rachel Bank, one of the artists, was moved by the flashing signal of a train road sign and from there developed the idea for her video projections. The installations of Bank’s pieces are a hybrid form of art. Her sculptural designs are accompanied by abstract images and unique geometric-like patterns. “Black and White, Leaners” was my personal favorite. There was fluid energy in the piece and it reminded me of the cutouts that are accomplished with artsy-edged scissors.

Nick Lowe, enthusiast of Gumby, the green clay humanoid character, applied stop-motion animation to explore form, line and color in his two videos “What the Clockmaster Gave to the Timekeeper” and “Stack Variation/Void Expansion” that are showing at the gallery. These projects were under construction since November of 2012 and it is evident in the display that meticulous craft was exercised to bring about something so unique. The animations are captivating; there are bricks that appear to be moving on their own but then a ghostly figure is present momentarily. Stop-motion animation is a technique used to manipulate inanimate objects where they are moved in small increments between individual photographs that are played at a continuous sequence to create the illusion.

I shared a couple of laughs with Justin Lubliner as he expressed preference for black and white photography and his plans after graduation. With a large grin he said, “Money, fame and power.” The charisma of all the artists was truly invigorating. Some of his objects of focus in the series “Orange Prince, Oranve Queen” were actually photographed locally on Iowa Avenue. Perhaps you’ll recognize the lonesome oranges from one of the groves.

Carter Seddon shared an interest for black and white photography as well. In the frames you’ll find a variety of sizes and objects ranging from the light reflection of a CD to a photograph of Seddon’s own spit.

Attendance is highly encouraged for those that would like to get their feet in an artsy ambiance. The MFA Thesis Exhibition 2013 will be at the Sweeney Art Gallery until May 4. Admission is free with a student I.D. and hours of operation are Tuesday through Saturday from 12:00 p.m. to 5:00 p.m.