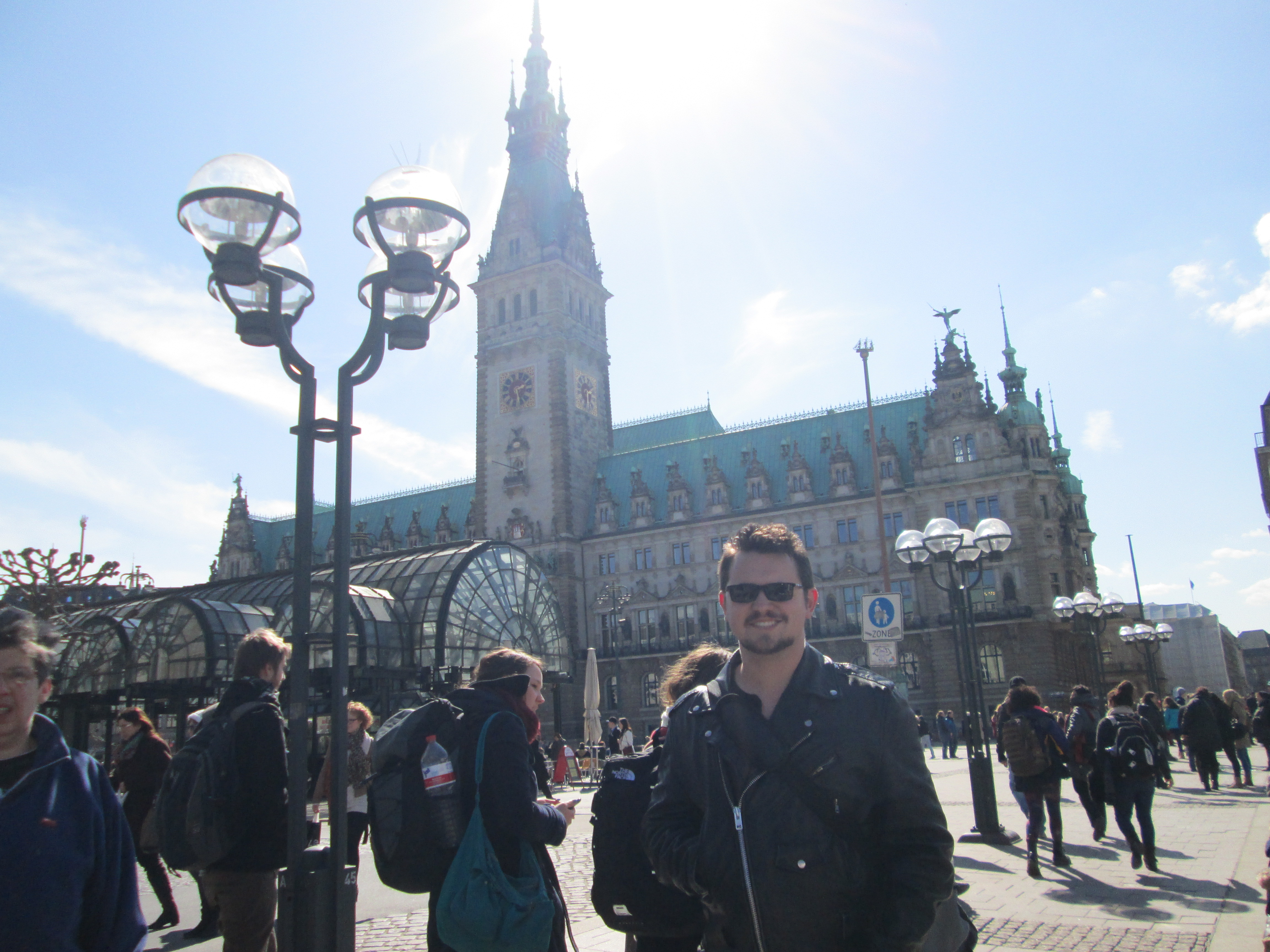 The pub was filled with the steady booming of old-school Schlager music—dwarfed in sound only by the clinking of Astra bottles and the consistent cheering of a good time. My six fellow Californians and I had been taken to Hamburg for the weekend, and had spent the day touring the lovely city and enjoying the first clear sky we had seen since we arrived in Germany. Apparently this winter was one of the longest in over a century. But now the sun had set and we had the night to explore Hamburg’s notorious red light district and club scene.

“You just took these kids to the scariest part of Germany,” a friend of one of our tutors had said earlier. “You should implant GPS chips in them or something and by tomorrow, you’ll be asking ‘Why are two of them in Hannover?’”

We left the pub and began walking the streets, which were filled with neon signs promising beer and gentlemen’s clubs promising the best girls in the city. I know I’ve used the term “Drunken Disneyland” to describe a variety of places in the past, but I think I’m going to use it no longer, because that title clearly belongs to the Reeperbahn: A mighty river of people happy and loud, flowing from one end of the street to the other, with canals branching off to even more bars hidden in corners as well as a few alleys with ladies of the night waiting for suitors.

Eventually we settled on one club featuring a live band. After shuffling through the morass of flesh and sweat that was the dance floor, we found our own little niche to enjoy the ambiance and even more drinks. However, I soon spotted a lady in the corner, alone and positively glowing in the dim red lights of the club. She was sporting a leather jacket just as I was, and thanks to a cocktail of Jäger and hopeless romanticism, I felt like there was some kind of connection in that. I sat down next to her and managed to get through the first few lines in fluent German, much to my own surprise and delight.

After switching to English, we spent the next five to 10 minutes discussing our mutual love of Pearl Jam, Soundgarden and Tool. That’s all I needed to gather enough courage to ask her to dance with me. Then when she said she hated the music, I asked her to kiss me. She declined, giving the reason that she had feelings for someone else that wasn’t in the bar. And then she asked me a question I thought wouldn’t hinder me after high school, “How old are you, anyway?”

“Twenty,” I answered, quite taken aback, “Why? How old are you?”

Scheisse. And here I thought you could love Eddie Vedder at any age.

We left that venue and soon found another to hold up in. However, Jules, Yoshi and I, the males of the group, decided to leave the rest of them behind to “check out the casinos.”

We soon found ourselves in front of one of the many gentlemen’s clubs. Seeing that the price was only five euro for going in and buying a beer, we eagerly walked inside. It didn’t take long for us to realize how much of a mistake we made walking in there. A look around the corner revealed one man who apparently paid for a room with all of the ladies for himself—leaving only two or three to laze about the club. One perched herself in Jules’ lap and was vehemently pushing for him to buy a dance or buy her a drink.

“Of course you have money. How else did you buy the beer to get in?” she replied.

“Well, they knew we were students and poor, so they let us in for free,” he said.

I’m not sure if his goal was to irritate or confuse her, but either way, that last comment made her leave. Jules and I quickly chugged our beers to give an excuse to get the hell out of there. We dragged Yoshi with us before he could even finish his, leaving him still with his bottle in hand

We were walking down the street when a lone bouncer flagged down Yoshi, poking fun of the beer in his hand. “There’s only one club in all of Hamburg that sells beer that bad and it’s the worst one in the entire city,” he said. “You came from Club 66,” he continued, “where the beer is shit and the girls are 66.”

Naturally, after hearing a joke like that, we had to enter his fine establishment. But unfortunately, we had spent the last of our lower euro bills on previous drinks. We decided to sit in the back and watch like the cheapest bastards in the joint. For a while, it was complete bliss. The dancer on the stage had a tattoo of black petals that started on her left wrist, went up her arm, diagonally down her back, across her right leg and ended at her ankle. And when she twirled up and down toward the ceiling and back, the ink flowers twirled within her creamed skin. I was mesmerized.

Then she came down and asked if we wanted a table dance. It broke my heart to whip out Jules’ tried and true “broke student” excuse. I told her that she was beautiful and that I was sorry. Then she just looked me in the eyes and said that she was sorry. This filled me instantly with regret and sexual frustration. Then I looked at the other table, and was met with the image of a man getting his groin thrashed by his own belt. If that’s what the dances there entailed, maybe I made the right call after all.

We had to relocate to the front of the stage, and not a minute went by before the next dancer went over to Yoshi, whose immediate response was to throw me forward instead. And before I could even ask what he was doing, the dancer had placed the strap of her top in my mouth. I knew it was expected of me to tip for that kind of thing, but alas, I had nothing to tip with. With her top in my mouth, I turned to Yoshi to ask for a five euro bill, but the joker was too busy laughing his ass off. Then I turned to Jules to see him literally running away in the opposite direction. Thanks, guys. So I turned back, drunk and utterly helpless. And in that moment, I could think of nothing better to do than shrug and say, “I don’t know,” which when filtered through the string, must have come out as a whimpered “EhhEyyEhh…” She promptly tugged it back out of my mouth and pushed me back into my seat. Yoshi just kept laughing.

When Benedict Jules Arnold came back, I made sure that we left before we embarrassed ourselves even further. We stumbled out into the night howling with laughter at our own mistakes and general idiocy. As we shuffled on back to our youth hostel, we made vow to come back when we could handle Hamburg’s nightlife a little more responsibly and when we could actually spend money.

The next morning, our group went to Hamburg Kunsthalle, the city’s great art gallery. In it, I found a variety of works ranging from classic paintings like “The Wanderer on the Sea of Fog” to a room with seven projectors all displaying the same spinning, screaming head. But actually, my favorite thing in that whole museum was a quote that inspired one of the pieces. On one wall, Samuel Beckett’s “Worstward Ho,” read, “Ever tried. Ever failed. No matter. Try again. Fail again. Fail better.” And it really struck me as being a perfect description of the night before. And the more I thought about it, the more it seemed to be a perfect mantra for living in a new environment. I spend a lot of each day feeling like a bit of an idiot, but I think that’s the first step in learning anything new. I’ve failed quite a bit already over here, and I’m bound to fail even more. But as long as I keep failing better, eventually, I’ll be able to consider my experiences as successes.

Nostalgia Night brings back the blasts from the past

Campus Cope: managing self-care, whether too much or too little