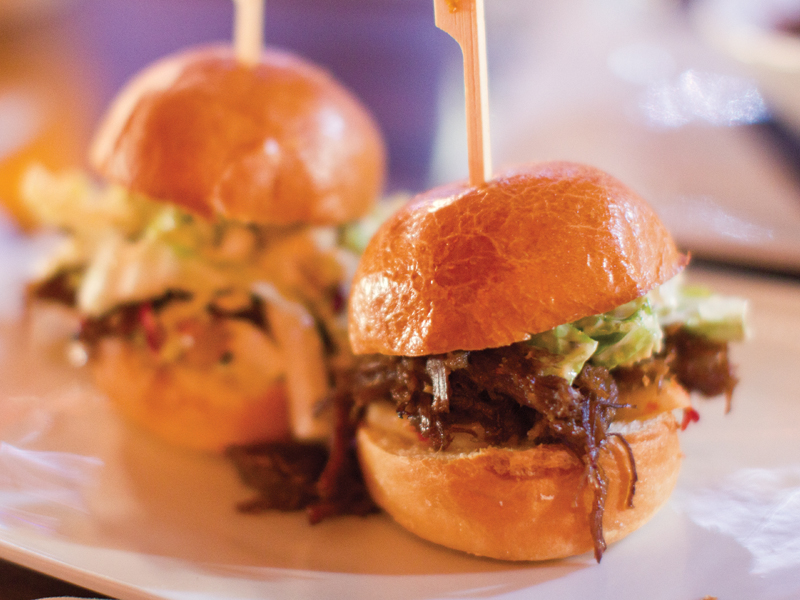 When I think speakeasy, I picture myself walking down a small concrete staircase to a large walnut-colored door where men in high-waisted jackets and short trousers, cuffed at the bottom, sit inside listening to jazz while holding a warm glass of scotch. The new bar/restaurant “ProAbition” had none of these things, except for the scotch.

To be fair, times have changed and so has society’s fashion sense. The 1920s theme is also just a gimmick to attract various college students who believe to be cultured and need a trend to subscribe to. However, I cannot help but still be disappointed with the décor of the recently opened “speakeasy,” if one could really call it that.

ProAbition is rather another bar trying to be something it’s not, which makes the atmosphere come off as confusing instead of alluring. While sitting there on my barstool with my Black Beauty Cream Stout in hand, I actually thought about “The Salted Pig,” another bar/restaurant that did the same thing ProAbition is doing now, except they were more on the nose with it.

Aside from the theme and its identity crisis, I did enjoy my time at ProAbition. Whether or not the place really fit into its own angle was only a minor letdown, and it was hard to blame the eatery for taking a modernized look at a glorified era. I just wish they would have changed the music—electronica in a “speakeasy,” really?

The upsides to ProAbition were the two reasons I wanted to check out the saloon to begin with: the food and the booze. To start, I decided to sample a few beers. They had a nice selection that included a good amount of craft beers, some of which are from local Riverside breweries. After some sampling, I decided to go with the regional brew, the Black Beauty Cream Stout. The cream stout was exactly my kind of beer, it was thick and bold with a rich dark-roasted malt aroma and a coco-vanilla aftertaste.

Speaking of the food, which is discounted along with the drinks during Happy Hour, there are some wonderful choices to pick from. One notable thing is that the menu is fairly diverse and provides a lot of options to the clientele. The appetizers are also some great upscale finger-food for college students looking for cheap eats and a drink from 5-7 p.m.

If one decides to visit when it is not happy hour, they will notice that the prices are relatively expensive, especially the entrees. Personally, I decided to stick with the tapas as they are more easily shared and were better for a drinking hour with friends.

One suggestion for students would be the shoestring blue cheese fries. You can get fries anywhere, but they are definitely the most convenient during a night out in downtown and the unique take was hands-down delicious. The fries definitely solidified my newfound love for blue cheese.

We also decided to try the Tandoori chicken, pork belly mac ‘n’ cheese and Kim Chi’s sliders. The mac ‘n’ cheese was nothing special and the noodles and cheese were the typical gooey comfort food that I expected. The dish wouldn’t be worth the price without the succulent pork belly that accompanies it.

Kim Chi’s sliders were not as good as I had hoped for. I fancy myself a fan of Korean food and I was interested in how the dish would be presented. The chef deserves points for presentation, but the sliders could have gone without that extra pinch of salt, and the pork needed less time over the fire since it was a bit dry. Nonetheless, the bread was tasty and fluffy and the vegetables were very well done and blended pleasantly with the barbecue sauce.

My favorite of all the dishes was the Tandoori. The chicken was moist and marinated perfectly. The hint of lime gave the dish an unexpected kick in the midst of savoring the chicken, pickled onions and cucumber salad. The decision to throw it all into a pita was also the right move, being able to snack on the cuisine like a taco made it all that better. I also wish I would have asked what sauce they used because it a subtly sweet addition that worked well with the chicken and the veggies.

ProAbition may not be an ideal 1920s hangout, but it is absolutely worth checking out if students are searching for a good time that can be spent in a velvety red upholstered booth around a whiskey barrel where some good food and drinks are in abundance. Plus, there are jazz and burlesque shows throughout the week, and if you like the establishment on Facebook, you can receive “speakeasy specials” that require a code word to obtain from the barkeeps.