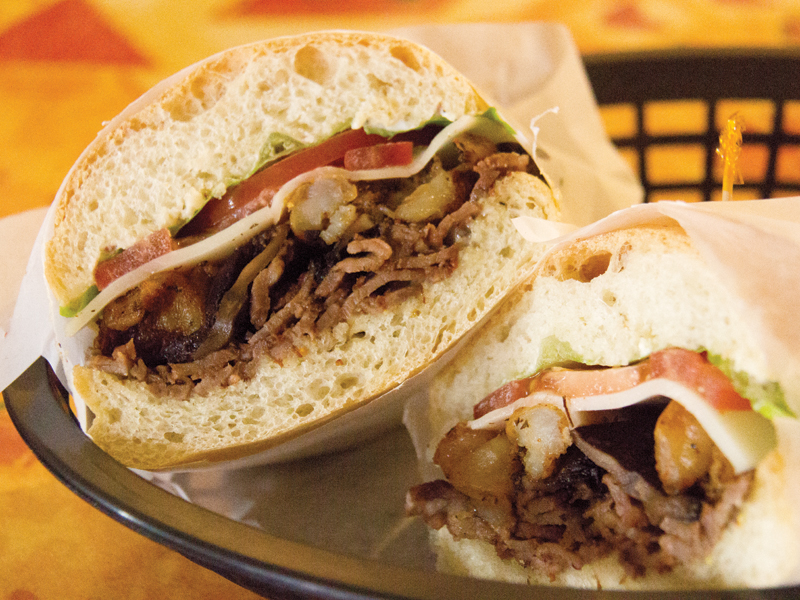 Solid off-campus restaurants are somewhat hard to find. Students usually have to sprout wings to find quality food within a five-mile radius and do it on a student budget. Then, when something new emerges in Riverside, it seems like it is the campus’ little secret. This theory was no different when it came to the Baguette Bakery and Cafe. One would expect that the bakery, located just short distance from campus at the University Shopping Center on Blaine, would receive a flood of students yearning for warm pastries and hearty sandwiches. However, they day I went may have been an off day.

Approaching the entrance to Baguette, the scarce patio setting was bombarded with students enjoying some sort of treats. But those treats weren’t from the actual bakery, however. Once in, the a gust of Febreze and bread welcomes any entering customer. The restaurant is engulfed with warm, autumn colors and modern lighting hanging overhead. If it wasn’t for the waxed floors and attended tables, one would assume the restaurant had been abandoned. Finding a seat was not an issue, neither was finding the menu.

Three menus were mounted on the wall, offering seventeen sandwiches (four of which are vegetarian), six salads and four warm entrees. The one of two employees popped behind an oven door at the sound of customers pondering over meal choices. She informed us that the most popular choice was the Signature Rotisserie Chicken Sandwich. It sounded intriguing from the start, as well as the Signature Steak with Shrimp. Even though I just wanted to try the food and not worry about dessert, my stomach emitted sounds of a dying whale with the thought of desserts. My eyes wandered across all menus and counters in search of sweets, pastries or chocolates at least. “All we have is what is here in the basket,” the employee explained, ruffling the two baggies of oatmeal raisin cookies and cellophane-wrapped chocolate chip scones. I decided to go with the chocolate chip scones. My final order ended up to be half of the Signature Rosemary Chicken Sandwich ($4.75), the full Signature Steak with Shrimp ($8.25) and three mini scones ($1.25).

Pictures of a variety of coffees rested above the booth seating in the front of the restaurant, next to the basket of plastic bread that read “Display Only.” Top 40 music played through cracked speakers loud enough to cover the noise of oven doors slamming in the kitchen. Not long after, the order number was called.

Both sandwiches were made on ciabatta bread, even though the menu gives bread choices of ciabatta, baguette and whole grain. I was very eager to try the Signature Chicken Sandwich to find what all the ruckus was about. However, I was still searching for it by the last bite. Since ciabatta bread is known for its robust quality and hard exterior, the first bite was rather challenging for such a thin sandwich. The rosemary made its appearance within the smear of mayonnaise covering the top layer, sticking to a sheet of romaine lettuce, a single slice of tomato and shavings of chicken breast. The rosemary mayonnaise almost reconstituted the taste of the dry chicken shavings. After the first bite, it tasted like a Thanksgiving leftovers.

Tasting the Signature Steak with Shrimp was a happy turn of events. Because of the thickness, the ciabatta bread actually complemented the depth of the flavors. The first thing I tasted was the savory bud as the Cajun seasoning used to grill the shrimp melted with the subtle jack cheese and hearty portobello mushrooms. I realized that it was roast beef instead of steak. It was delicious nonetheless. The shrimp stayed warm to the last bite and roast beef juices nestled within the walls of ciabatta. Despite the higher price, the Signature Steak with Shrimp is definitely the most overlooked item on the menu.

I may have rushed through the sandwiches just to taste a dessert. They looked like three scoops of chocolate chip cookie dough when caressed in my palm. As I broke it in half, the moist crumbles trickled onto the table. As I took a bite, the cloud reached my tongue and dissolved instantly, leaving me with chocolate lip liner. The scone was a little too salty, a possible result from baking with salted butter instead of unsalted. When biting into a scone, one wants to indulge in rich, buttery taste instead of having it swell up in the fingers from too much salt. In the end, I felt like I had peanut butter stuck on the roof of my mouth, trying to release the thick coating plastered on the bridge.

With the balance of mediocre sandwiches and average quality sweets, Baguette Bakery and Cafe is simply another cheap eatery for students to consider. It was not a total disappointment of an establishment, but it was okay.