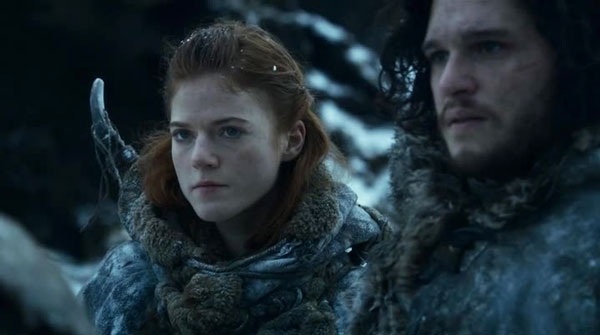 Wow. Season 3 of “Game of Thrones” is making its previous two seasons look like warm-ups. “Kissed by Fire” was everything I could have ever hoped for in an episode: drama, dialogue, acting and plot. Everything was a dream come true. No buttocks, blood or political intrigue was spared when putting Sunday’s episode together. It hurts me to know that we are already halfway through this season.

We open with a greatly choreographed fight scene between the Hound and Lord Beric Dondarrion, who wields a great sword lit on fire in honor of the Lord of Light. To the chagrin of BWB and especially Arya, the Hound prevails, slicing through Dondarrion’s torso and killing him. However, Thoros is able to revive the fallen warrior. Dondarrion has been revived six times by Thoros, and when poor Arya asks if he can bring back someone that has lost their head, Thoros replies quietly that it doesn’t work that way.

Arya doesn’t seem to be getting much of her way these days, as just moments earlier we see a tear-jerking scene between her and the only friend she has left: Gendry (Joe Dempsie). As the smith, Dempsie always becomes a fan favorite in every role he portrays, mainly due to his ability to disappear into his roles. This makes the audience more likely to believe, sympathize and relate to him. There is also considerable chemistry between Maisie Williams and Dempsie, and the part where Arya says, “I can be your family” with tears in her eyes and forced strength in her voice broke my heart. The two actors are relatively young, but they understand their characters and their relations to each other so well that it’s going to be hard to see our spunky little tomboy and favorite smith part ways.

In the icy north, Jon Snow finally gets a taste of warmth as he seals the deal with Ygritte, and the two express their mutual like for each other––which is saying a lot, especially for the feisty redhead. Jon Snow’s plot is seriously lacking movement, but at least he’s finally felt the touch of a woman before he’s forced into going to battle against his own sworn brothers.

British actor Stephen Dillane really knows how to bring emotions to a guy who’s known for being as expressive as a rock. This week we get a sad glimpse into Stannis Baratheon’s torturous and cold family life. His wife, Selyse of House Florent, is creepy, and I mean much, much creepier than she is in the novels. She is introduced praying over a fire to the Lord of Light, and when Stannis comes to confess his sins for having wronged her, she instead says that the Red Priestess has told her everything. In her eyes, nothing done in the service of the Lord of Light is wrong. Not only did that shock and disgust Stannis, but Selyse also keeps all her miscarried sons preserved in clear jars. They are open for all to see as a constant reminder that her and Stannis produced heirs, save for a daughter, Shireen, whose face is disfigured by a disease known as greyscale.

Young English actress Kerry Ingram was able to capture Shireen’s shy-yet-sweet demeanor through her interactions with her emotionally stunted father. She also captures her character’s caring, stubborn nature when she visits her favorite friend, Ser Davos Seaworth, in the cells. In a touching moment, Shireen patiently teaches the Onion Knight how to read, starting with a book about Aegon Targaryen. This leads to a great transition across the Narrow Sea to Essos.

After last week’s excitement, we don’t get much in terms of Dany, but there is a short scene between Barristan Selmy and Jorah Mormont that may be important later on. The men seem to get along as they share their wartime stories, but Selmy wastes no time reminding Jorah that his reputation in Westeros is ruined. It may not bode well for Dany to have Jorah at her side when she returns to the Seven Kingdoms. This obviously doesn’t sit well with Jorah, who replies that he has protected Dany from the beginning and Selmy is an exile now just like him, and only their queen can judge them, not each other. It’s a bit murky to deduce where the writers are going with Jorah’s storyline as it has been changed quite a bit from the books after Selmy’s role change. But seeing as the writers and producers have done a spectacular job with season 3 so far, I have full confidence that they will take Jorah wherever he needs to go.

Once again, I’m going to have to continue the Sansa bashing. The girl is duller than a butter knife. Littlefinger, as sly as he is, uses one of his spies to get information out of Loras through some sweet pillow talk. He discovers that the dashing, homosexual Loras is set to wed the Stark girl. Littlefinger goes to confirm the matter himself, and Sansa basically proves everything by unconvincingly saying she’d like to remain a hostage because she doesn’t want him to get into trouble. I face-palmed. I can go on and on about how much I want to throttle Sansa, but I’d rather move on to better things.

The best acting and scene I’ve seen so far out of the all three seasons (yes, it’s that good): the long-awaited for bath between Brienne and Jamie. Coster-Waldau could not have been a more perfect Kingslayer; not only does he look the part of the suave, arrogant knight, but in “Kissed by Fire,” he took Jamie to a whole new level by showing the deeper side of him that not even his own family has seen. His delirious speech about Aerys the Mad King shed some much-needed light on why Jamie broke his oath: rather than kill his own father and let the Mad King burn all of King’s Landing to the ground with wildfire, he chose to plunge a sword into the king’s back so he can never give the orders. Ned Stark had found Jamie after he had slain Aerys and judged him guilty, and Jamie has kept the real reason why he killed the Mad King secret ever since then. After all, what good is a Kingslayer’s word against the honorable Lord Stark? As he swoons from the pain of his injuries, he whispers to a dumbfounded Brienne, “My name is Jamie.” Coster-Waldau’s delivery, facial expression and hazy eyes had me holding my breath for the entirety of his soliloquy, and truly cemented Coster-Waldau as a more-than-capable actor in my eyes.

There was also much plot development for Robb Stark, as his banner man Lord Karstark took justice into his own hands and killed two young Lannister squires taken as hostages by the North as revenge for the Lannisters slaughtering his sons in battle. Trying to prove that he is a just leader and following in his father’s footsteps, Robb executes Karstark himself on the ground of treason. It may not have been the wisest move, as his mother, wife, uncle and great-uncle all suggested that Robb keep Karstark as hostage so as to not lose the support of the Karstark soldiers. After the execution, Karstarks’ men predictably abandon Robb, taking half of the Young Wolf’s forces with him. This leaves him vulnerable and his days numbered. Proving himself to still be an apt strategist, he plans on attacking the Lannisters at their home, in Casterly Rock. To do so he will need the support of the man he had slighted: Walder Frey. It’s hard to imagine that Robb is supposed to be a boy of just sixteen in the book. As young as he is, he married for love, betraying the contract he made with the Freys––an act very unlike something his father would do. Robb plans to win back the Freys with a proposition, and the fate of his army and victory is totally dependent on whether or not Walder Frey will accept the new terms.

This season has not been kind to Tyrion. With so many new players added, the little lion has been temporarily pushed to the side as a secondary character, rather obsessed with his new job as the Master of Coin. It would almost, almost seem as though he’s admitted defeat and is carrying out his job to the utmost importance to curry whatever favor he can from his cold father. He’s also finally met his match with the Queen of Thorns, who proves at her ripe old age that she’s still smarter than all the Lannisters combined. Thanks to Littlefinger, Tywin discovered the plot to wed Sansa into the Tyrell family, and is infuriated that the Tyrells think they can seat one of their own in the North. In order to prevent the union, Tywin makes it clear that Tyrion is to wed Sansa and put a child in her. Tyrion is repulsed by the idea of claiming a child who has already suffered so much under Joffrey and the Lannisters, but Tywin and Cersei sees this marriage as more than what Tyrion deserves. Not only will he get to marry a pretty girl with a very old name, but he will be Warden of the North and Lord of Winterfell as Sansa is the only heir left. Tywin is convinced that Robb will fall sooner than later, and the Seven Kingdoms are under the impression that Theon Greyjoy killed Bran and Rickon.

Just as Cersei was gloating over her little brother’s massive discomfort, Tywin slaps her upside the head with the fact that she has to marry Loras Tyrell to secure a claim in the Reach and produce another heir ASAP. She is thoroughly opposed to the idea, and for good reason, too––despite being a despicable character, Cersei has been forced to do her father’s bidding all her life, first offered to Rhaegar Targaryen, then to Robert Baratheon. She is treated like a “broodmare” and is indignant that her father will put her through that again. Ruthless as he is, Tywin spat that the marriage will finally put to rest the disgusting rumors surrounding her and Jamie.

There really wasn’t much room for complaints this episode, but I did note the lack of Bran and Theon. I wish they had replaced the Jon Snow scene with something from Bran, but then again, fans have been waiting long enough to see Snow and Ygritte do the deed. Their relationship is a welcomed comfort and serves as a warm contrast from the family of Stannis, Arya’s loneliness, the Lannisters and even the ever-scheming Tyrells.

“Kissed by Fire” is definitely one of the most solid episodes in all of “Game of Thrones,” the wheels and cogs are well-oiled and chugging steadily forward, and I have a feeling the last five episodes will change the face of the game completely.