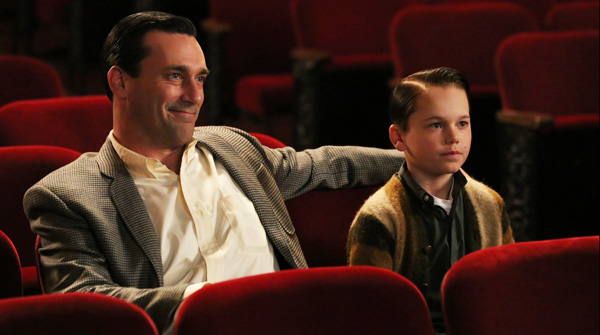 “Mad Men” has always done particularly well when dealing with poignant historical events. This week was done elegantly. Of course, the series would not be its typical triumph if it did not continue to misdirect audiences. Even with something as sensitive as an assassination in its newest installment, “Mad Men” does an extraordinary job keeping the attention of its audience while still squeezing in subtle symbolic teases.

“The Flood” began like any other episode, so I expected a few confrontations, flirtatious interactions or maybe a flashback or two into Don’s childhood. My first mistake was expecting to stay one step ahead of the show. When the assassination of Martin Luther King Jr. was thrown in almost halfway into the episode, I was just as shocked as the characters.

King’s death was a tragic day, and also one that is widely known. Although saddening, “Mad Men” was very effective at catching its audience off guard, which ultimately led us to become emotionally bonded with the characters. Aside from this, the death of the great speaker and political activist allowed for some substantial character arcs.

At first, the stage was set while we witnessed Peggy on the search for a new apartment, Don and Megan heading out to an awards banquet and copywriter Michael Ginsberg being set up on a blind date. All the storylines were developing fairly well. Although, I should have known that “Mad Men” would become a lot more devious, especially when we are told that Paul Newman––standing a great distance away at a podium during the awards ceremony––was apparently giving the opening speech. But, as we squint at Newman (much like the characters) we are hit with the distressing news of King’s death.

From then on, the whole episode shifts and fans are given a look into the true nature of the front runners for the show. Pete Campbell dumps his shoddy personality for the rest of the hour as he reflects on the recent tragedy. Even though Pete has come off as pompous in the past, he was ahead of his time. When we see Pete feeling upset and sympathetic about the situation, we do not doubt his emotions.

Granted, Pete’s disparaging of Harry Crane was partly due to his new living situation, which currently does not include his wife, Trudy. However, Pete actually did take offense to Crane’s mentioning of the clientele wanting their money back for forestalled ads and his blasé attitude concerning their recent misfortune. What bothers Pete is the fact that the clients should be taken aback by the state of things rather than wrapped up in their wallets. Pete does care about the company––probably more than most considering his progressive ideas, once suggesting to market toward African American consumers. He simply knows that bigotry is harmful for a business.

The argument between Crane and Pete is one of the reasons that the episode worked so well. Besides the cast, like Kartheiser and Sommer doing some fantastic work, the heavy thematic writing gives substance to many of the characters who try to tighten the gaps between their friends, family and cohorts.

Peggy and Abe are among those who begin to grow closer throughout the episode. Peggy especially is coming to some realizations about her involvement with Abe. They were apartment shopping with one another; does she not know that things are getting serious? Perhaps she does, but Peggy is much like Don: they both have a subconscious need to distance themselves from people, though the possibility is unavoidable for Peggy as Abe casually mentions the possibility of children. It seems the thought never crossed Peggy’s mind, and it makes us realize how unaware she is about the things that aren’t wrapped up in her job. I’m curious to know if the relationship will work, because I do like Abe, but after some suggestive looks from boss Ted (Kevin Rahm), we cannot be too sure how it will all hold up.

No one really knows what tragedy means to Don, but it did bring an emotional downpour onto Megan as Don sipped at his scotch and gave one of the best monologues I have ever heard about being a parent:

“I don’t think I ever wanted to be the man who loves children. But from the moment they’re born, that baby comes out and you act proud and excited and hand out cigars. But you don’t feel anything. Especially if you’ve had a difficult childhood. You want to love them but you don’t. And the fact that you’re faking that feeling makes you wonder if your own father had that same problem. Then one day they get older and you see them do something and you feel that feeling that you were pretending to have. And it feels like your heart is going to explode.”

The diatribe was a result of spending some quality time with his son, who was scolded early on by his mother, Betty, for tearing mismatched wallpaper from the partitions in his room. I wouldn’t mind seeing Betty gone for good, along with her husband, Henry, since they are two very disinteresting characters at this point. However, I cannot help but think that the peeling of the wallpaper was some sort of symbol––but the clearer one was “Planet of the Apes,” which Don and his son went to see. The ending of “Planet of the Apes” is all too appropriate for “Mad Men” since it emphasizes how many of the characters always assume the worst will happen, and it usually does.

“The Flood” was full of conflict, and almost the entirety of the episode was about an attempt to connect with people. The only problem is that no bridges are really gapped. Pete may never get back with Trudy. Peggy has doubts about her own relationship, and Joan is utterly confused about the state of her life. Even Roger Sterling is a lonely man, and even though he attempts to bring in a possible client (since his only other duty is to be a sarcastic drunk of a man), the blatant honesty of the client’s proposed ad campaign would not be graciously accepted by the public, to say the least.

As for Don, he finally has some sort of love for his son, but what about his wife, Megan? They have been growing apart for a while, and even Don’s mistress, Sylvia, seemed far away from him during the hour since they hardly even spoke. Sure, there are plenty of people around Don. But in the end, he is alone on that balcony, and much like the pitched ad campaign, he may be too much to handle.