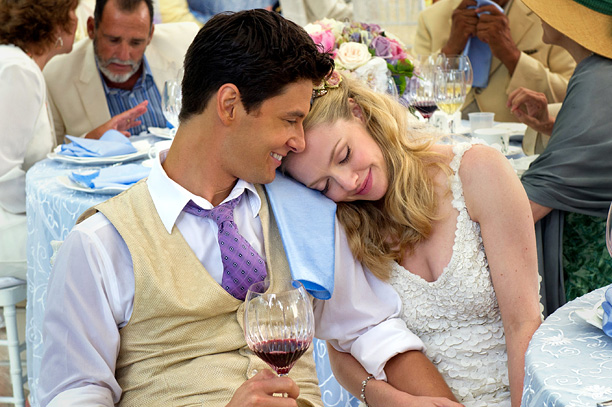 “The Big Wedding,” directed by Justin Zackham (“The Bucket List”), explores a trending subject in today’s television shows and movies: the modern family. As cliché and uninteresting as it sounds, viewers are in for a pleasant surprise.

I know what you guys are thinking: not another romantic comedy! Interestingly enough, the focus of “The Big Wedding” is less about the bride Missy (Amanda Seyfried), and groom Alejandro (Ben Barnes), and more about the groom’s crazy family. Allow me to break down this recipe for disaster through its interesting wedding guest list. The groom’s adoptive parents, Don (Robert De Niro) and Ellie (Diane Keaton), are divorced. Don left Ellie for her best friend, Bebe (Susan Sarandon). Also in attendance is the bride’s plastic-surgery obsessed mother-in-law and equally weird father-in-law. But when the groom’s Colombian, anti-divorce, biological mother (Patricia Rae) is thrown into the mix, Barnes’ American parents have to pretend they were never divorced. Do not expect this wedding to go smooth.

A romantic comedy has not done its job if it is not packed with laughs.“The Big Wedding” almost fulfills this duty. The juxtaposition of two cultures and exploration of unique family dynamics gives the movie the potential to be a great comedy, but its execution is poor. A notable disappointment was the toned-down comedy of the usually lively Robin Williams who plays the pastor at the local church. When Williams is presented as the sanest member of  the cast, there is a big problem with the script.

The blame falls on Zackham, who does the same with his other Academy Award winning actors. It is every director’s dream to have De Niro, Keaton and Sarandon together in one movie, and Zackham should have explored how deeply they can delve into their characters and their ability to drive a plot.

The plot gets lost in irrelevant matters––like introducing a 30-year-old virgin brother––and focuses on the personalities of the characters, but not on the problems they are facing. Everything feels one-dimensional with “The Big Wedding,” but one-dimensionality is not enough to steer a movie. At the same time, the characters have the potential to tell a great story; they are flawed, selfish and real just like the rest of us. For instance, the kids of the family took sides after Don and Ellie’s divorce, leading to disconnection within the family. Situations like these reflect reality because like everybody else, the kids are confused about how to react and behave––especially when new people enter their lives. This is seen through the first encounter between the groom’s adoptive parents and biological mother.

Everything about the plot seems choppy and takes the audience all over the place, as if they are not sticking to one script. For example, the groom’s sister (Katherine Heigl) has a fertility problem and relationship issues with her husband that strays away from the plot. A movie is better when everything is tied together, and “The Big Wedding” fails to do this. More than anything, it is reminiscent of the way today’s reality shows put a bunch of crazy, but lovable, people together and see what happens.

Still, there is something about “The Big Wedding” that will resonate well with its audience: the importance of family in all its shapes and forms. Although this is a cliché theme, it is done in a different, beautiful light because the relationships defy the norms of a traditional family. This is seen through the chemistry between the characters, especially those from unexpected relationships. For example, that of the mistress Bebe and the ex-wife Ellie––or the adopted son Alejandro, with his biological mom (Rae).

The only reason why the movie is worth watching is the characters and how they interact. The reunion between Heigl’s character and her estranged father brings a lot of laughs as they go bicker back and forth about picking sides after the divorce. The cinematography and symbolism is visually stunning as well: the oak tree, seen in many scenes, symbolizes the journey of life and the changes that come along with it.

Overall, this movie evokes happiness due to the chemistry of this unique family. At the end of the day, that is what any audience member would want. Towards the end of the movie, Diane Keaton’s character fittingly says, “I am feeling all kinds of love.” The audience will leave the theater feeling the exact same way.