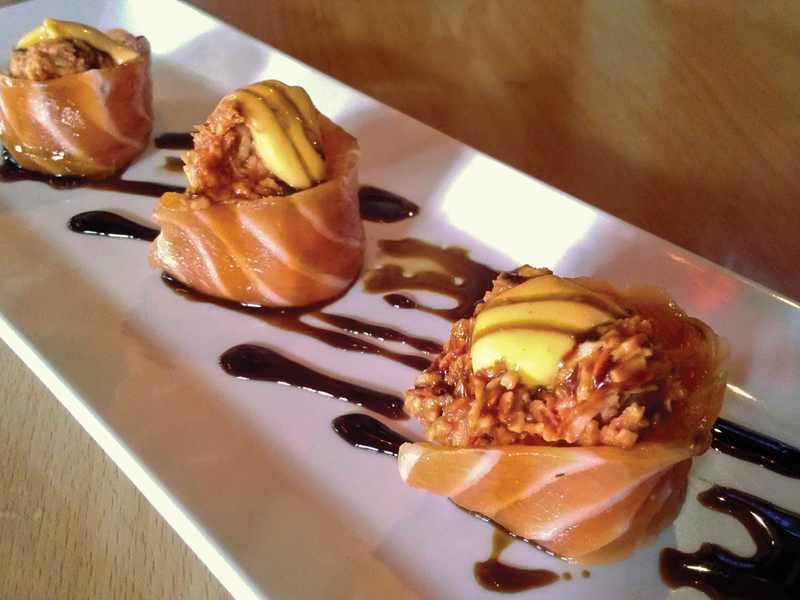 The city of Riverside seemingly has two temperatures: tundra and Hades. The simmering spring days of May urge students to flee from the heat and find refuge anywhere with an ounce of shade, cool air and refreshing food. Luckily for me, I found the place to get away from the sun rays in Asahi Sushi. Located a few miles off campus, Asahi Sushi is a place where students and families can get away from the desert of Riverside and enjoy the ambiance and food for the hour or two they’re there.

Asahi finds itself nestled in an hidden gem of a shopping complex right behind the Van Buren Drive-In. Once we completed the endless rounds of finding parking, we made our way to the entrance. A formal patio, lined with bamboo shades and dusty heating lamps was cluttered with loud chatter and hungry guests. Inside, the cool environment welcomes anyone to stay. Fortunately for us, we arrived right after the lunch rush. However, the place was packed cheek to cheek with only two-seater tables lined around the wall. I was a little disappointed not to get the full effect of watching the sushi masters complete each dish with the finesse that they usually do. The waitress informed my friend and I that we were actually lucky since there was only one table left.

As we wiped the sweat off our foreheads from just the walk from the car to the restaurant, the waitress took our order of an ice water and all-you-can-eat (AYCE) sushi. Now some people refer to me as cheap, but I like to say I’m frugal. With sushi being my favorite meal and also my wallet’s worst enemy, I find that reasonably priced all-you-can eat-sushi deals are the way to go. At a lunch price of $17.99 and a dinner price of $20.99, Asahi is reasonably priced and quality assured.

The AYCE special includes appetizers from the kitchen, individual sushi and hand-cut and specialty rolls. The menu consists of every sushi craver’s dream: Salmon kama and baked lobster specialty roll. Asahi also gives customers choices of individual meals as well as a kid’s menu. With our stretchy pants loosened and sushi appetite screaming, we took advantage of the special. Ordering the sashimi salad, miso soup and baked green mussels to loosen the pallet and an interlude of albacore, fresh water eel, and mackerel sushi, my stomach’s grumbles told the waitress to put a step on it.

Waiting for our food to arrive was no problem; the guests can take in the decor that hugged the room to pass the time. Red lanterns glowed over the floral fans hanging over head. ESPN hummed behind the sound of K-pop that gave guests something to tap their feet to as they enjoyed other’s company. The place was so cluttered with hustling people, but the waiter’s diligence was duly noted as the food came out at a surprising speed. Little did we know, our two-seater table would almost collapse with the avalanche of food. We had to resort to placing all table toppers on the ground just to make room for the eight plates and two glasses we had.

I dug into the sashimi salad, dying for a refreshing bite. Diced salmon, tuna and white fish were tossed with arugula and orange vinaigrette. The sweet and slightly bitter vinaigrette meshed well with the bitter greens, but just played in the background behind the notes of the smooth fish. The baked green mussels balanced out starters with its hearty and creamy attributes. On that note, however, the mayonnaise sauce that created the sweet crust over mussels as they broiled was a little too rich by the second bite. By the time I completed the order, I had to shift in my seat to make room for the next entrée: the sushi.

Some could debate that fish tastes the same everywhere. That’s not true. The amount of care and attention that the sushi chef and their carrier put into making the meal added to the outcome. With that said, I was very pleased with the freshness and crisp taste of the albacore and Mackerel. Albacore is known for its sweeter tang, which pairs well with Sriracha or any spice. Mackerel can be a little more overbearing because of its strong fishy taste. But I say: When in Rome, swim with the fishes!

As the elastic around my pants deteriorated, we ended the meal with the special rolls of Jen Jen and Shrimp Boat. The shrimp boat had to be my favorite. What could be better than deep-fried food and seafood together? It is a mixture of fresh crab and shrimp rolled in panko and fried to create a harmony of a crunchy, light and creamy meal. It was topped with spicy mayo and eel sauce which usually has a sweet tangy glaze. This, on the other hand, tasted more like A1 steak sauce. It had an unusual taste, with a hint of ketchup, which really did not mix well with the fish. With that said, the eel sauce soaked the Jen Jen roll to the point where the scallops wrapped in fresh tuna were drowning in it. Definitely not a favorite, but something to consider if you want to try Japanese-style barbecue sauce.

The meal overall was something to remember. We got our money’s worth we left with rice busting at the seams from so much food. Asahi is one place that tops in my sushi repertoire, especially in Riverside. With summer days stewing, Asahi can protect anyone from the heat with their fresh delectables. I was new walking in, but I feel like I can become a regular after today’s visit—if I had deep pockets.