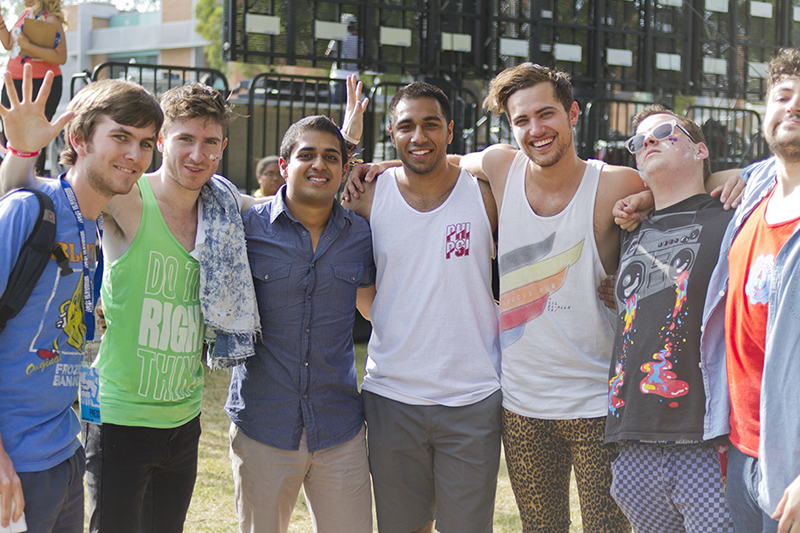 Fresh off their set from Spring Splash, Walk the Moon sat down with me at the HUB to discuss, among other things, late-night food, “Teenage Mutant Ninja Turtles” and how they feel at home playing colleges. Members Nicholas Petricca, Kevin Ray, Sean Waugaman and Eli Maiman have been on a frantic touring schedule ever since their debut major label album “Walk the Moon” came out and their hit song “Anna Sun” blew up the airwaves. Here are their (occasionally sleep-deprived) responses.

JR: Thank you guys for doing this on the crazy schedule you have.

EM: Thank you for having us.

JR: You’re in between tour stops in Europe and Australia—how is it to be back in the states for at least a little bit of time, or are you just so jet-lagged that nothing makes sense anymore?

EM: It almost doesn’t count, we got like 24 hours at home. I’m trying to do laundry and get ready for the next trip.

JR: So you went back to Cincinnati then?

NP: To our respective homes. Some of us live in Columbus and have girlfriends in Indiana and that sort of thing, so we went back to our respective places of rest and then hopped back on the plane..

KR: I had enough time to walk in. My dog bit me in the crotch, and I was sad and then I left. That’s pretty much it.

JR: I saw on your website just in the past couple days, “Big news coming soon,” popped up. Is there any kind of hint you can give me on this?

NP: Yeah, we’re actually just going to go out and get a bunch of tattoos.

JR: Walk the Moon does hip-hop?

NP: I don’t know if we’re really at liberty to say.

KR: But it is big and we’re really excited just to get some…things going, towards the end of the year and—

KR: I see a castle, and a mountain—

EM: ––and a dragon. There’s magic. And there’s lots of stars and ice.

KR: Baloo is there and it’s a party.

EM: Something like that. These are real but they’re just really, really unhelpful. Actually we have no idea what you’re talking about. [laughs] Next question!

JR: You guys have been classified in kind of a lot of different genres like art rock, pop, alternative dance—how would you classify yourselves if you could, because you’re kind of diverse.

NP: A fiesta of delights.

EM: The unfortunate result of four men with ADD.

NP: It’s hard doing the genre thing because you know––we are a product of many different influences.

JR: Who would you say are some of your biggest influences?

NP: Probably something like the Talking Heads and the Police, Bowie, Prince.

NP: Stuff that I think is seeing a big resurgence now, and it’s just going to get even more popular and you know, it’s exciting. It’s an exciting time.

EM: We feel really lucky to have all this support from Los Angeles. L.A. has definitely been a big early adopter and continued adoption…continued foster care.

JR: [Southern California] has kind of got the easy breezy thing going on like your music. The synthy light stuff is good for L.A. and the beach.

NP: We’re from Ohio, we don’t know what the beach is… What is water?

JR: So you guys have a lot of college-themed songs, in particular “Anna Sun.” What would you say is different about playing at a college or festival as compared to a normal show?

KR: A lot of our fans are of that age, it’s a pretty popular group that comes to our shows.

NP: Yeah, I don’t know, I kind of see like, you know in middle school for instance, the fifth graders get all excited like the little kids, but the eighth graders are trying to be cool? I feel like in college, you’ve forgotten all that and you can be like a big kid and still go nuts, and feel good about it. I think it’s a consistent thing that every time we go to a college there are people just letting go and they feel free to be themselves. We feel at home in the college circuit.

JR: I’m going to do a little lighting round of potpourri and see what you guys think. Our mascot is a bear called Scotty. He wears a kilt and he has a sword. Do you think you could win in a fight with him?

NP: We can’t win in a fight against anybody. I would just be afraid if I had a kilt and a sword—I would wear a jockstrap under that kilt. I don’t think we answered one of your questions, I’m so sorry. [laughs] I’m saying I would lose the fight with myself.

JR: Can you actually lift a car by yourself?

JR: Satisfactory. Favorite late-night food? Where from or what kind?

EM: In Cincinnati, we have this special chili that’s different because it’s a little more of a sauce and we put it on spaghetti and hot dogs with lots of shredded cheese. The Coney Island is how the rest of the country does it but we know it as a Coney. [laughs]

EM: A cheese Coney. That’s pretty much the late night staple in Cincinnati.

SW: Although I prefer Roscoe’s Chicken and Waffles. Whenever I can get it. Might do that tonight.

JR: Favorite cartoon as a kid?

KR: I continue to be a “Simpsons” fan.

EM: Everything though. We watched everything. We have a lot of nostalgic moments when we see a ninja turtle. For instance, we were on tour in Europe recently and Nic went out and bought the entire first season of “X-Men.”

NP: On the box it said over six hours of action, and we got through about three.

EM: I think we were in Germany and we saw some kind of late 90s live-action “Ninja Turtles” show, and Donatello was a chick, and at this point I was like I’ve lost most of my faith in everything.

EM: She had little turtle teets.

NP: “Breaking Bad.” We’re getting excited for “Breaking Bad.” “Game of Thrones” is a recent obsession. We’re all up to date on the “Walking Dead.” “Shameless” is a big one. “Shameless” is the one that we all watch on the bus together, as one. We got to the point where we all had to be there to press play, because somebody was going to get upset if they missed out.

JR: I’ve got the famous Reddit AMA question for you guys: Which would you rather fight: one horse-sized duck, or 100 duck-sized horses, why and how?

EM: I think the duck-sized horses because they’d just be so cute.

NP: They’re cuter, way less intimidating and there’s more of them, so if there’s an accident—

SW: I didn’t think about food!

KR: That’s a lot of dinner!

JR: So how are you going to kill it?

JR: Whatever you want it to be.

JR: You guys have a song on the new Iron Man soundtrack. How does it feel to be on a big movie soundtrack?

NP: We couldn’t believe it. I think, I remember when Spider-Man came out and I got that soundtrack.

EM: The one with Dashboard Confessional on it?

NP: And Chad Kroeger and Three Doors Down, and I was all psyched about that and I remember, you know the music video with Spider-Man flying through Chad Kroeger’s face. So it just reminded me of that. And it’s a pretty cool honor to be included, especially with that line-up. It’s kind of like a little chunk of our road family because we keep running into a lot of those bands, especially this summer we’re looking forward to running into a lot of those guys at festivals.

JR: So you guys get to be friendly with a lot of other bands on the road?

NP: Yeah, definitely, you definitely find that, when you’re on the road with somebody, they end up being just extensions of your family.

JR:  You guys toured with fun. earlier this year, right?

EM: We toured with fun.

NP: We were on the road with Young the Giant for a while, Fitz and the Tantrums.

KR: The Wikipedia page doesn’t come close to listing the entire list, we’ve been out with just a ton of bands.

EM: Family of the Year. L.A.’s very own Family of the Year. Really, really like those guys. When you’re a touring musician you have a unique set of experiences that not many people share. And I think there’s an easy camaraderie with people on the road, because you have to be friends, or else you just don’t have any friends because you’re in a new town tomorrow, or today, depending on what your schedule is like. Ours has been like two towns a day for the last four days.  So you definitely seek the friendship and companionship there.

JR: What has it been like over the past year or so, going from being sort of a cult band to slowly rising and being more and more known, being on soundtracks, “Anna Sun,” being really popular—how does it feel?

KR: It’s interesting because, you say something like “rising in popularity,” and it’s like we just don’t feel that.

EM: We don’t really get a chance to step back and realize what we’re doing. We’re just constantly, constantly working.

KR: Once in a while you’ll get somebody that’s like “what’s it like being famous?” and it’s like…I don’t know.

EM: I worry about paying rent. That’s what it’s like to be famous.

SW: People don’t really recognize us when we’re on the street so it’s not really—

SW: Nic got recognized as Eli.

NP: We had 24 hours at home and I went to stock up on tank tops, and walking out of the parking lot these guys pulled up and they were like “Eli! Eli? Walk the Moon right?” and I was like “…yeah hey!” [laughs] And I had just gotten my haircut to look like him so I think that’s part of it.

KR: That was your chance to like, give Eli a really bad name. Like throw something at them.

SW: Like strip and run around naked. “I’m on meth!”

JR: Okay, well thank you guys very much it was a great show—

KR: And on that note. [laughs]

EM: This is Walk the Moon signing off, trying to go to sleep.