Highlander
Home Features A View From the Top: Interview with carillonneur David Christensen 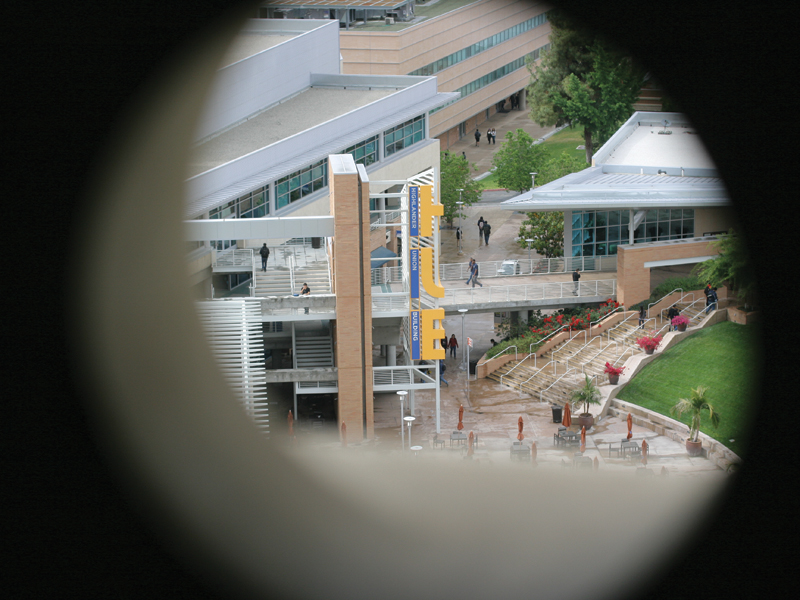 Hidden away in plain sight, sitting at the top of the Bell Tower, UC Riverside carillonneur David Christensen sometimes forgets that he is performing for students. “Sometimes I want to stop and play a different song but I have to remind myself that the entire campus can hear what I am playing,” said Christensen. But let’s back up a second. What exactly is a carillonneur? And what does he or she do?

The carillon is an organ-style instrument with wooden keys like a piano along and an entire set of pedals for his feet to play. Each key strikes one of 48 bells. The smallest bell weighs in at 48 pounds and the largest one, the bourdon centennial bell, weighs in at 5,091 pounds. UC Riverside is one of three UCs to be graced with these musical bells, and one of five total in the state of California.

You have heard the chimes that sound off at the start of every hour, but have you heard the songs? According to Christensen, many students just think it’s a recording, but Christensen sits six stories up playing everything from Bach to “Singin’ in the Rain.”

After graduating from the University of Redlands in the early 1970s, Christensen found himself at UCR studying music. That is where he met Lowell Smith, UCR’s first carillonneur, and began taking lessons. Smith left and Margo Holstead took over the reign for 10 years before Christensen got the job. He has been ringing the bells since 1987. Christensen plans on staying at least until the 50th anniversary of the Bell Tower in 2016.

“My favorite style of music to play is from the Baroque period, like Bach and George Handel. Newer pieces from Broadway musicals sound really great on the carillon but one of my favorite songs to play would have to be Clair de Lune,” said Christensen as we sat on couches 100 feet above the ground, directly underneath the bells. It was easy to forget where you were until you looked out the window and could see everything from the HUB and out to the orange groves on Martin Luther King Boulevard.  Many musicians strive to be a performer and have a need to feed off of an audience to really get satisfaction out of their music. But for most performances, Christensen never sees a single soul as he plays the carillon’s wooden keys.

“I’ve been told by a lot of people that they think [the carillon] is under computer control and in a way I guess that is a compliment because I haven’t been making mistakes,” said Christensen.  “I look at performing up here like being in a radio studio, you don’t see anyone around and it’s easy to forget that anyone is even listening because there is no immediate feedback.”

The 5 p.m. bells had just rung when Christensen sat down to play. Swiftly thumping each key as he sent vibrations throughout the entire campus, his love of craft was apparent. He looked like a mad scientist, his hands and feet moving frantically from one pedal to another. “I spent two to three hours a day practicing this instrument when I first learned it,” he said.

It’s more than just playing the instrument that keeps him here. It is the instrument itself. Christensen has a deep love for the tradition behind the carillon’s bells that were created by the French-based Paccard bell foundry that was established in 1796.

“What’s interesting to me is that with the advent of technology especially on a university campus with people making breakthrough research in all sorts of fields that here in the center of campus we have an instrument that is still being played the same way as it was in the 17th century. It’s like going back in time when I play up here,” said Christensen.

Though he is not always seen, Christensen and his instrument’s presence on the UCR campus are difficult to avoid. Whether you’re paying close attention to the melody in the chiming of the bells, or it serves as a pleasant background sound, the carillon makes up a sometimes subtle, but important part of UCR history.