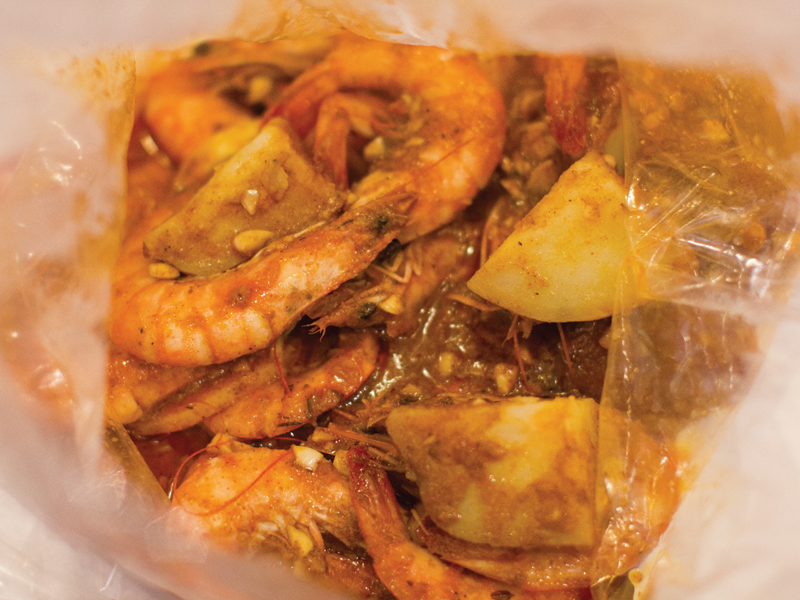 When someone has a dire hankering for seafood, UCR students and Riverside residents can find refuge in Rockstar Shrimp—located up Blaine Street at the University Shopping Center—to crush their craving. Offering a small but a satisfying menu, Rockstar Shrimp was nothing less than what its title suggested: rockstar-quality shrimp.

My friends and I walked in, not knowing what to expect. Dark colors, plasma screens and fist-pumping music gave us a club vibe before we even noticed the homemade beach decor cluttering the front counter. Still bobbing my head to the sound of Rihanna from above, the waitress greeted us at the door with a perky hello.

The menu was straight to the point. Customers have a choice of one pound of boiled mussels or crab for $10 or one pound of shrimp for $9. Once I chose the shellfish, the next task was to pick the sauces: “be gentle,” “kick me,” holy moly,” and “I wanna cry” were the options of sauces. To complete the order, customers are given eight sides to choose from, two of them being the steamed rice and their newest edition, fried Cajun shrimp. Customers can also find alternatives for a meal such as fish and chips.

Since it was our first trip to Rockstar Shrimp, we made sure we tried their signature dish: the boiled shrimp. We tried the spicier “Kick me” and “Holy moly” sauces. Our sides included Cajun fries ($3) and Cajun fried shrimp ($5) that the waitress had suggested. She continued to bring us extra accessories before we could chow down. She brought mounds of lemon wedges, cups of lemon pepper and salt, and traditional (and cheesy) lobster printed bibs. Once we rolled up our sleeves and tied our bibs, our waitress literally brought our food in a sand pail. “Enjoy your meal,” our waitress told us, “[and] good luck.” We wiped our drool and then we plowed into its depths.

The first shrimp I tried was boiled with the “Holy Moly” sauce. I chuckled before taking the first bite, thinking it wouldn’t be as spicy as the name suggests. But when I tried it, I felt like I getting smacked in the back of the throat. All I could think was, “Holy moly, they are not messing around.” Note to self: The meal is not recommended for chapped lips. The shrimps were boiled in their complete shell. Neat freaks, grab your latex gloves, because it was a messy ride to just make a shrimp edible.

After 10 minutes of fumbles, I had my way with the shrimp and enjoyed the richness of the shellfish and the unique Cajun sauce it absorbed during the cooking process. Chunks of garlic and waves of lemon hit me with every bite. A great complement to the shrimp was dipping it in lemon juice with the lemon pepper mixture the waitress previously brought out. De-shelling the shrimp was the biggest pain, but after dealing the first few, one can feel like a professional fisherman. Right after the first bite, I was hooked on the shrimp, although I frequently had to take a sip of my ice water to cool the burning sensation from the hot sauce.

The sides did not go unattended either. The Cajun fries are simple potato cuts with flavor enhanced by the Cajun spice. The fries are great for dunking into the sea of Cajun sauce. The best part of the meal had to be the fried Cajun shrimp. Since the entire shrimp was deep fried, the guest can even eat the eyeballs, too. Can you tell I like to play with my food? The batter was thin enough to give a light crisp, but substantial enough to really get the Cajun kick. The fried Cajun shrimp order has about 10 shrimps, which can be devoured in no time.

Even though the order seemed to be small for a hungry customer, halfway through the pound, I was searching for air. I was definitely satisfied with my visit to Rockstar Shrimp. Not only is it easy on the wallet but also satisfies the seafood craving. Riverside may not be on the shore side, but Rockstar Shrimp can put anyone on a Cajun beach.