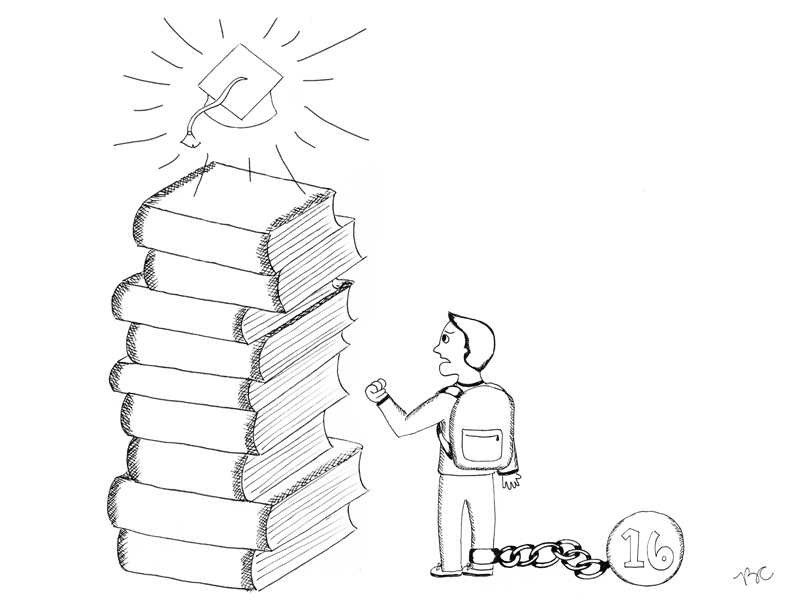 Now that the course offerings for fall have been posted online, the scramble for classes has begun. In the quarterly ritual of class selection, students weigh class times, breadth and major requirements, difficulty and more in the hope of completing the Tetris puzzle that is choosing classes. One requirement, though, overrides all else when selecting a course schedule: the dreaded 16-unit cap.

To ensure that all students were able to enroll in classes, a unit cap was first implemented in 2011. For a campus growing in size and in reputation, this was both a positive and necessary step forward. UCR would be able to expand its course offerings to more students, enabling more people to enroll and earn a degree. Implementing a unit cap was a logical decision in a time of state funding cuts and more desire than ever for a degree of higher education.

So UCR moved forward with the unit cap plan. The result is the system students now know: When courses first open for registration, students are only eligible to take 16 units’ worth of courses. The idea is good in theory, but in practice it has caused recurring nightmares for students as they struggle to enroll in the courses they need. Why? Because the problem is not the unit cap. The problem is the number of units UCR has selected for the cap.

Sixteen units were chosen because most courses are four units; this cap would ideally allow UCR students to enroll in a full load of four courses and graduate on time. But plenty of courses are five units, which upsets the delicate 16-unit balancing act students are forced to perform by pushing them one unit above the cap, forcing students to drop a course they are prepared and willing to take.

The only option left for students is to drop a class, often one that is necessary for their major. When second pass rolls around, students finally uncross their fingers and emerge from their nervous exhaustion to dejectedly discover that the class they’ve dropped is now completely full. And so is the waitlist.

What’s more, many of these classes are required for a large number of majors. Mandatory lower-division courses in economics, English, and political science force students to slow their track to graduation. Basic chemistry and biology courses pretend to be worth four units, until students realize that they must be taken concurrently with lab classes worth one unit. And although upper-division courses entail a greater workload and the increase in units is therefore somewhat justifiable, they cause just as much consternation when it comes to planning one’s course schedule. Sometimes, these required courses are offered only once a year, leaving students far behind in their pursuit of a degree.

UCR’s current system essentially limits students to three classes a quarter, except on rare occasions when all of their classes are miraculously four units. To graduate in four years, students need to average 15 units every quarter, or slightly less than four courses per quarter. But this feat is virtually impossible to accomplish with UCR’s current system. Instead, students’ college careers extend beyond the advertised four years.

To make matters worse, classes are posted around the same time midterms shift into high gear. Instead of students taking the time to focus on tests vital to their grade, they are instead preoccupied with the fear and worry that accompanies registration. Students are already anxious about midterms; the least UCR could do is alleviate some of that stress by eliminating the worry of obtaining the right classes.

This is a story heard all too often by students who have had to push back their plans for graduation because the unit cap has rendered them unable to register for four classes. The idea of students staying in college for five years was previously unheard of; now, it’s all too commonplace. It is true that some students choose to stay five years, and that is their prerogative. But students who seek to graduate in four years at a four-year university shouldn’t be prevented from doing so. Ironically, in an attempt to allow more students to graduate, UCR is inadvertently preventing students from doing so.

The poorly-implemented unit cap has created a class of students ready to move beyond college, but are unable to do so. With a stagnant class of students, UCR will drive down its four-year graduation rate, a metric important to students deciding which university among thousands to attend. UCR wants to be the crown jewel of the Inland Empire’s universities, but how will it do so if its students cannot graduate in four years?

However, it is clear that abolishing the unit cap, or raising it too much will have just as adverse consequences. Students with priority registration would be able to swipe courses from freshmen, leaving them with only part-time status and unable to receive financial aid. A delicate balance must be struck that creates the Goldilocks condition: not too high, and not too low, but just right.

A 17-unit cap meets these criteria. Raising the unit cap by just a single unit gives students the ability to register for a five-unit class that would have otherwise decimated their schedule. Students would be able to take four classes, as UCR recommends, without the fear of a necessary course slipping by. At the same time, the increase is not enough for students to enroll in five courses, taking away the courses needed by those lower on the registration totem pole.

Those against an increase have argued that some students enroll in more units than they intend on taking, instead waiting through the first two weeks of the quarter, only to drop the course and deny other students those seats. Increasing the unit cap may give these students more opportunities to take classes away from the students who need them. This is a legitimate concern, but it is not an insurmountable challenge. A potential solution could be to limit the number of times students are allowed to withdraw from a course, or make students decide whether or not to withdraw earlier. Either way, this is a solvable problem and should not hinder the implementation of a 17-unit cap.

Thankfully, students are already working to rectify this problem. Senator-elect Shadi Matar has been spearheading a campaign to increase to the unit cap, along with Senators Ashley Yee, Spencer Castrellon and Johnny Ta. “If every class at UCR was a four-unit class, a 16-unit cap would be just fine,” remarked Matar. This move is exactly what UCR students need to achieve their dreams of higher education.

Too many students have spent too many hours crafting the perfect schedule, only to find that a required course has been snatched up. Too many would-be graduates have had to wait to see their parents’ happy faces. For too many students, UCR has become a five-year university. UCR can make a dramatic change in its students lives. And all it has to do is raise the unit cap by one unit.