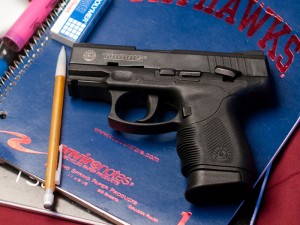 With the multiple recent shootings that have occurred around the United States, the controversial lack of restrictions on gun ownership needs to be addressed. The tragedy at Sandy Hook Elementary School in Newtown, Conn. begs the question: Should it be so easy to obtain a gun, even after travesties like Sandy Hook and Virginia Tech?

Despite an unfortunate January shooting at a Texas community college, in which three people were shot by a 22-year-old man, the Texas House of Representatives managed to pass this particular bill and send it to the state Senate.

President Obama is trying to take action in enforcing and enhancing the gun control laws throughout the United States. One of these changes is reforming the Health Insurance Portability and Accountability Act so states can share information regarding mental health issues among potential gun purchasers, strengthening the background check system.

Like many other states, Texas requires its citizens to have a clean criminal and mental health record, as well as pass a gun ownership course to obtain a permit to carry a concealed weapon. It was reported in 2011 that Texas had a firearm assault rate of 58.28 per 100,000 people, compared to California’s 45.39. According to the New York Times, states that implement fewer regulations on gun usage are also the states that have the highest death rates by guns. Texas is number 23 on that list; California is the 40th.

It is necessary to check one’s criminal and mental health history, as it is a risk factor for the horrid incidents of Sandy Hook and Columbine. However, a spotless record may not be enough to allow us all to sleep soundly at night. There can be just one person, who despite having a squeaky-clean background check, who may still have dangerous internal thoughts of committing mass murder.

Jack Levin, professor of criminology and sociology, says, “Many gunmen have a clean criminal history—they are just having a really bad day.” While committing mass murder because of a bad day may seem ridiculous, Levin is correct. A potential shooter may have a clean psychological and criminal record at the time of the gun purchase, only to go on a shooting rampage after he or she has passed the background check and bought a gun.

President Obama is correct to augment current gun laws, but this alone is not enough. Obama would essentially keep the process the same, except with stricter guidelines. Instead of simply purchasing a gun and walking away, extra steps should be added onto the process of obtaining a firearm.

Like numerous products that require a trial period, guns should also have the same requirement. Wisconsin and Connecticut, among other states, implement waiting periods before the gun owner can physically be in possession of his or her weapon. Such waiting periods should be the case for all 50 states and the District of Columbia. Those who successfully obtain a firearm after passing both the background check and the gun courses should be required to adhere to a certain trial or probation period to which the gun owner proves that his or her intentions of owning the weapon are not destructive. The trial period must be universal for all states, and if the agreements are broken, the consequences must be more severe.

These checks must be applied to those who wish to possess concealed weapons on college campuses in Texas. Though the gun carriers may feel safe and secure while carrying their weapon, those who do not own a gun may feel uneasy and frightened. Look back on the Virginia Tech shooting in 2007 and the horrible destruction caused by shooter Seung-Hui Cho. The very thought of a similar shooting can cause fear in students.

Those who want to protect both themselves and others are admirable. However, we all must think about the dangers of possessing any kind of weapon on a college campus. Gun purchases are not always sold with a background check. In fact, up to 40 percent of gun purchases are sold without a background check because they are purchased from private sellers or gun shows. Not only can someone with ill intentions obtain a gun from an innocent individual, but they can often purchase them without a license.

Imagine if the same bill were to be proposed in California. How would it affect UCR? Although student gun owners would be required to own a permit, that alone is not enough to keep students safe. The Riverside and the University of California Police Departments would have to be on an exhausting, never-ending high alert for any suspicious activity or potentially dangerous situations.

The frightening notion is this: If a student is permitted to possess a firearm, the fear of an incident immediately extends to the campus environment because the weapon is no longer relegated to a school in another state or country, but right next to you in a lecture hall. The campus cannot know the name of everyone who owns a firearm.

All law-abiding citizens have the right to bear arms. However, because mass murders are prevalent within schools and university campuses, guns should not be present at all. Therefore, the “campus carry” bill should not have been passed in Texas, as it creates fear within institutions of higher learning, instead of determination to learn. The “campus carry” bill does not protect Texas citizens and students from harm, but increases the potential for another shooting that could render the same devastating consequences as Newtown and Aurora.