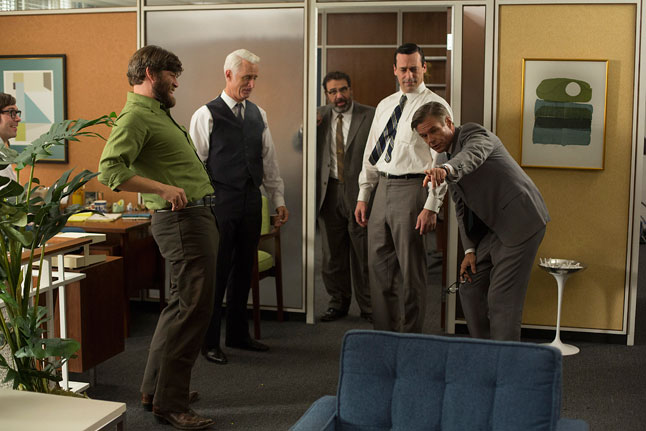 Twitter exploded this weekend with comments from “Mad Men” fans who complained about being more confused than usual about the activity taking place at SDPCGC (name still pending). In response to the confusion, I can only say that the episode was supposed to be hectic in order to make audiences feel just as confused about Don feels about himself.

“The Crash” opens with Ken Cosgrove (Aaron Staton) speeding down the street in an Impala with Chevy executives forcing him to push the limits of speed and risk. Next thing we know, Ken enters the office with a limp and tells the partners that Chevy has turned down their ideas and wants to see more. This sets the stage for an episode consisting of a downward spiral of emotional backlash and people trying to escape their dreaded loneliness.

Everything would have stayed fairly normal if it weren’t for Jim Cutler (Harry Hamlin) calling his doctor into the office. After his visit, I went ahead and assumed that injecting a speed serum into wealthy businessmen was popular during the 1960s. Since most people are drug induced for the majority of the episode, it came as no surprise that Matthew Weiner (creator) and Jason Grote inserted plenty of nonsensical, but meaningful dialogue. A drug-upped Don Draper, for instance, would administer inspiring speeches that, however uplifting they may have been, were really subtle undertones alluding to his hankering pursuit for answers about his troubled past.

As Don grows closer to certain repressed memories, audiences are shown various coercive Dick Whitman (Don’s real name) flashbacks along the way, one which includes the young Dick being nursed back to health by a kind hooker living in the brothel with him and his mother. The inclusion of these are necessary, but almost overplayed at times.

The brilliance of the episode lies within the directing of Michael Uppendahl. For those unfamiliar with the side effects of speed, it is said to increase the passage of time. Uppendahl makes this effect hold true with some clean jump cuts.

Before I go any further, I would like to note the unfortunate lack of Peter Campbell, Roger Sterling and Joan Harris. Ted was also missed for a very large portion of the hour, but this is due to the recent death of employee Frank Gleason. Ted had to attend the funeral, but it is nice to see him return by the end of the hour.

During the fast-paced episode, we get the pleasure of seeing a tap dancing Ken Cosgrove, who I really wish would get more screen time, and a long awaited kiss between Stan Rizzo and Peggy Olson. Then, there is Sylvia trying to put Don in his place.

The desire for closeness is a theme that is played out very well in “Mad Men” and especially this episode. No one can be sure why Don is so attached to Sylvia, but the longing seems to be cherished more than the actual relationship ever was. A chilling disconnect is still clearly apparent between the two. However, this does not stop Don from lurking outside of Sylvia’s apartment and smashing things in his office in frustration of his lost love––something Sylvia feared would happen early on.

Jon Hamm and Linda Cardellini are fantastic together, giving audiences a sense of awkwardness and frustration as a result of Don’s pleading and Sylvia’s attempts to rid herself from him.

Elisabeth Moss and Jay Ferguson are equally good here as they experience their own romance. Peggy insists on not kissing Stan on multiple occasions, but eventually gives in until the interaction halts for a final time. This leads to Stan giving a saddening line about his cousin being killed in action, a very intense moment of empathy on Peggy’s part, who gives a wonderful speech about the necessity to experience the feelings rather than to try and numb them. Although I take it Stan prefers the latter, since we see him getting it on with Frank Gleason’s daughter in his office toward the end of the episode.

Due to the sense of a distortion of time throughout the episode, along with the addition of the chilling “Grandma Ida” and the unexpect transformed Betty who has lost the weight she had for the past few seasons along with embodying her original hair color, “The Crash” emits a dream-like vibe.

In what seems to be this drug fantasy, Don is trapped by an obsession with digging into his subconscious. As Don flies through his trip (“It’s Saturday?” questions the shocked Director of Creative) he searches for the answer to advertising without realizing that he is really searching for something else, which is essentially a reason for why he is such a disturbed and detached man today.

Don continues to chip away until the final straw is pulled and a lost glimpse into his past is reached. We see Don sifting through shelves full of old artwork from past accounts. He finally stumbles onto an advertisement for soup that shows a mother feeding her son and reads, “Because you know what he needs.”

This discovery triggers a memory in which Don lies fully recovered in bed and a prostitute says some comforting words as she does her makeup in a nearby mirror. She slowly walks over and gets into bed with the young Dick Whitman. Don’s search for reasoning is hardly fully answered, but the sexual abuse that is soon experienced by Dick does explain Don’s destructive relationships with women and loved ones.

The scene is definitely heavy-handed, but very well done and also makes clear Don’s need for the maternal aspects of love. The molestation finally gives viewers one elucidation for why Don is so apprehensive toward all of his relationships.

On that note, it was interesting to watch Don and Frank’s daughter converse in the solitude of his office. Don, being high, doesn’t even remember inviting her into his work space. In spite of this, she approaches and says, “Does someone love me?” Don looks confused, but she simply states that that was the question Don thought of earlier after she asked him what he wanted answered. Don reveals some truth here with a stunned reaction, implying his surprise of Wendy’s ability to know this. Of course, Wendy Gleason remarks that it is everyone’s natural inquiry, but I do believe that the question of whether or not Don has true love within his life is on his mind much more than many other people.

Don searches his memory for moments of tenderness, but only finds despair. This comes as no surprise considering that he grew up during the Great Depression and things were difficult. Getting beaten by your mother and her wooden spoon was probably more frequent than expected. But I digress, and wonder if Don notices that the love between him and his children are fleeting while he grows increasingly disturbed about his past and his failed relationships.

In later scenes, audiences are introduced to an unnerving character referred to as “Grandma Ida.” Davenia McFadden is super as the seemingly polite and gentle home intruder who is caught red-handed by Don’s daughter, Sally (Kiernan Shipka). Don is busy at work and Megan is out on a casting call, so Sally is left alone to question Grandma Ida who insists that she raised Don. Shipka does great work as the skeptical daughter and delivers an important line casually enough to make it not seem overbearing for the episode, saying to her father after the incident that “I asked her everything I know and she had an answer for everything. Then I realized, I don’t know anything about you.”

Don Draper is a disturbed man. Fans know this, but we do not know how much of a scar it really has left on Don or will leave on his children. Don said to Peggy early on that “You’ll know when you see it and it’s going to crack this thing wide open.” Unbeknownst to him, he was talking about himself, and although he may have cracked one nut, there are plenty more left to be pried open.