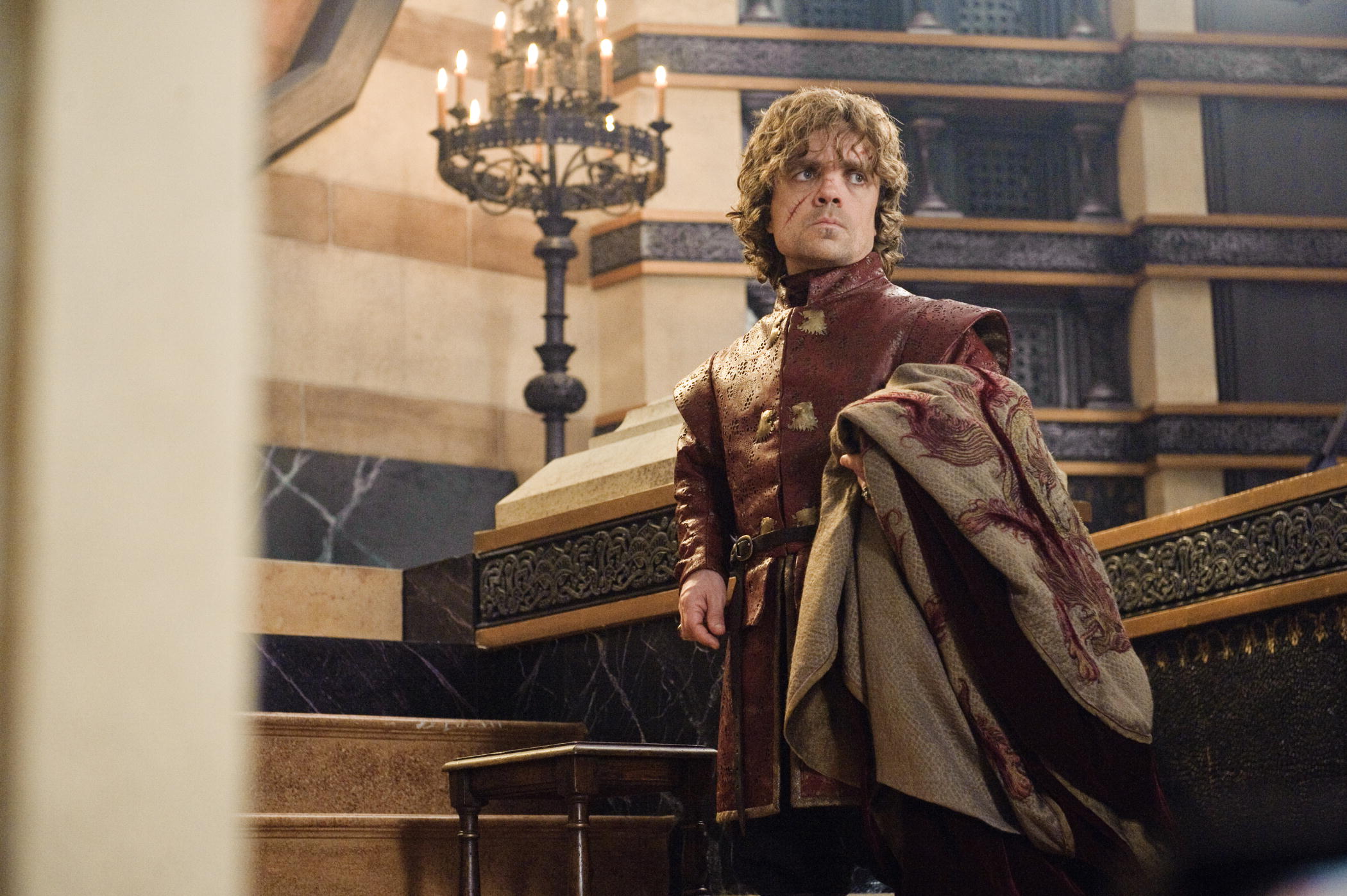 After last week’s lull, “Game of Thrones” bounces back full force without a single dull moment. At its core, “Second Sons” is still a character-driven episode, centering on interrelationships rather than battles or the bigger thematic picture, but it’s a strong episode that truly shows off the impeccable casting and the balanced chemistry between all the actors.

We open with Arya holding a rock over the Hound’s head. Though their interaction was short, Maise Williams and Rory McCann are perfect together. Williams meshes well with every actor in every scene and scenario she’s given, and McCann’s portrayal of a tortured and conflicted man is spot on. There is humanity and goodness underneath his rough façade, and for just a split second, Arya almost looks grateful that he’s taking her back to her family.

After three seasons of snow, iron and gore, we finally arrive at a different kind of battleground: a royal wedding. Far from being a happy affair, the wedding is a thoroughly entertaining display of the ugliness that plagues two of the most powerful families in Westeros: the Lannisters and Tyrells. No stranger to Joffrey’s cruelty, the writers kicked it up a few notches this week when the king purposely insults his uncle’s height during the ceremony and then threatens to rape poor Sansa later during the night because, according to him, it doesn’t matter which Lannister impregnates her.

I’ve been yearning for more interaction between Margaery and Cersei, and I got my wish this week when the younger queen-to-be gets knocked down a pedestal when Cersei threatens, “If you ever call me sister again, I’ll have you strangled in your sleep.” This comes right on the tails of Cersei sharing the meaning behind her family song, “Rains of Castamere,” and what happened to the last family that tried to usurp the Lannisters (“slaughtered”). As resentful and fouled-tempered as ever, Cersei also rebuffs her gay fiancé’s attempt at conversation.

Lady Olenna, on the other hand, is enjoying the festivities to a greater extent. In one of my favorite scenes of the episode, she comically lays down the muddled genealogy of her expanding family. The kicker was that Margaery’s brother will also be her father-in-law. Geez. The Queen of Thorns realizes her family has to play the cold hand they’ve been dealt, but at least she’s not afraid to tell it like it is. If Margaery is as clever as she has shown herself to be, she’ll stay out of Cersei’s hair and circumvent her venomous future sister-in-law/mother-in-law.

The only mercy shown throughout the wedding is by Tyrion, who gently and drunkenly tells Sansa he will not share her bed until she wants him to. This is a great relief on Sansa’s part, and also presents some semblance of forgiveness from Shae when she discovers clean sheets the next morning. She made it clear last episode that she can’t be bought with gold, but perhaps loyalty will win her over again.

Peter Dinklage is finally given some juicy material to work his magic with this week, and his portrayal of an insanely drunk and unhappy husband hit me right in the feels. Having known humiliation all his life, the wedding is the icing on the cake as all the nobility of Westeros shows up to laugh at his joke of a marriage. He even makes self-deprecating jokes about his manhood to avoid the wrath of the king, a move uncommon for the imp as just a season ago he was seen slapping Joffrey across the face. This proves how far Tyrion has fallen into his own pit of despair and helplessness. I always trust Tyrion to make the best of his circumstances, and this is his chance to show that he’s still got the flair and intelligence to prove himself better than his kin.

“Second Sons” is a fitting name for the episode. Not only are we introduced to the actual Second Sons, we also get glimpses of the overshadowed and overlooked: Tyrion, after Jamie; Stannis, second to Robert; Sandor, dominated by Gregor and Sam, disinherited and sent to Night’s Watch.

The only glimpse in the North we see is through Sam and Gilly. Sam finally steps up to the challenge and finds courage deep within himself to protect Gilly and her infant boy against a White Walker. When his steel sword proves useless, Sam, in desperation, stabs the Other with the “treasure” he found a few episodes back. The blade burns and melts away the creature instantaneously. This is a vital development for “Game of Thrones” as a whole because the White Walkers will grow stronger and pose a greater threat as winter sweeps through the Seven Kingdoms in upcoming seasons.

Back in Dragonstone, Melisandre returns to Stannis with Gendry, and informs her king that the “lamb” has power in his blood. In an interesting conversation, Stannis seeks out Davos, meaning to free his most devoted subject when the Onion Knight knew fully well that Stannis wanted to use Davos as a voice of reason against sacrificing Gendry. However, Stannis is wrapped around Melisandre’s finger, and he takes Davos to witness as Melisandre uses Gendry’s blood to symbolically rid him of the three usurpers: Robb Stark, Balon Grejoy and Joffrey Baratheon. With the different route that the writers have taken with Melisandre, it seems as though Gendry won’t be meeting a grisly end. As a matter of fact, the Red Woman appears to be using the blacksmith to father more of her creepy shadow babies.

All the way outside of Yunkai, Daenerys is introduced to the Second Sons, a company of mercenaries hired by the Yunkish to go against her Unsullied. She meets with the three leaders in order to buy them over with promises of riches and titles, but Mero, the Titan’s Bastard, merely insults Dany. He calls her a whore and lists the debaucheries he plans to commit on her body when she is defeated. It is a testament to how far the Mother of Dragons has come as a ruler that she doesn’t flinch at the insults, but takes them in stride, offering respect and veiled threats to her guests. She has become thick-skinned and calculating––attributes that add to her armor.

The youngest of the three leaders, Daario Naharis (English actor/rapper Ed Skrein), a rather poetic warrior who fights for beauty and pleasure, takes an immediate interest in the khaleesi. This leads him to killing his other two comrades and swearing the Second Sons to her service. Luck is heavy in Dany’s favor, first scoring the Unsullied and then two thousand more Sons to her army in a matter of days while escaping an assassination attempt, simply because her would-be killer is enamored with her beauty. It all seems too easy, honestly, and I hope some challenge presents itself soon as Daenerys evidently learns well from hardships and struggle. It is dangerous if she thinks her path will be smooth sailing from here. She has amassed an army, but has not won any battles, and her true skills will be put to the test when the time comes for her to take Yunkai.

What makes “Second Sons” a standout episode is that it chose to focus on three main arcs: the wedding in King’s Landing, Dany near Yunkai and Stannis at Dragonstone. There was much focus and plot development in all three scenarios, and the rest of the hour is peppered with short but meaningful scenes of Arya and the Hound, as well as using Sam as a medium to reveal the only weapon that can kill the Others. With only two more episodes left, “Second Sons” was the perfect way to build up the climax of a very eventful third season.