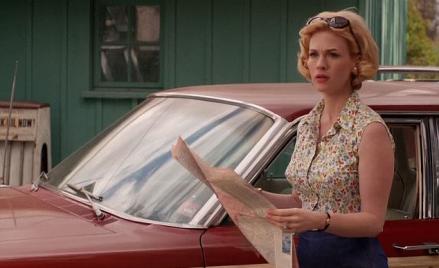 The most recent episode of “Mad Men” opens up with a debate about margarine, providing a normal start to the episode contrary to the chaotic mess that was aired last week. The qualities about the butter substitute mentioned early on set up a metaphorical base for the characters this week.

“The Better Half” is all about the employees of the still-nameless ad company deciding what and who is better for them. For Joan Harris, Roger Sterling surely is not her better half. Roger, desperately wanting to be a part of his child’s life, purchases toys for Joan’s son Kevin. However, Joan refuses his offer to embody a father figure role, knowing that her ex-husband Greg is a better role model. Roger is a humorous man with good intentions, but his parenting skills have to surpass a subpar level.

Don notes during a meeting that butter tastes better, but margarine is more durable; hence the reason margarine has become more popular. The aspect of reliability is also why Joan prefers to spend time with the peppy Bob Benson, whose role has gained more time on screen, rather than Roger Sterling. The lack of reliability is also why Betty needed to leave Don a few seasons back.

When we see Betty, she is standing alone puffing on a cigarette at a fundraiser while her husband, Henry, steps out to talk on the phone. While he steps away, just like Don used to do so often, Betty is hit on by Stu, who says he would like to be with her all night long. When Henry finds out, he is not pleased — but he would be less pleased to know of the affair Don and Betty reignite later on.

Don leaves work for a couple of days in order to spend time with his son, Bobby, at a summer getaway spot where his ex-wife, Betty, also joins. Betty has become easier to watch now that she has become a much more confident and self-assured human being. For instance, after Don and Betty make love, they engage in some eye-opening conversation. Their post-coital discussion, in which Don says he misses his ex-wife, is brought to a realistic level when Betty mentions that if they started up their relationship again, Don would quickly dispose of her once he gets bored. She also says that Don’s wife Megan is in an unfortunate position because “she doesn’t know that loving you is the worst way to get to you,” which catches Don off-guard.

Betty was much more likeable in this episode than she has been in a long while. Usually, she was easy to throw under the bus as the reason why parts of the episode were flawed, but she proved her worth now that she has evolved into a brutally honest woman who knows a one-night stand when she sees it.

Henry fears losing Betty, but there is only a slim chance that will ever happen. Henry, like margarine (a comparison only made due to the content of the episode), is a lot more reliable than Don ever will be.

Many of the characters are worried about their relationships, but Pete Campbell is currently worried about his position at the company. It is clear from the moment we see Pete that his opinion is not valued, even after siding with Don, who believes the advertisements for margarine should be focused on the taste rather than the price. Noticing that his role has become undervalued, Pete meets with Duck Phillips, a former self-destructive-ad-agency-employee turned-headhunter who says that Pete has no place in management.

I generally like Pete Campbell, even during his more wretched moments, because there is always a sympathetic side to him. This week he is much calmer because of his worry about his place at the company. After confiding in Joan, it is apparent that she may be the only one who sees Pete as a valuable part of SCDPCGC (the stand-in name for the company). I hope he stays, even though it seems less likely as the season progresses.

Peggy is also walking on eggshells at the company, but for very different reasons. Pete sides with Don about the direction that should be taken on the margarine campaign, but Peggy does not take a side since she believes that choosing a side means choosing between Don and Ted. This sets up a discouraging trend for the loveable and typically confident Peggy Olson.

Peggy, torn between two bosses, tries to play both sides. At one point, the underappreciated employee tells Don that Ted puts more emphasis on the idea for a campaign as a whole rather than his idea alone. Don rebuts by saying that Ted just doesn’t know her. Peggy has a hard time believing this, especially since there is romantic tension between her and Ted, who recently confessed his love for her.

Unfortunately for Peggy, she hardly has time to notice that Ted is very similar to Don. For Peggy, Don is not as reliable or durable as Ted; she only notices Don’s monkey business while paying special attention to Ted at work. By the end of the episode, Peggy comes to a startling conclusion following an accident involving a makeshift harpoon being submerged into her boyfriend’s stomach. Needless to say, Peggy is now single and brings this up to Ted, whose response demonstrates that he appreciates Peggy only as a co-worker. This hurts Peggy because it is then she realizes both Don and Ted can prance into the office the next day while acting like there was no dramatic significance any day before.

Peggy now has no better half, and I wonder if any “Mad Men” character will actually ever find one. For now, the members of the still-nameless company will remain to juggle what they have while ignoring other’s perceptions of them.