Highlander
Home Opinions Is there a double standard on birth control? 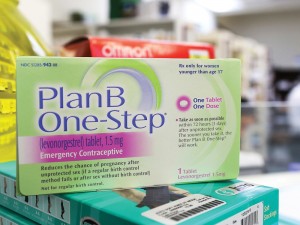 With the alarming rates of teenage pregnancy in the United States, contraceptives should always be readily available for girls and boys. Unfortunately, unlimited Plan B pill accessibility is not always accepted. Plan B and condoms have the same purpose: preventing sperm from meeting with an egg to create a zygote. But President Obama believes there should be restrictions on young women from purchasing Plan B because of its “adverse side effect[s].” When is the last time this claim was made regarding condom purchases?

Anybody can purchase condoms at any age, but girls cannot freely buy Plan B until age 17. The double standard might be because Plan B is a hormonal contraceptive as opposed to condoms, which are barrier contraceptives. But according to Plan One Step, as long as Plan B is taken correctly, the possible side effects are similar to taking regular birth control pills. Condoms have the side effect of a latex allergy that could result in hives, swelling, dizziness, or lightheadedness. Levonorgestrel, the hormone in both Plan B and birth control pills, only has the side effects of nausea, lower abdominal pains, and fatigue. Plan B is not much different from a condom.

Obama’s statement concluding Plan B’s negative side effects does not quite match up with physician Margaret Hamburg’s knowledge of the morning-after pill. Hamburg states, “There is adequate and reasonable, well-supported and science-based evidence that Plan B One-Step is safe and effective and should be approved for nonprescription use for all females of child-bearing potential.”

The differing gender roles are the deeper issue regarding buying birth control. Requiring young women to have a prescription for an emergency contraceptive that has few and rare side effects does not allow women the privacy and freedom she needs during an emergency or for precautionary measures. The double standard of birth control allows men to be relatively private about their sex lives, but does not grant women the same privacy. A woman’s sexual freedom has been suppressed by the patriarchal society we all currently live in, leading to lack of privacy when related to a woman’s right to express her sexuality on her own terms.

There is a stigma surrounding Plan B. A woman’s sexuality has been stereotyped to have “little to no sexual appetite.” Since the time of the Victorian period, women had the responsibility of pushing the opposite sex away. It wasn’t until recently that studies have shown that women too had sexual desires. This origin of a woman’s “sexual purity” has created the myth that women who want contraception are “foolish and promiscuous.”

Men, on the other hand, are judged differently on sexual encounters. According to Psychology Today, promiscuity is “almost always used when speaking about a woman.” The more women a man has had sex with, the more praise he receives. However, when a woman has the same number of partners as her male counterpart, she is labeled a “slut.”

This double standard on birth control is because of deep-rooted social stereotypes about men and women. A woman buying Plan B is already thought of as promiscuous and irresponsible when there are other reasons for buying the pill. A woman under the age of 17 who has been raped has a legitimate reason to purchase Plan B. On the other hand, when a man buys all the condoms he can afford, it is more accepted than a woman wanting to purchase a contraceptive.

Women who take charge of their own bodies by buying Plan B are not viewed in the same way as men. Granting privacy to women of all child-bearing ages to buy the morning-after pill will give women of all ages the same privacy men get when they purchase birth control.

Men buying condoms is seen as perfectly natural, but women buying Plan B is judged by our society as taboo. In order to stop the stigma and shame of women about sex and birth control, we must all look at human beings as a whole. Those who wish to have safe sex using whichever method of contraception should be seen as a responsible choice and action, regardless of gender or sex. Birth control is not a sign of a man’s masculinity or of a woman’s promiscuity; it is only a way of taking control of one’s body while trying to bring unplanned teenage pregnancy and sexually transmitted infection rates to a halt.