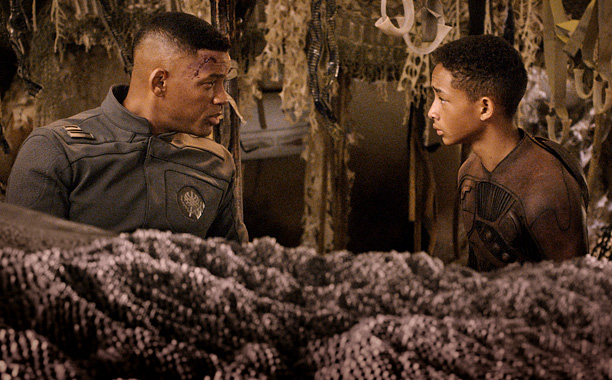 The Fresh Prince crash lands on Earth and sends the Karate Kid to save both their skins. In many ways, that would have made a more engaging story than what audiences saw in “After Earth,” which comes across as a heavy-handed father-son narrative between Will and Jaden Smith. Most of the dialogue is so on-the-nose it hurts, the special effects are surprisingly low-tech for a $130 million production budget and the closing scene completely invalidates the film’s prior 100 minutes. “After Earth” is a decent popcorn-popping DVR flick, but it’s nothing to write home about — particularly for (surprise!) director M. Night Shyamalan. I hate to perpetuate the negative connotations associated with Shyamalan’s name, but really, M., what were you thinking?

Riding on the coattails of April’s post-apocalyptic science fiction epic, “Oblivion,” Shyamalan’s “After Earth” presents an interesting hook. On the planet Nova Prime in a dystopian future, the Rangers are an international fighting force with Cypher Raige (Will Smith) as their enigmatic leader. In order to bond with his son, Kitai (Jaden Smith), Cypher invites him along on routine military business — until their ship crashes on the now-uninhabitable Earth. With both his legs broken and their only homing beacon located 100 kilometers away, Cypher sends Kitai to locate the beacon and call for help, all while evading Earth’s human-killing environment and fauna.

The story is there, but the execution is lacking. Settled in the ruined remains of his ship, Cypher spends most of the movie directing his son toward the beacon via super-snazzy communication technology on Kitai’s smart suit/sci-fi spandex. The resulting cuts between Will’s stoicism and Jaden’s freak-outs feel less like a feature film and more like a videogame; the only purpose of Will’s scenes is to either showcase a series of heavy-handed flashbacks or to provide Kitai with survival tips. Part of Will Smith’s appeal is his charm and screen presence, but his emotionless facade throughout the film thrusts the driving force behind “After Earth” onto Jaden’s young shoulders. And while I’m sure Jaden is a swell guy, his performance was too one-note to carry the film. He was supposed to serve as the audience’s sole focus when we weren’t watching Will’s backseat acting, but instead flipped between infrequent action stunts and lots of hiking/running/yelling at things.

Unfortunately, it was difficult to understand those yells because all the actors spoke in a strangely stilted, somewhat Southern accent. I can only assume the accent was supposed to suggest an evolved form of English, but its usage was so infrequent that it simply came across as an amateurish attempt to create futuristic intrigue. On that note, while several of the film’s science fiction elements were absolutely fascinating (Kitai’s flying suit and Swiss Army knife cutlass come to mind), the CGI was too unnatural to realistically suspend my disbelief. For instance, the monkeys that Kitai pisses off never seemed like a real threat because they didn’t look like they were part of the otherwise breathtaking landscape; they seemed less like evolved human-killers and more like characters from the early, and comparably low-tech, 2000s.

Of course, this film isn’t really about science fiction. It’s about Kitai’s relationship with his father and his coming of age — themes which come to a climactic head during the final battle sequence. As Kitai ascends a freaking volcano to set off the homing beacon, he must battle an Ursa. Part of the crashed ship’s cargo, the Ursa is a blind alien baddie that hunts by detecting fear. The last 10 minutes are some of the most exciting of the entire film, showcasing Kitai finally overcoming his fears, understanding his father’s teachings and showing off that crazy-cool cutlass. But by this point, even diehard Shyamalan fans (are you out there?) will have lost interest in “After Earth,” which would have been salvageable, save for the final joke before the closing credits.

Without giving the entire plot away, I’ll just say that Kitai’s comment made the entire film feel like an extended set-up to a lackluster and predictable punchline. The final one-two punch was seeing the end credits begin with Shyamalan’s name centered on screen, serving as the final twist in the wound that is “After Earth.”