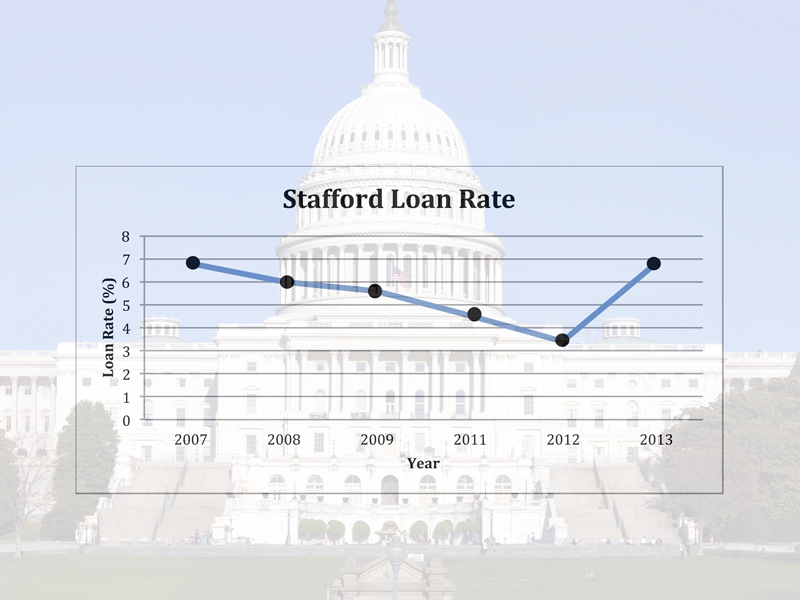 Update: Democratic leaders are hoping to vote on a bill as soon as July 10 to extend the 3.4% rates for another year.

College students across the country are anxiously awaiting action from Congress to prevent a student loan interest rate hike, effective July 1, 2013. If Congress does not act in time, rates on federally subsidized Stafford loans will double from 3.4 percent to 6.8 percent, according to the U.S. Department of Education.

The government-subsidized interest rate was historically 6.8 percent until Senator Ted Kennedy (D-Mass.) and Representative George Miller (D-Calif.) put together the College Cost Reduction and Access Act back in 2007. The policy gradually dwindled down the rate to the current 3.4 percent over the course of five years.

The deadline for reverting the interest rate back to the original percentage was July 1, 2012. However, when the deadline hit last year, President Barack Obama, Democrats and Republicans wanted to avoid the rebound, but couldn’t compromise on an agenda. Congress thus passed a temporary stopgap measure to extend the deadline for a year.

Now that the deadline is again rounding up, the prospect of doubling the interest loan rate is still unpopular among Democrats and Republicans. However, both parties are still unable to come to terms with a compromising agenda for adjusting the rates.

In light of a continuously shrinking job market, students nationwide face over $1 trillion in student loan debt atop lessened state contribution to higher education. Currently, about 7 million undergraduate students are beneficiaries of the Stafford loans.

According to the Institute of Access and Success, last year’s college seniors graduated owing an average of about $27,000 in student loans. The potential interest rate hike would translate into about $4,000 more additional debt for postgraduates.

For sophomore bioengineering major Alan Lin, who takes out a high amount of Stafford loans, the rate hike would be dream-crushing.

“The rate spike would mean that I would have to indefinitely postpone certain future plans after graduation such as going to graduate school, starting my personal business, or starting a family,” he said. “Instead of fulfilling the meaningful ambitions of my life, I would need to directly plunge into a full-time job to start paying off those debts. It’s disheartening to just think about it.”

Congressman Tom Reed, Republican of New York is currently leading a bipartisan letter with more than 50 congressional members to press the Senate to act immediately to keep interest rates below 6.8 percent.