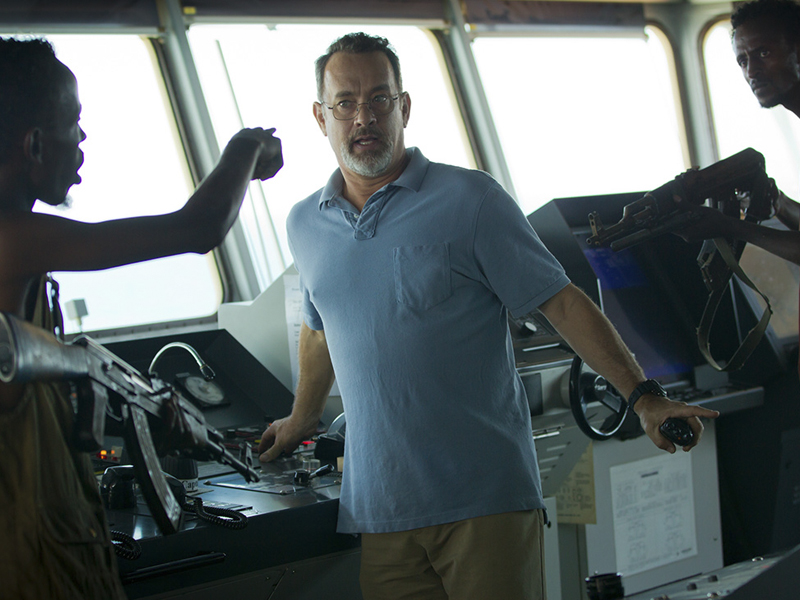 When Tom Hanks is billed as a lead for an emotionally challenging film, it has generally been a recipe for success in the past two decades. When he was cast as Captain Richard Phillips in “Captain Phillips,” moviegoers couldn’t wait to break out the tissue box for another ride. Sadly, Hanks’ new project as the heroic captain falls flat due to a lack of pace and yawn-inducing visuals, which fail to do a fantastic story and decent acting any justice.

The plot moves slowly, especially in the introductory scenes, as Captain Philips’ job as the leader of a crew and cargo ship is shown in great detail. Eventually, the film moves to the meat of the story, as Philips and his ship are boarded by Somali pirates, led by their very own “captain,” Muse (Barkhad Abdi). Staying true to incredible modern-day events, Richard Phillips is eventually taken by the pirates and held for ransom. Here, the film transitions away from earning its merits purely on the real life story of Phillips. It becomes a challenging ride for viewers who experience not only the inside of a pirated vessel, but two sides of a psychological battle between Phillips and Muse to get what they desire. It’s a truly well written script and excellent plot that embraces Philips’ heroism and humanizes the largely demonized Somali pirates.

Unfortunately, the film does a mediocre job of fully engaging the viewer beyond the writing and plot. It moves incredibly slowly — far too slowly for the viewer to feel immersed in a deadly situation. The first portion of the film rightly progresses at a more natural and quiet tempo, because it really is just a depiction of daily life for Phillips. However, the nature of Captain Phillips attempting to survive his capture by pirates is innately heroic — an experience much more lively and terrifying than daily living — but the movie never dares to quicken its tempo enough for the viewer to feel like they don’t know what’s going to happen. I understand that the directors were trying to stop short of making an action movie, but the film moves from careful execution to a plodding pace that shallows the cerebral purpose of the movie. The plot is quickly available on our smart phones and laptops, so by not having fast-paced action, the scenes just become monotonous and familiar instead of unpredictable and exciting.

A movie based on a ship traveling across the African coast being boarded by Somali pirates, with scenes that play out in a heated engine room and a steaming lifeboat, is practically begging for gritty visuals that teem with disgusting sweat and grime. These types of visuals — that make viewers pull at their collars and cover their noses — make the audience feel like they’re present, outside of the real world and immersed in the magic of film, but “Captain Phillips” doesn’t present anything remotely grimy, leaving out even the rust on the ship. The viewer feels just as muted as the exceedingly gray and white color tones of the ship, and just plain bored with the lack of shadow or depth in a lifeboat that doesn’t translate the deadly nature of the situation.

Ultimately, this film is superbly written, with brilliant conversation and an angle on the story that makes the viewer at least examine the lives of the pirates who have been largely misrepresented. However, the technical aspects of this movie fail to mirror the immersive properties of the plot, and so the final product is merely mediocre. “Captain Phillips” is unimpressive, unfortunately, and amongst a series of blockbusters, is probably not worth seeing.