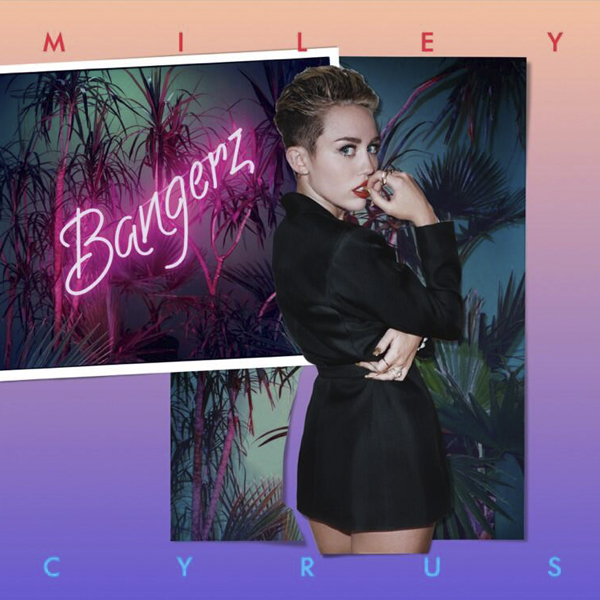 It’s impossible to have heard nothing about Miley Cyrus lately, whether it’s regarding her half-naked routine at the VMAs or admitting that her songs are about drug use. Especially after several performances of her single “We Can’t Stop” this summer, most of the attention she’s been getting has been on her behavior, not her music.

“Bangerz” is Cyrus’ fourth album and a drastic departure from her earlier recordings, featuring a mix of hip-hop, pop, rap and a variety of other artists — which makes it seem like the songs do not wholly belong to Cyrus. Like most 20-year-olds, Miley is growing up, finding herself and attempting to portray this in her music, but her vulgar language and attention-seeking lyrics don’t impress anyone or help her career as an artist.

Her first single, “We Can’t Stop,” is a feel-good party anthem with a pounding dance beat. Though the chorus is fun and catchy, the other lyrics in the song seem like they’re trying too hard to sell the party life image, such as “Bet somebody here might get some now,” and “And everyone in line in the bathroom / Trying to get a line in the bathroom.” On that note, Miley’s infatuation with partying, sex and drugs is evident on almost all of her songs. “#GETITRIGHT” is incredibly lustful as Cyrus sings, “What you want all day / Just as long as it’s you and I together.” She continues, “I been laying in this bed all night long,” which makes her seem completely weak and powerless in her relationship.

“SMS (Bangerz)” features Britney Spears and has Cyrus in the background almost the whole time saying “bangerz.” She finishes the track by saying “fuckin’ bangerz,” which was unneeded and annoying. “Love Money Party,” featuring Big Sean, opens with Cyrus sounding more like she’s mumbling than singing. The song succeeds as part of the house music genre, but is not really catchy or repeatable. “Do My Thang” has potential in the beginning of the song with a good intro and rhythms, but once Miley starts to rap and cuss profusely, the song goes downhill because it feels too forced and unnatural.

Her second single, “Wrecking Ball,” showcases Miley’s real talent and singing capacities. It’s definitely one of the best songs on the album; not only does she sing with passion, but her lyrics are insightful regarding the ending of her relationship — themes also explored through bursts of emotions in “Drive” and “Someone Else.” Cyrus’ view on love is slightly immature because of her emphasis on the sexual gratification of others, and using “the movies” as examples of true love –– but she does show greater depth in these tracks. She constantly refers to more significant things like marriage or her feelings of heartbreak, as opposed to her hip-hop songs about partying.

With so many different themes and genres going on “Bangerz,” it’s kind of hard to really see where Cyrus is as a music artist or where she’s going. Many songs show great potential and passion, but as a whole the album seems a little lost. As an artist, Cyrus might not be as lost, but she is definitely evolving.