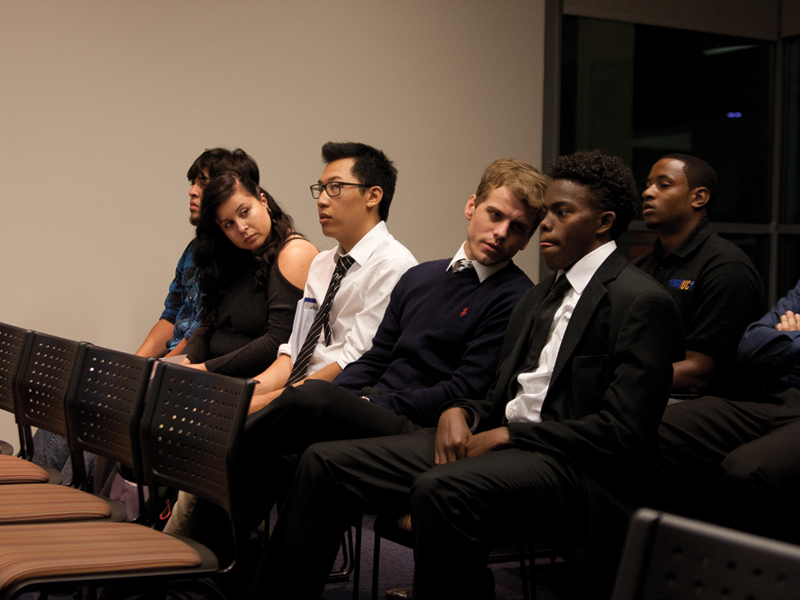 On Oct. 14, ASUCR senators voted to delay the approval of the Judicial Branch by a simple majority of 8-4-2 due to limited knowledge about each justice. The senators considered going into closed session to discuss the selection of judicial branch members, but were restrained by an ASUCR bylaw requiring 24-hours’ notice to hold a closed session.

Senator reports also revolved around the possible retitling of Chicano Student Programs (CSP) and lowering the language requirement for students in the College of Humanities, Arts and Social Sciences (CHASS). Lastly, the senate was met with an emotional public forum period through second-year biochemistry major Kushal Sonawala, who felt disadvantaged from obtaining the college experience as a commuter student.

“Senators Abraham Galvan and Nafi Karim … spoke to some people at Costo Hall and the External Affairs about retitling the Chicano Student Programs. I think the central complaint is that its name has a non-inclusivity … that is of non-Spanish descent, even though in practice it is,” Senator Michael Ervin reported.

Chicano is the demonym used for people of Mexican descent, while Latino is more commonly accepted to represent people of Latin American descent.

Chicano Student Programs (CSP) was founded in 1972, and was moved to Costo Hall 145 when construction on the HUB was completed in 2007. CSP provides students a number of resources to fulfill its mission to “develop a positive, constructive environment for Chicano/Latino students, while providing support services and facilitating programs designed to educate the general university population about the Chicano/Latino community.”

Senator Shadi Matar delivered his report with a yearlong goal of lowering the language requirement from four quarters to three quarters for CHASS students.

“It’s a huge goal,” said Matar. “The reason behind it is because it doesn’t seem practical to take four quarters of a language when you have three throughout the years and they expect you to take summer if they want you to take it your last year.”

Matar noted that he had met with the Distinguished Chair and Professor of the Department of Hispanic Studies David Herzberger to discuss the language requirement. When President Sai Patadia asked, “Did he say exactly why there was a four quarter requirement?” Matar responded that, “He’d rather see an increase in the amount of language classes you have to take from four classes to eight classes … he’s not willing to budge on that.” Senator Sandy Saly later added that UC Riverside is the only campus systemwide that has a four-quarter language requirement.

Turning to the public forum period, student Kushal Sonawala expressed his grievances about the commuter experience at UCR, during which he said, “I personally believe that the UCR student organizations promote an atmosphere of hostility and antagonism to commuter students.” He said that he feels discriminated against as a commuter student, who uses the carpool and vanpool services as alternative transportation services, ordained by the university.

President Patadia felt empathetic to the case as a commuter student himself and said, “My advice to you is … a lot of it is about getting out there and getting involved with the UCR campus (and the community). With that being said, I know your struggles and I know as a commuter you feel out of the loop.”

“I feel like I don’t even have a say about what’s going on. I’m just upset that I’m still commuting,” Sonawala exclaimed. As a result, he is meeting with a student life advisor to create a commuter club on campus.

Senator Galvan described this situation as a campus climate issue that has been continuously addressed by past senators on a multi-year basis. “This is a problem that no one on the senate wants to see happening, but I do want you to be more patient about this issue because it’s not easy to tackle.”

Later on in the meeting, senatorial decisions were further prolonged due to discussions over the Judicial Branch. Serving his second term and first appointment as Chief Justice of the Judicial Branch, Davion Rowles reviewed and selected five out of eight possible students applying for the Judicial Branch. Requiring senate confirmation, the candidates lined up in front of ASUCR and awaited a vote.

Instead of confirming the justices, the senate voted to take a five-minute recess — by a 10-2-2 vote — at 8:07 p.m. ASUCR Executive Director Laurie Sinclair cautioned against the discussion of issues of human resources and personnel matters. “I mean, I encourage you not to discuss anything … to avoid closed session,” she said.

After returning from the recess, Senator Niela Darmani expressed her concerns about the Judicial Branch. “My concern is, before we ratify this, I would like to get to know the judicial branch a little bit more … so we know what they’re signing up for and they know what they’re signing up for,” said Darmani. Adding on to the conversation, Chair of the Legislative Review Committee Aaron Johnson requested a cover letter and resume from the justices.

According to Rowles, “I asked … each of them, why they wanted to be a justice. Each of them had an hour interview with me.” During the interview process, judicial candidates were also asked about their outside commitments and scenario questions.

“Since you are appointed, are all of the justices aware that if you do get ratified as a justice, you cannot run in the elections this year?” Elections Director Chris Sanchez asked of the Judicial Branch. Due to the renewed appointments of justices with one remaining term and newly-selected justices with two-year terms, Sanchez desired to make clear the judicial restriction.

Darmani also added that the overarching concerns involved the justices’ possible lack of knowledge about the electoral proceedings. She continued to delve into the appeals process for justices, which led Johnson to explain, “While we do not have the power to amend or edit the Judicial Branch bylaws … the check that we do have on the Judicial Branch and that is that: ‘Any member of ASUCR Judicial Branch can be removed from office for malfeasance or dereliction of duty.’”

Senator Sean Famian interjected and expressed concerns that the justice nominations were “too fast,” while Matar noted that the candidates continued to make an appearance during the senate meeting and hoped for a “quick process” in the future. The senate decided to table the justices’ nominations by a vote of 8-2-4 and required the Judicial Branch to fill out a special report for the upcoming senate meeting, where their nominations will be hashed out.