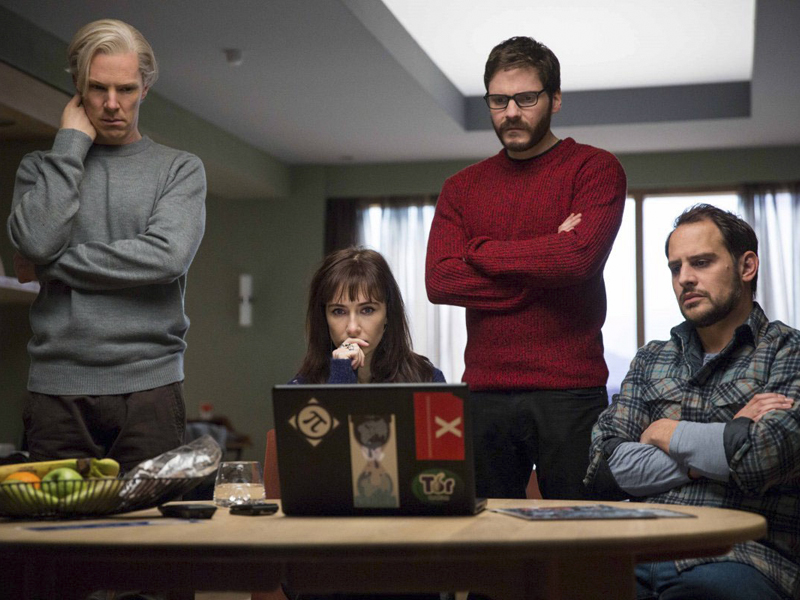 “The Fifth Estate” is not a masterful display of cinematographic execution, nor is it a nail-biting thriller. However, it is important because it presents a story that challenges the morality of its audience. The WikiLeaks movement has revolutionized the future of journalism and placed even further doubt in the transparency of the national government. The film’s writing and a few of its visual sequences offer the audience gritty, heartbreaking insight into the relationship between the truth and morality that WikiLeaks exposes. The movie technically fails in some aspects — it tries far too hard to be visually groundbreaking, and the accents are simply awful — but the writing still manages to bleed through beautifully.

The plot of the film revolves around the relationship between Julian Assange (Benedict Cumberbatch) and Daniel Berg (Daniel Bruhl), and their desperate attempts to expose the government-covered truths around the world. The eventual exposure of Bradley Manning’s leak of classified documents to the Wikileaks website creates political and social turmoil; atrocities covered up by the American government become public, as well as the names of many informants. Assange and Berg must either uphold their policy to reveal the truth to the American public, or recant the names of the informants whose lives would be put in danger.

The true gravity of the movie comes not in its story, but in the psychological relationship between Berg and Assange as they struggle to decide whether their leaks are worth endangering more lives. The film leaves the viewer asking the same questions that plague Berg and Assange: Is unaltered transparency between a government and its people worth more than hypothetical death? The writing immerses moviegoers in this question precisely because neither Assange nor Berg come to a definite conclusion. The beauty isn’t in the actual story, because that’s been told, but in its ability to ask the difficult questions real people must face.

This movie is far from perfect, however. It suffers from visuals that simply try too hard to be dramatic. Over-the-top sequences remove us from reality; Assange and Berg are placed in some sort of metaphorical newsroom, isolated from the rest of the world. Although the effort to be more than a superficial film is appreciated, the visuals are simply detractors from a beautiful, raw and human story. The scenes pitting Assange against Berg jump from realistic to allegorical, highlighting the psychological war being waged –– and are a far better fit than the faintly symbolic interludes earlier.

The acting in the film is quite well done; Cumberbatch and Bruhl feel fully engaged in a relationship that evokes both love and anger, and questions their characters. But the accents — especially Cumberbatch’s — are absolutely atrocious. They don’t ruin the film for viewers, but they are more comedic than dramatic or realistic, forcing the viewer to question whether or not they were worth including at all.

Ultimately, the film isn’t a display of superb directing, nor is it something that will redefine the way in which movies are shot, but it’s worthwhile for viewers who seek transparency in the world around them. It creates conflict and challenges the norms by which people live, and for some, that’s really what film should achieve.