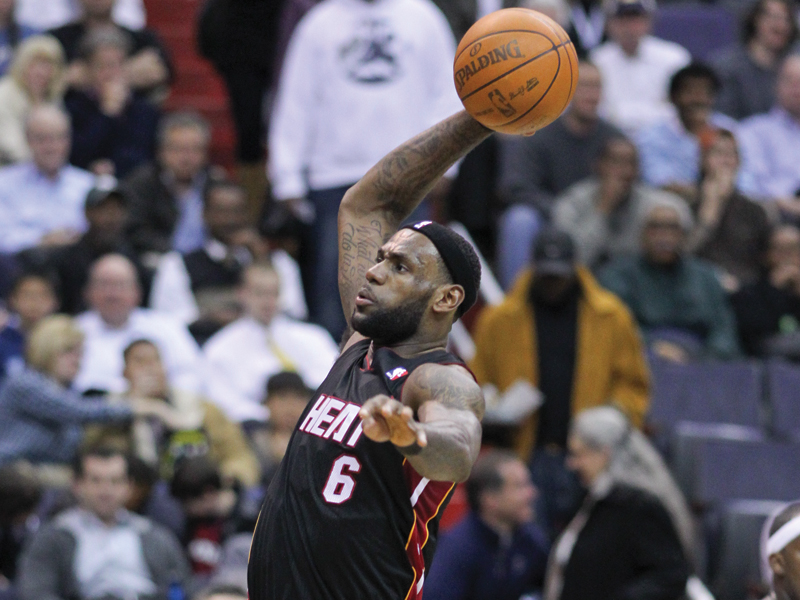 With only one week left until tipoff, the buzz around the league is building. This week we preview the best small and power forwards in the league.

My oh my! Where to start with Mr. James? The reigning two-time defending NBA champ, Finals MVP and regular season MVP, James is clearly the best player on the planet. It took a few years: seven seasons in Cleveland, one horrendous summer that ended with “The Decision,” and the 2011 NBA Finals. But through it all, Lebron James has worked his way up the ladder to position himself in the same company as Michael Jordan.

Last season he led the Heat to a 27-game winning streak before gutting out a seven-game series against the Spurs to win his second NBA championship. The numbers James puts up are video game-esque. Averaging a near triple double, James is a hybrid forward: he runs the point, has the stroke of a guard, can post as a power forward and defends as sound as a center. I guess the only question is: What can’t Lebron James do?

While recently jarring with Dwayne Wade about passing the torch, Durant has over the past couple of seasons accepted the mantle of next generation players. KD is the absolute best and most efficient high-volume scorer in the league. The last man since Michael Jordan to nab the scoring NBA title three consecutive seasons, Durant is often forgotten under the massive shadow of Lebron James. In 2010, 2012 and 2013, he finished second in voting for the NBA Most Valuable Player Award to, you guessed it, James.

Last season he became the youngest player to join the 50-40-90 club, a term for players who shoot at or better than 50 percent for field goals, 40 percent for three-point field goals and 90 percent for free throws during an entire 82-game season. Durant can pull up for a jumper from anywhere on the court, and most times all you see is the swish of the net.

Speaking of volume scorers, look no farther than Carmelo Anthony. The man dubbed as “Melo” is probably the one NBA player who can score the easiest. Whether it be from the three-point line, free throw stripe or in the post, Anthony gets buckets. Last season he averaged nearly 30 points a game, which brought him his maiden NBA scoring title. He shot 44.9 percent from the floor and a career-high 37.9 from behind the arc. Anthony also finished last season with a career-high player efficiency rating (PER).

The stigma that follows Anthony, however, is his inability to hoist that Larry O’Brien trophy. He has only advanced out of the first round twice in 10 years, but the blemish shouldn’t detract from the stellar outings he’s produced on the offensive side. Looking into this season, Anthony should retain his status as one of the top offensive players in the game.

There are so many options when it comes to quality power forwards. You have young guns like Blake Griffin and Kenneth Faried. Proven veterans such as Dirk Nowitzki, Zach Randolph and David West. But who remains supreme above them all? Mr. Fundamental: Tim Duncan. He surprised everyone, and probably even himself, with the resurgence he accomplished last season. After waddling through the previous two seasons, which included a dip to a career low in points per game in 2011, Duncan found his legs again and produced vintage basketball.

A few may be more prolific scorers. Some may grab a couple extra rebounds. But no other player can provide the complete package of Duncan. He can score, rebound, block, defend and facilitate. If that missed layup in Game 7 of the NBA Finals doesn’t weigh too much on his mind, Duncan should still reign as the top power forward the NBA has to offer.

The all-but-forgotten wonder in Minnesota, Kevin Love is probably the most underrated power forward in the league. Plagued by injuries in the past season, Love is a gifted and rare young NBA player. Extremely efficient and versatile, Love does so many things well on the offensive side and can grab 20-plus rebounds on any given night. He has improved his defense to where he’s no longer a liability on the floor.

Love is a double-double machine. Four out of five seasons, he has averaged at least 10 points and 10 rebounds. In 2011, he recorded 53 straight double-doubles, which was one of the longest streaks in NBA history. The Timberwolves have been hit with the injury bug in the past, but with a healthy Love playing alongside crafty Ricky Rubio and Nikola Pekovic, the T-Wolves can compete in the Western Conference and should nab a playoff spot.

LaMarcus Aldridge is probably the most polished offensive player outside of Tim Duncan. He has great size, a well-rounded post game and the cleanest shooting stroke of any American big man (I still see you, Dirk). The one thing Aldridge doesn’t have is a good team. The Portland Trail Blazers are in rebuilding mode, but things could turn around for them in the future. With a young core of Damian Lillard, Nicolas Batum and Wesley Matthews the Trail Blazers have potential.

Aldridge is the player who can have the most impact on the team. He averaged 21 points and a career-high nine rebounds a game last season, which earned the Dallas product his second All Star nod. Moving into this season, Aldridge will continue to fine-tune his offensive repertoire. His ability to score at ease over quality defenders should aid in his bid to become the best power forward in the NBA.