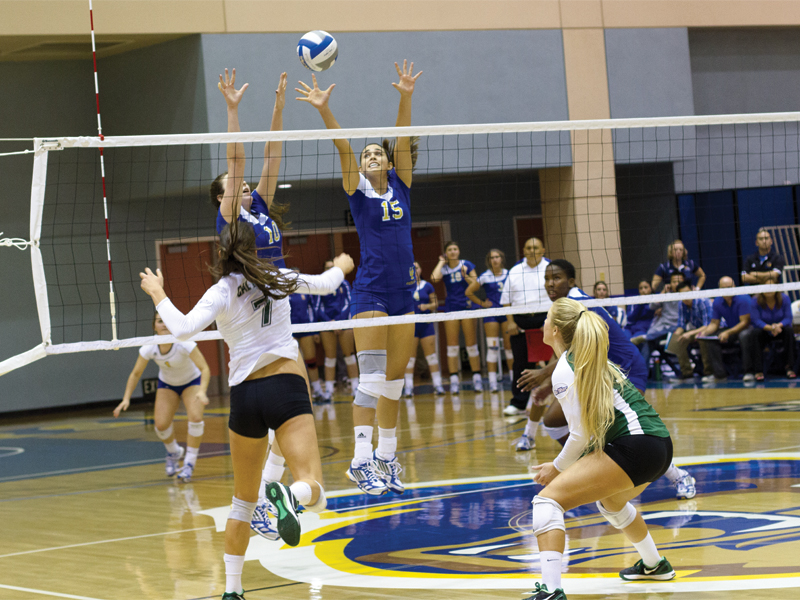 The heartache continues for the UC Riverside women’s volleyball team. Eleven games have come and gone, and the Highlanders are still without a win. The squad returned home over the weekend to face Big West foe UC Santa Barbara on Friday night. The results were much the same: another stinging loss (25-17, 25-15, 25-16). Freshmen Cristina Maietta and Bri Holmes continue to be bright spots for UCR in a cold, cloudy season that sees the team slide to 1-18 overall, 0-7 in conference.

Play began with UC Santa Barbara opening an 8-2 lead that would set the tone for the rest of the set. The Highlanders benefited from opponent errors to close to within four at 13-9, but the home team struggled to keep pace with the hard-swinging Gauchos, led by Katey Thompson, who swung for a match-high 14 kills. UCSB hit the 20-point mark while the blue and gold only had 13 points. Thompson recorded three consecutive smashes to help Santa Barbara close the game, 25-17.

Reminiscent of the first set, the visiting team came out of the gates strong as they built a 10-3 advantage that wouldn’t be threatened for the remainder of the period. The Gauchos outhit the Highlanders, .469 to .167 as they concluded the set with a pair of kills and a service ace, 25-15.

After two listless starts from UCR, the blue and gold opened the third set with some competitive fire as the squad battled to an early 5-3 lead behind kills from Tyler Dorsey and Holmes. This momentum, however, was short-lived. UC Santa Barbara responded by evening the score, winning five straight points to go up 8-5. The Highlanders began to fade, failing to get closer than three points en route to a 25-16 set and match loss.

UCR opened the set in unusual fashion: winning points from the service line. Libero Maddie Hubbell served two unreturned aces to push the Highlanders to an early 5-2 lead. Cal Poly recovered and the teams engaged in a back-and-forth battle that saw UCR pull ahead 18-15 before the Mustangs used a 4-1 run to even the score at 19 apiece. The blue and gold again faltered in the late game pressure as costly errors down the stretch cost them the set, 25-23.

The squads traded points early as both refused to give up any position. From 15-15, the Highlanders sprinted to a 19-17 then 20-17 advantage deep in the set, capped off by another pair of service aces. The Mustangs evened the score at 22-22, however, which put immediate pressure on the home team to close the game. An Annishia McKoy kill gave Riverside a set point, but three straight Mustang kills shut the door on the set, and essentially the match.

The Highlanders showed resolve early in the third as the team opened a 9-6 advantage, but an array of blocks, attacks and digs from the Mustangs began to wear on the home team. Cal Poly took the first lead of the set at 11-10 before extending the lead to 20-16 on an emphatic block. The game was closed on a service ace and the Highlanders left the Student Recreation Center once again without a victory.

Bri Holmes and Tyler Dorsey lead the team with 10 kills apiece while Hubbell and Cristina Maietta each had 13 digs.

UC Riverside next plays on UC Davis on Halloween, Oct. 31.