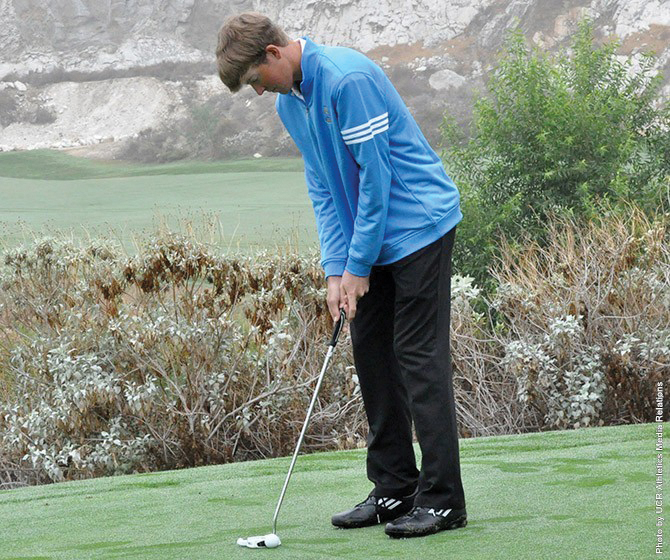 The UC Riverside men’s golf team traveled east over the week to compete in the Herb Wimberly Intercollegiate Tournament in New Mexico and Price’s Give ‘Em Five Invitational in Texas. The Highlanders finished seventh out of 17 teams in the New Mexico tournament, which took place Oct. 21 and 22. A few days later, on Oct. 25 and 26, they produced a 10th place showing out of 15 teams at the prestigious Butterfield Trail golf course in Texas.

Riverside began the Herb Wimberly slowly as the team scored a 596 in the first two rounds of the invitational, which placed them in 11th for the first day. The Highlanders shot a 296-300, one stroke behind 10th-place Kansas. One of UCR’s strongest performers, David Gazzolo, tied for 10th individually, firing a score of 71-72 (143) for the pair of rounds. Three Riverside players — Sam Gillis, Brandon Tsujimoto and Jason Semthiti — all whipped up identical scores of 151 for the round and tied for 51st.

On the final day, UC Riverside revved up its intensity as the team produced one of the best scores for the third round (288). The late surge bumped the blue and gold up four spots to conclude the tournament in seventh out of 17 teams. Semthiti, Gillis and Tsujimoto — UCR’s “Three Musketeers” for the event — all fired scores under 73 for the round. Gazzolo led the squad for the tournament, tying for 16th in the individual competition.

UCR’s three-round total of 884 was only one stroke behind sixth-place University of Texas at Arlington (883). New Mexico won the team competition with a score of 858 followed by Colorado State University (864) and Northern Colorado (871).

Next on the calendar for UCR was the Price’s Give ‘Em Five Invitational. The squad didn’t start as well out of the gates compared to earlier in the week, shooting a 289-298 (587) for the opening rounds, only good enough for 13th out of 15 squads. Tsujimoto led the Highlanders on the day as his score of 69-73 (142) was the 19th-best outing of the tournament. Gazzolo followed closely behind, three strokes back with a 71-74 (145).

A solid third-round score of 289 salvaged some of UCR’s subdued play, as the team wrapped up the invitational in 10th place out of 15 competing teams. All five UC Riverside players scored in the 70s, led by Gillis’ score of 70.

New Mexico steamrolled through the competition, scoring an 836, 11 strokes ahead of runner-up Colorado (847). San Jose State (853), Kansas (854) and Texas El Paseo (859) rounded out the top five. The University of Texas at El Paseo’s Martin Simonsen won the individual title with a 12-under-par score of 204. The Texas tournament concluded Riverside’s fall portion of the season. They next compete at the Arizona Intercollegiate in January.