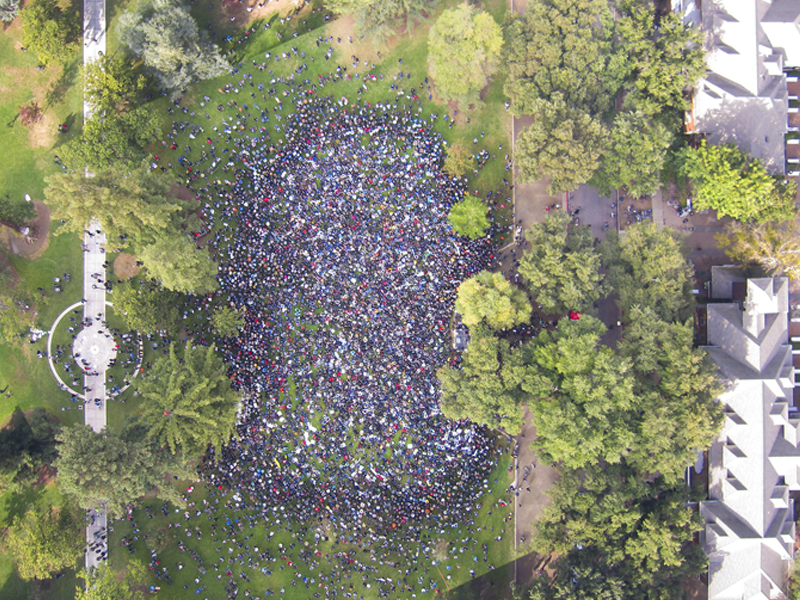 It’s a long time ago, but let’s backtrack about two years to Nov. 18, 2011. The Arab Spring was still going full steam ahead, with civil unrest in Syria and protests in Algeria and Jordan. Dr. Conrad Murray had just been convicted in the death of pop legend Michael Jackson. And in an expression of frustration with politics and political institutions, Occupy Wall Street protests were springing up across the United States.

It is during one of those protests at UC Davis when we can recall the incident of the “pepper-spraying cop.”

Assembling in opposition to California’s divestment from higher education and soaring tuition costs, civic-minded students engaged in a peaceful Occupy UC Davis protest: sitting down, chanting and linking arms. Their goal was to be noticed — and they were, with some people complaining that they were blocking a public pathway and creating a safety hazard. The police were called in to coerce the student protesters to clear the way, and there were any number of nonviolent means to remove them.

Students were understandably outraged at the injustice of the act, and pressure from the student body forced Pike’s ouster and an apology from UC Davis Chancellor Linda Katehi. UC Davis conducted an internal review of the incident and changes were made. Students were placated, the UC breathed a sigh of relief and the incident was buried and forgotten. Life went on.

But interestingly, the story has been resurrected from the grave yet again due to Pike’s claims of suffering from depression and anxiety because of the numerous death threats that he and his family have received after the incident.

However, little pity has been given to the police officer who harassed students, violated their freedom of speech and gave them even more reason to despise security measures on campus. It is understandable that Pike received some form of compensation; coming under siege from death threats is terrifying and unconscionable. What’s disturbing about Pike’s settlement is that it turned out to be higher than the compensation UC Davis provided to its students. Pike’s “comparable” compensation came out to the hefty sum of $38,000, while the students who were victimized by Pike received around $30,000 — $8,000 less than the perpetrator.

It’s disconcerting in the eyes of students and individuals who believe in the freedom of speech to know that ex-police officer Pike was awarded compensation for a situation that he instigated. In the investigation report conducted by UC Davis, it stated that the pepper-spraying incident “should and could have been prevented,” finding the administration and police force responsible. The fault lies within the institution and police force, but because of workers’ compensation laws, Administrative Law Judge Joel Harter found it reasonable to grant ex-police officer Pike money in regards to his mental health.

But this settlement really sends a bad message in that the university will take care of police officers who victimize the students they are supposed to be serving. Not only did the police force violate the students’ right to freedom of speech, Pike also caused physical harm when he assaulted students from only a couple feet away. However, because Pike received more compensation than the pepper-sprayed students, it paints the picture that Pike was the one who ultimately came out of the situation as the victim. By portraying himself as the injured party, he has been able to jab back and take money from the university despite his malicious actions toward students.

The frustration is that students themselves also suffered from the traumatic experience. UC Davis alumni Fatima Sbeih stated that she had panic attacks and frequent nightmares for months after the incident. Two students were hospitalized for medical burns. But this is now overshadowed by the perpetrator, ex-Police Lieutenant Pike.

The UC is taking action to prevent matters like this from happening again, with the university working with the American Civil Liberties Union to develop new policies on student protests, crowd management and “use of force to prevent anything like the November (sic) 18 pepper spray incident from ever happening again.” Thankfully, UC Davis has set up public forums this month to gather feedback from its students to construct a clear and mutually beneficial freedom of expression policy and a plan for an independent civilian oversight board for the police department. More of these meetings between the school administration and students need to occur, and not just at UC Davis.

But whatever concrete steps are being taken, appearances still matter — and the compensation given to Pike does not give the UC a particularly good image. Nor does it help mend the fissures that have riven students from the institution of the UC.

The situation isn’t all bad. Even though the news is generating animosity, ultimately it provides an opportunity to spur the UC to engage in a dialogue with its students and  hopefully provide a route to better response from security and instructions from administration.

The psychological and physical damage that Pike inflicted on the peacefully protesting students cannot be paid for; however, the part they played in the protest has called for change in the way the school handles large scale protests. And even though he is the lucky recipient of $38,000, Pike will still have to live with the guilt, shame and misery of knowing that he is responsible for sending innocents to the hospital.

The students who were harmed, on the other hand, can hopefully find compensation in a reform of school policy — as long as the UC is willing.