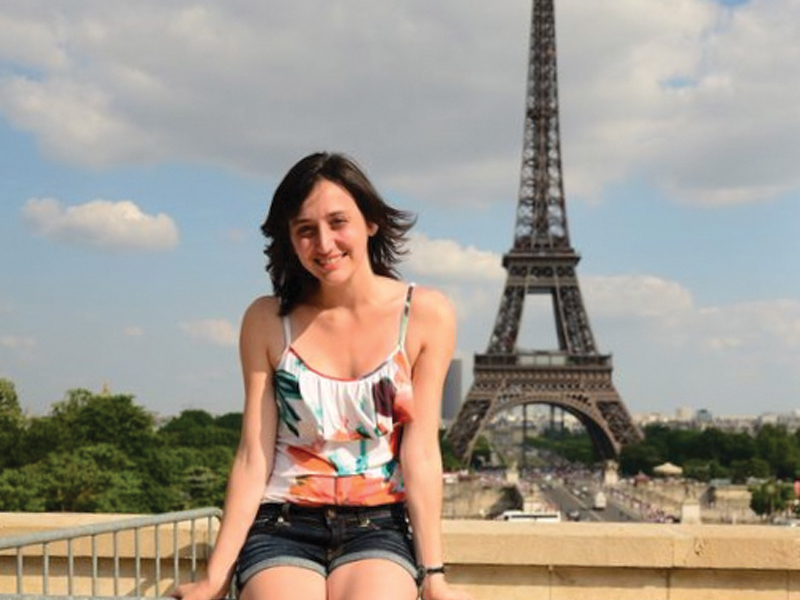 I came to France without knowing any of the language, the culture or the monuments (besides the Eiffel Tower and “bonjour”). I was worried that I would get lost and not be able to find my way home, or I would try to order a baguette and nobody would understand me.

I have always wanted to study abroad. When I came to UCR, I knew I could not leave the university without doing it, so I applied during my first year. I chose the Paris Language and Culture program because I wanted to learn a new language as well as have the pleasure of living in another country for a couple of months. Luckily, I have a family friend who lives in Paris who I was able to live with and who introduced me to the French culture.

I will never forget the moment I stepped out of the metro station with my luggage in my hands. I looked up at the tall European buildings with a huge smile across my face. That is when I knew I had made the right decision to study abroad in Paris.

Over the course of my two months there, I took a total of three classes — two French language courses and one on French culture. In a further exploration of French culture, every day after class, my friends and I would ride the metro to a famous Parisian site. We visited l’Arc du Triomphe, le Louvre and Notre Dame multiple times throughout our stay.

It was really interesting being immersed into a new culture with a new language. I tried to help my friend set up her phone at a local store, but we didn’t know enough French and the employee didn’t know enough English to set it up. We ended up communicating by drawing on a piece of paper and using Google Translate!

Being there over the summer, I had the opportunity to experience Parisian culture at its finest. I listened to music around the streets of Paris at Fete de la Musique, celebrated France’s independence during Bastille Day, danced at the Fireman’s Ball and even watched the gay pride parade.

In addition to traveling around Paris, I also took side trips to Brussels, Amsterdam, Brittany and Barcelona. It was amazing to see how different each city’s culture is, even though they are only a short train ride away.

Being abroad also encouraged me to step outside of my comfort zone. I tried escargot and stayed in a hostel with strangers for the first time. My most memorable experiences from studying abroad were the times my friend and I would walk around the streets of Paris and get lost. We had so much fun exploring areas we never would have seen otherwise and always managed to get ourselves back to the metro without a map.

During our last days in Paris, my friend and I were craving crepes so we decided to go to our favorite creperie, but it was closed. We ended up walking for an hour until we finally found an open creperie and by then, we had no idea where we were. It didn’t matter though, because at least we got our crepes!

One of the coolest experiences I had was going to my professor’s apartment on the last day of class. A couple other students joined as we ate baguettes, tried different cheeses off of a cheese plate, and drank wine, while talking to our professor about her life and practicing our French. It was like a typical French scene from a movie.

By the end of my program, I felt like a true Parisian. I was a regular at L’as du Falafel (the best falafel joint in Paris) and had mastered the metro system. I knew where to stop for a good sandwich or crepe and where the best nightlife was. I felt like I had a new home.

I learned a lot from my experience in Paris. I became more independent and culturally aware. To live in another country gives you an experience you can’t find any other way. I loved it so much that I am applying to study abroad again in the fall. Now I’m ready for my next adventure: Madrid!