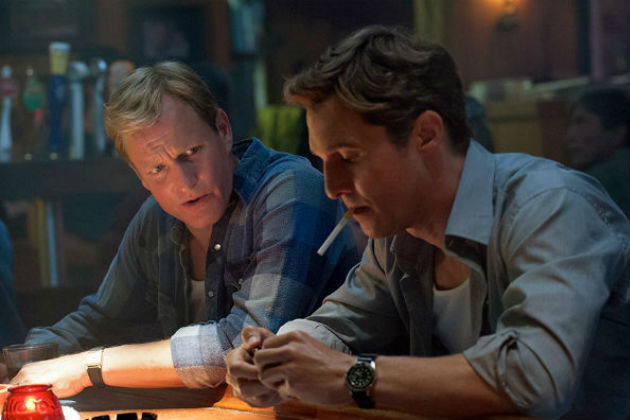 Like a knot you’ve worked at until you finally feel it loosen, the many storylines throughout “True Detective” are finally coming undone in “Who Goes There.” Marty Hart (Woody Harrelson) is struggling to hold on to his own family, Rust Cohle (Matthew McConaughey) slips back into his undercover life and the case erupts right in front of our tragic detectives.

The structure of the episode is unique. For the first 30 minutes we only see Marty being interviewed in the present, and it’s a nice change to show how Marty’s life was torn apart back in ’93. Throughout these scenes of him being interviewed, in the past Marty’s mistress reveals their relationship to Marty’s wife and he finds himself crashing at Cohle’s place like the women of “Two Broke Girls” — but trying to solve a ritualistic pagan murder.

Harrelson’s acting when he gets the Dear John letter is heartbreaking. His character is on the phone with his mistress first, and then his wife’s father. The movement in his character from white-hot anger to absolute desperation is clear in his face alone as he pleads to his father-in-law for forgiveness. After his meltdown, Marty does what any man would do after getting dumped by his wife for cheating: He goes back to work. Marty hunts down a drug dealer at a rave, and with a gun to the kid’s face, he discovers who the killer (Reggie LaDue) sells his meth to: a motorcycle gang — the same one that Cohle belonged to when he was undercover.

This is when we see McConaughey do some seriously brilliant work. Back in ‘93 he opens an archaic metal trunk that contains his old life: bike club jacket, grenades and a bottle of Jameson, to just name a few items. We witness McConaughey transform from Rusty Cohle to his old, undercover persona. On top of these two, we still see Marty from the present-day interviews. His range is something extraordinary, and deserves attention.

All of this takes up nearly the entire episode. Even though Marty witnesses his marriage disappear in front of his own face while Cohle infiltrates his old bike club by diving headfirst into meth, the episode still feels a bit stagnant because there still wasn’t enough revealed about the murder. Unless more is shown soon, I might start to get a little worried. Regardless, the flawlessly filmed gunfight at the end will keep you standing just feet from your television or laptop. We begin to see a beautiful buddy-cop relationship develop between our two detectives while everything else around them is changing at 100 mph.

I haven’t really mentioned the writing throughout this entire season because of the ways these two actors carry the show, but that’s not because the writing is bad. In fact, Nic Pizzolatto, sole writer of True Detective, is doing some amazing things for television. He has created four characters embodied by just two men. The many characters outside these two are fleshed out completely and feel just as important as the two detectives, and on top of this, the plotting and world he has developed is intricate and well-planned — all while still feeling like the writer isn’t even present. I just hope Pizzolatto has it in him for more seasons, because I know I will be tuning in.