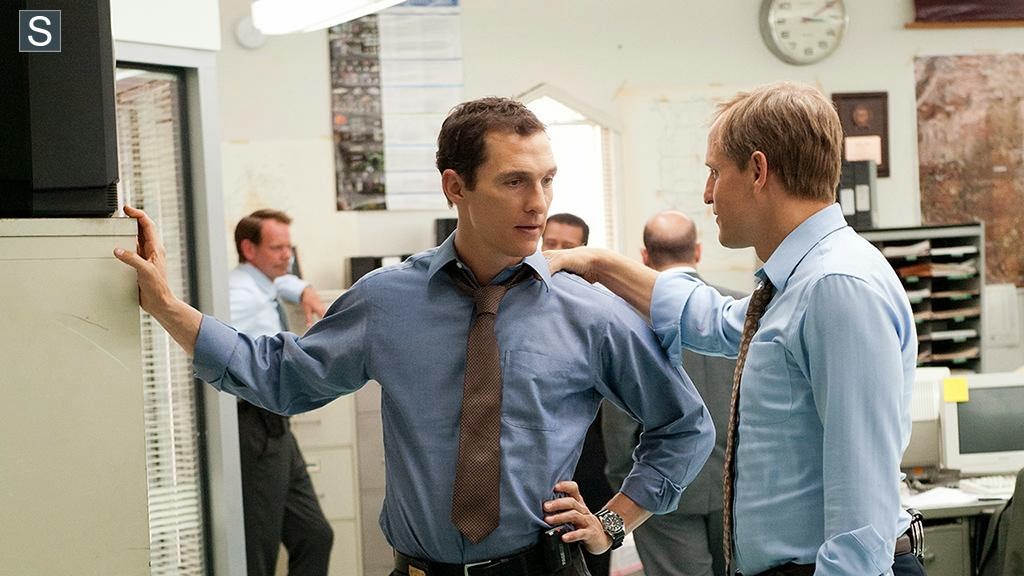 I guess it was destined to happen. Any great television show has to have a couple of weak episodes from time to time. This week’s episode of True Detective, “Haunted Houses,” was slightly disappointing. I’m doing my best to not write these words, but I have to. We saw the usual gold involving Marty Hart and Rusty Cohle, but this last episode was just lacking the usual creepiness, stress and danger each episode is usually plagued with. I say disappointing in very light terms, though, because the ending has me frothing for next week.

Now that the detectives are in 2002 and trying to get on with life after killing who they thought was the murderer, Cohle is back at it again, re-opening the Dora Lange file. I was very excited last week with the idea of the whole series pretty much starting over halfway through the season, but there is that lull that comes with a brand-new murder, and “True Detective” needs to get things moving quickly to keep that lull from coming to a complete stop. Cohle begins interviewing Bill Lee Tuttle, CEO of a super-church organization with multiple ministries, education initiatives and ties throughout the police department. I love widespread church and government corruption as much as the next guy, but we’re starting square one on the investigation again and there are only two episodes left. I just hope that next week speeds things up.

Even though the hunt for the murderer is slowing down, the relationship between Cohle and Hart is at an all-time high, or low, depending on your morals. The drama that ensues is the sole reason that I won’t say that this episode is a complete disappointment. Hart’s wife, Maggie, sends him on an errand for a mass amount of tampons, and the vices begin to flood in. He breaks his abstinence from alcohol and winds up at a bar, talking to the same girl he saved from a prostitution ring back in 1993. Just like that, Hart is back into his old philandering ways, except this time his wife gets the proof via pictures on his cell phone and everything goes haywire. While this all seems to happen a little too easily, it does create some great drama and reinforces the viewer’s assumptions that Hart never truly became a changed man. That would have just been too cheesy.

Hart’s wife ends up at Cohle’s apartment in tears because Hart is at it again. Things heat up and amount to quite possibly the most awkward sex scene in television history. On the whole it lasts a whopping twenty seconds or so, and the sadness in Maggie’s eyes is apparent throughout the entire act. Once Cohle pulls up his pants, all he can say is, “What the fuck are you doing here?” He then proceeds to scream at her to leave. Maggie gets the final straw when she tells Hart about it all and breaks him down in one single line: “I haven’t been fucked like that since before the girls.”

Everything between our two protagonists is at a breaking point, and that’s where we find them both, in the CIS parking lot repeatedly turning each other’s faces into hamburger meat. We finally get closure as to why, when Marty and Rusty are being interviewed in 2012, they are no longer in communication. This closure feels incredibly rewarding — but that isn’t the end.

The investigators talking to Hart in 2012 question Cohle’s motives and why he is probably the murderer, which causes Hart to leave then and there. He’s driving down the road when a very familiar red Ford 250 is honking and flashing headlights to get him to pull over. Cohle, in his long hair, walks up to the door and says one thing: “Marty. Long time. Thought maybe we should talk. Buy you a beer?” And with that, Hart follows Cohle and the episode comes to an end, leaving our two detectives once again reunited in a present timeline. Overall, this ending is worth the stagnant storyline, and will leave you excited for another week.