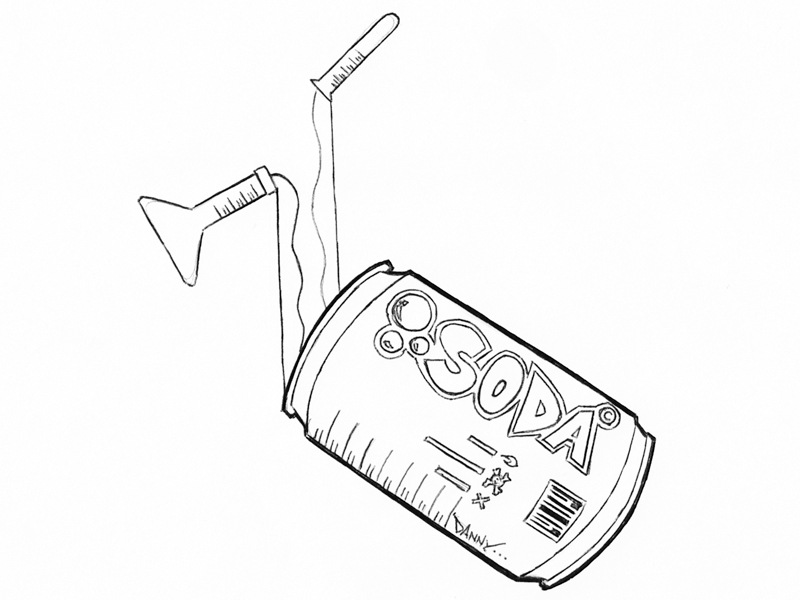 Sugary beverages such as soda have become a common drink of choice for many Americans. People drink it because it tastes good, but just because it tastes good does not mean it is good for the body. A recent Field poll has shown that a majority of the California population is in favor of implementing mandatory warning labels on sugary beverages. State Senator Bill Monnin has proposed a possible label example that could read, “STATE OF CALIFORNIA SAFETY WARNING: Drinking beverage with added sugar(s) contributes to obesity, diabetes, and tooth decay.” It would share similarities to already-used labels warning of the risks of smoking.

The warning label would be an excellent idea because even though some nutrition facts are on sugary beverages they are oftentimes overlooked due to small fonts that many people simply glance over. Having a larger, more prominent label would catch people’s attention and have an impact on the beverage choices they make in their day-to-day lives. Along with the label, additional information could be made easily accessible to the masses via the Internet to further educate what overconsumption of soda can have on the body.

If you keep track of all the empty calories and sugar you are consuming from sodas after a long period of time, it adds up. A typical 12-fluid-ounce can of Pepsi has 150 calories and 41 grams of sugar. Now, that may not seem like a lot of sugar, but when you look at those 41 grams of sugar — which equal around 10 teaspoons of pure sugar — the truth behind sodas starts coming to light. Most people would have the common sense to agree that eating 10 teaspoons of raw sugar would be extremely unhealthy but since it is blended into a beverage most people do not realize how much sugar they are actually consuming. Along with the warning labels a possible change could be made to how nutrition facts are presented where the actual amounts of sugar in a drink is clearly made known to all people.

According to a 2012 health study reported by CNN, one in four Americans get at least 200 of their daily calories from sugary drinks. Over a long time span of continued consumption, those calories and sugar loads can have debilitating effects on the human body. Such effects include an increased likelihood of contracting heart disease, diabetes, weight gain and obesity, among many others. Informing people eventually leads to more people opting for healthier substitutes for their beverage choice. Implementing more explicit labels to tobacco products had a positive effect in informing the masses about the dangers of using tobacco products — so if effective labels worked in reducing tobacco usage, then the labels could do the same for sugary beverages.

A person can easily reduce how much sugary beverages they consume by even just deciding to drink more water. No change in how you cook your meals is necessary because water is just water — and it is healthy for you with zero calories, and more importantly, zero sugar. Over a timespan of months and even a few years, simply reducing or eliminating sugary drinks with plain old-fashioned water has been shown to help reduce obesity and help those already obese shed weight faster. A study conducted by researcher Deborah Tate, Ph.D., an associate professor of nutrition at the University of North Carolina at Chapel Hill showed that people who opted to drink water over diet or regular soda were more likely to lose excess weight at a quicker rate. The success of the study is showcased from the fact that of those 318 overweight or obese people who participated, those who drank only water were more likely to experience a 5 percent weight loss — a percentage far more prominent than those who were instructed to drink soda or diet soda.

Besides the negative effects that excess sugar in sugary drinks can cause to the body, the warning label could also bring attention to other ingredients. Ingredients such as phosphoric acid, a syrupy liquid used for fertilizers, in rust-proofing metals and at one point, as a flavoring in soft drinks. Part of the reason sugary beverages are consumed on such a large scale is most people do not know the harmful chemicals in them. If the warning labels clearly stated information on what some of the soda ingredients were comprised of, more people would be likely to opt out of drinking those kinds of beverages due to concern for their health.

Like all good things, moderation is key. Almost everyone sometime in his or her life has drunk a soda — the important thing is for people to know what they are putting into their body. At some point in the lives of all individuals, they must take responsibility for the long-term effects their early life nutrition choices have made, so the earlier the change is made, the better. The requirement for sugary beverages to have a warning label with information could aid in the long run of making the population more aware of how their drinking choices in the present can benefit their overall health in the future.