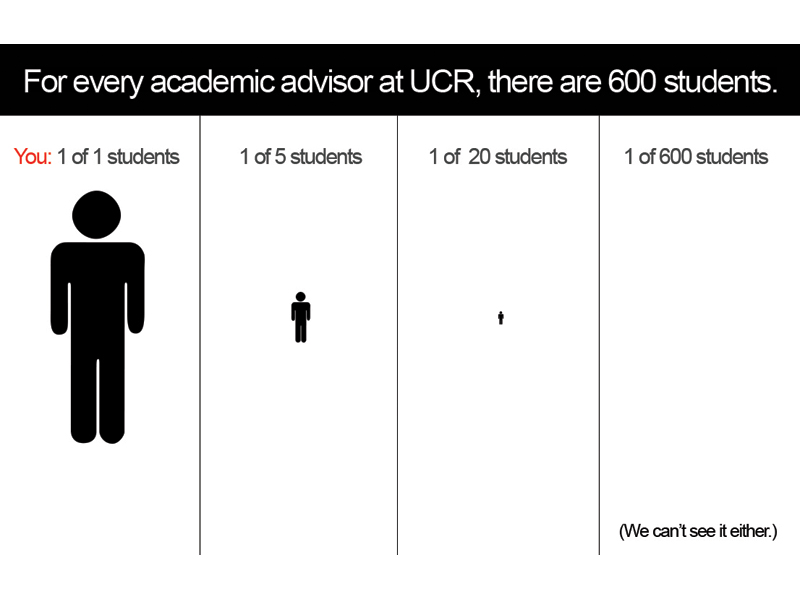 As the tail end of class registration nears and students await the arrival of second pass, too many students are being reminded that they won’t graduate on time. Sometimes, it’s due to a course conflict, with students forced to choose between two classes that take place at the same time. Others are stymied by the unit cap, a blockade that prevents students from registering for all the courses they need. But whatever the reason, unless you’re one of the lucky students with priority registration or a senior ready to graduate, odds are you aren’t getting into a class that you need.

At that time, it’s nice to have someone to talk to. It’s even better if that person knows about your major, so you can figure out a way to rebound. It’s best of all if that person can alter your enrollment — and maybe find a way inside that class you never thought you could get into. But no student is fortunate enough to know that kind of person, right?

In actuality, there is such a person, and that’s your academic advisor. It shouldn’t be a surprise to anyone that the person whose job it is to inform students about their major, what it takes to graduate and where future jobs in the field lay is best situated to help students succeed. Several studies have confirmed the obvious: more, better academic advising increases student success and improves colleges’ four-year graduation rates. If colleges want to graduate more of their students in four years, and as Gov. Jerry Brown has strongly pushed for, there need to be more academic advisors helping students succeed, including UCR — especially UCR.

The National Academic Advising Association (NACADA) recommends that there be one academic advisor for every 300 students. That sounds reasonable, perhaps even a bit large. But UCR’s advisor-to-student ratio is far smaller. In fact, there are half as many advisors as NACADA deems helpful, with 600 UCR students crowding the desks and emails of a single academic advisor. That’s far worse than the national average among four-year public universities, which NACADA pegs at a comparably small 260 students per academic advisor.

How are students supposed to receive quality advising from advisors being constantly pelted with a never-ending hailstorm of emails, requests for information and enrollment advice? It’s hard enough for a lecturer to see a single student in University Lecture Hall, with its 500-student seating capacity. How should an academic advisor be expected to deal with an additional lecture hall’s worth of students, all clamoring for attention at the same time? Professors at least get teaching assistants.

Evidently, the administration has come to the same conclusion. Buried in the chancellor’s 2014 graduation rate task force report, which discusses ways to improve UCR’s four-year graduation rate, is the observation that the body of academic literature overwhelmingly indicates that having good academic advising relates positively to having good graduation rates. And given UCR’s high first-generation college student population and low-income student population, adding advisors at UCR perhaps has even greater upside potential, with the authors of the report noting that “Academic advisors are particularly important resources for first-generation and low-income students.”

Adding more advisors to UCR’s campus can have nothing but benefits for the students here. Students will be better able to connect to the people who can control their class schedules and eventual graduation time. Instead of being blindsided and set back a quarter or year by a missed class, students will be better able to plan and ensure that they have all the pieces to their graduation puzzle.

Another thing other UCs have in common besides higher four-year graduation rates is a shared consensus that increased academic advising is beneficial. A report from UC Davis worries about “high student to advisor ratios that make it difficult for students to access advising in a timely fashion and for the advising community to be proactive.” Some departments in UC Berkeley feature advisor-to-student ratios of as low as one advisor for 156 students.

So the initial investment in academic advisors may seem like a hefty sum at first, but it will pay off in the long run via increased tuition revenues, increased individual donations and increased state funding. In an era of uncertain state investment and complaints about rising tuition, adding academic advisors averts the false choice of selecting only one option, instead offering an all-of-the-above approach.

It may be true that adding academic advisors will not equally help everyone. There are students who only talk to their academic advisor when it is absolutely necessary and do not make efforts to build relationships. But there are also those who genuinely seek out advisors for help in not just their college careers, but their future more broadly.

It is certainly not the case that academic advisors don’t care. There may be a few bad apples here and there, but that’s to be expected of any administration that employs over 5,000 people. On the whole, advisors are trained professionals whose job description is to support students in their academic endeavors. Sometimes it just seems like they just don’t have the time to provide as much support as they’d like.