Highlander
Home Opinions What the frack is fracking: the implications of ‘cleaner’ energy 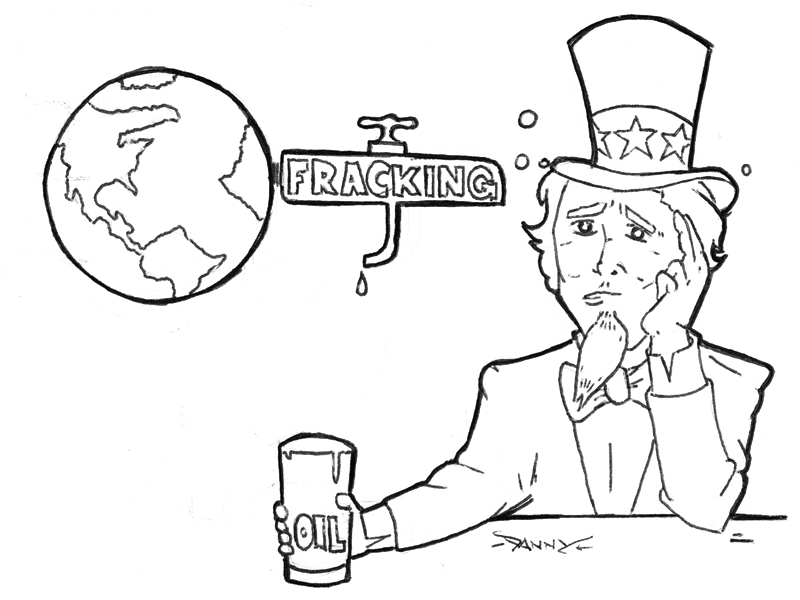 The practice of fracking has become extremely convoluted in public comprehension, whether regarding its processes, its economic implications or its potential environmental impacts. Fracking is just pretty much confusing. But as quickly becomes apparent, it’s a complicated matter that needs more exploring. Ultimately, fracking is a short-sighted proposition by gas and oil companies seeking profit, while pushing the sentiment that it is good for economic growth and “cleaner” energy, a one-sided response to this antiquated practice.

It’s difficult to try to describe fracking, also known as hydrofracking, but in the simplest of terms it is the processes of extracting natural gas and oil from about 9,000 feet below the earth’s surface of soft sedimentary rock that has been compiled over tens of thousands of years.

The process of hydrofracking would not be done without the use of an excess of water, about two to four million gallons, depending on the well. This mixture of water is combined with sand and a cocktail of chemicals. Twenty-nine of those chemicals regularly used in the hydrofracking process have been deemed as potentially hazardous to humans and the environment by the U.S. House of Representatives Committee on Energy and Commerce.

The profit-driven oil industry that is seeking domestic reliance on energy and oil sees fracking as the future of energy extraction and has marketed it as a “cleaner” alternative to energy sources such as coal. It all sounds all so fine and dandy. A hopeful prospect on the horizon for the American economy, as seen in a 2012 energy boom that created 2.1 million jobs, fracking contributed to almost $75 billion in federal and state revenues, and provided a whopping $283 billion in GDP gains.

With the geopolitical hands of the U.S. drenched in war, oil and other resource acquisition, the mere thought of self-reliance with gas and oil sounds dreamy. But that fantasy can only last as long as our natural nonrenewable resources do. The practice of fracking needs to be sustainable and environmentally conscionable for this extraction of natural gas and oil to be a successful endeavor. But that’s wishful thinking when we have seen the tainted record of various gas and oil companies that consistently degrade the Earth with little to no remorse with profit in their eyes. There have been numerous incidences of trains containing fracked oil and gas combusting, fracking putting the lives of the workers at risk, natural tanks rupturing and unforeseen health effects. Our oceans, rivers and lakes have been compromised, as well as our drinking water, soil and ecological systems — all due to our toxic love affair with oil and gas. The true worry comes via an always-disconcerting inquiry: “What about the future?”

As a lecture given at UCR on April 9, 2014, professor Sue Brantley from the University of Pennsylvania presented her data and findings on the fracking industry within Pennsylvania. As Brantley began to discuss the public outcry of fracking’s hazards to drinking water, she explained that earthquakes and methane build up. But it became quickly apparent this was not the chief concern for her. What Brantley elaborated on several times throughout her talk is one of the biggest issues in understanding the environmental impacts, and more specifically the water impact of fracking — the data.

Not to say there is not vast data on the subject; on the contrary, there is a substantial amount of research from the government, academic institutions and nonprofits on water quality issues and the effects of fracking. The problem lies with a lack of accessibility of the data that exists. This, also coupled with the fact there is not enough research on the long-term effects on fracking, is something disconcerting as it is a substantial industry in the U.S. — in the United States there are 82,000 wells in 17 states that are operating. This makes it incredibility difficult for state and local governments to make proper regulation recommendations, for the public to be adequately informed on the effects of fracking and the industry to take responsibility for their procedures and practices. A way in which Brantley is trying to address this data gap is through one of her projects, the Shale Network, an online database where citizens and scientists can store data. It is arguably the largest database for water quality information.

I have heard of fracking’s potential for economic growth through the creation of jobs and savings on energy bills for the American public. Seen as the “cleaner” alternative to coal and oil, fracking’s selling point comes from a deeply rooted truth of the contemporary living standards first-world countries like the U.S. have grown accustomed to. Fracking reflects the necessity of more energy to keep up with the pace of population, expansion and development of modern human existence. Fracking extraction allows for the price of energy we have become so reliant upon to be kept relatively low in the present. Without an eminent urgency to address the effects of fracking on future generations, the grave impacts of our self-serving actions in regards to our energy consumption will in turn affect the future.

What gives California immediate hope when it comes to fracking is that as of April 7, 2014, there was a committee meeting held in the state capital during which SB 1132, a bill that is seeking a temporary ban on fracking in California, was approved. It would place a moratorium on fracking until a study is completed and the practice is determined safe for the environment and people’s health. Countries like France, Bulgaria and the United Kingdom have already either prohibited or placed a moratorium on fracking. California’s consideration of a moratorium places a responsibility on the golden state and the larger U.S. to invest in sustainable renewable energy that does not rely upon antiquated processes. Fracking is living in the past — so let’s look to the future.