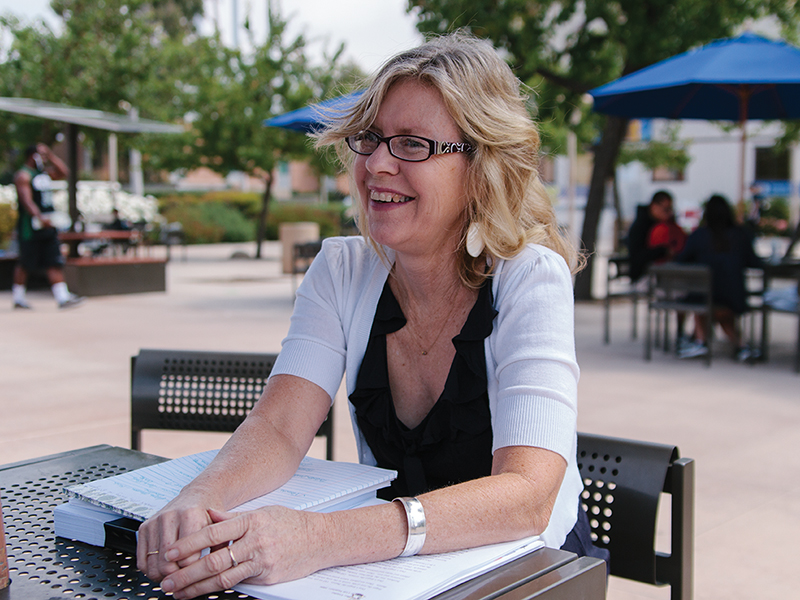 Only a couple of weeks ago, Susan Straight, UCR’s beloved professor of the creative writing department, received the 2013 Robert Kirsch Award. This award, presented at the Los Angeles Times Festival of Books, recognizes a body of work about the American West. Right alongside other noted writers, like John Green, professor Straight accepted her award in front of 1,200 people. She earnestly expressed, “It’s one of the best honors I could think of receiving.” Being a Riverside native and having a deep-felt connection to her home in Southern California, professor Straight has involved the American West in all of her work and said that growing up in the American West has made her want to tell stories about it.

She mused, “I write about places no one talks about.” And, in fact, she thanked these smaller Californian cities (like Corona and Muscoy) in her acceptance speech, right after she thanked her family and all of the people who tell their stories to her. “Landscape is like another character,” Straight explained when addressing how important the role of the American West was to her work. “And it’s a major character.” Describing California wildfires, orange groves, deserts and immigrants in vineyards, it was clear that she factored all of the little details into her setting to capture the soul of the American West.

Straight is noted for allowing neglected voices to be heard, and many of her characters seem to be of mixed heritage. She said that growing up in Riverside, most people around her were mixed, but that the rest of the United States doesn’t get that kind of diversity.  The culture of Southern California lends itself to many unique people and experiences. “I write about people no one else really cares about,” she explained. Indeed, she’s written about a Mexican-Indian woman deported and separated from her child, a family affected by the Tulsa and LA riots and a young black man falling into a life of crime, among other things. “That’s why the Kirsch award is so great. It makes people pay attention,” she said.

In fact, one of her most developed characters in her new novel, “Between Heaven and Here,” was based on a child with cigarette burns who befriended Straight’s daughter in kindergarten. Straight took this neglected voice and turned it into a 17-year-old character who was poor but desperately wanted an education and survived in the world “with just her brain.” It is stories like these that Straight wants to tell the world.

And, being a famously good listener, she takes in all the stories she can collect from strangers and friends. “You have to be a good listener,” she said. “And you have to go out in the world. A lot of writers don’t do that nowadays; they stay solitary.” But it is obvious that much of Straight’s inspiration has come from her experiences in the world and she is clearly not the solitary type. Straight expressed her gratitude for being able to hear so many voices in her life. “It is always about story,” she said. “A story you can’t get out of your head is the seed of a novel. And it’s about making a world around that story.”

Professor Straight has been preoccupied recently with the exhibition Wild Blue Yonder, which tells the stories of the unspoken voices of war in Inland Southern California. Among them is the story of Vietnamese women whose husbands fought for the U.S. during the Vietnam War and were sent to re-education camps and thus the women ended up working in nail salons. The art museum show is a collaboration between photographer Douglas McCulloh and Straight, and combines both written and visual work. She expressed excitement for the exhibition and will be kept busy with that and her professorial duties for the next few months. Besides that, we can expect the renowned creative writing professor to continue telling her stories for a very long time.