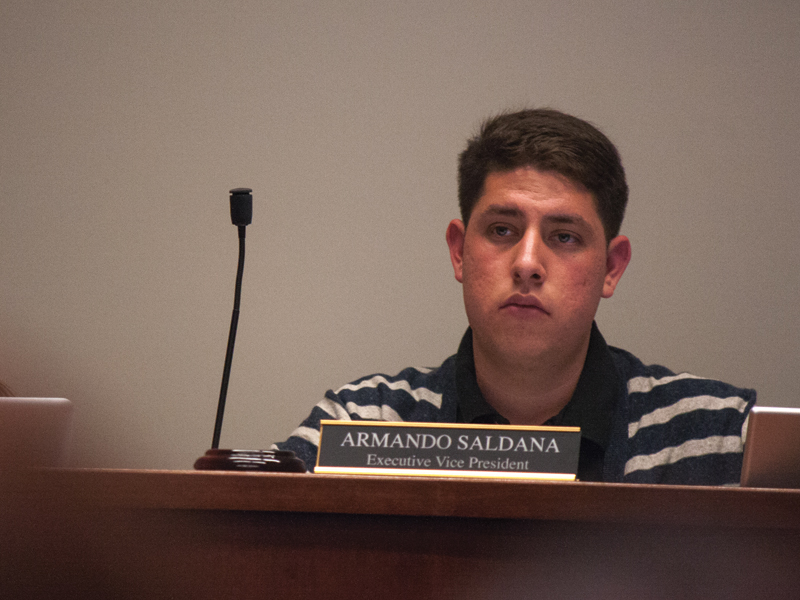 Fresh new faces painted last week’s ASUCR special senate meeting as newly elected candidates carried out one of their first acts in the senate by selecting Senator Devin Plazo as the new president pro tempore, a role that oversees the legislative processes within ASUCR. Contentions arose when senators considered and ultimately approved the selection of Stephanie Rose, a walk-in candidate who missed the application deadline, as the new elections director. Both will take office in the 2014-15 academic year.

With three candidates — all holding CHASS senate seats — eyeing the position of president pro tempore, Senator Akeem Brown was the first to grace the podium and speak on why he was the most qualified candidate. Brown, a 29-year-old transfer student from Oakland, placed great emphasis on his prior experience as a corporate paralegal of seven years and an intern for former Riverside mayor Ron Loveridge.

Following his speech, Senator Colette King referred to her past experiences in delivering resolutions, such as the Remembrance Day of the Armenian Genocide, with the Armenian Student Association. King also contended that if elected, she would work with the marketing committee to create online videos that showed the steps students could take to write legislation.

“I was in a (Legislative Review Committee) meeting and a lot of students didn’t know how to use the words to make something sound coherent (to write),” she said. “If we want more legislation, we need to outreach students. A lot of students don’t know that you can write legislation.”

Senator Devin Plazo pointed to her full-time communications position in ASUCR and her initiatives to save the Riverside School of Arts as what made her stand out the most.

“In the past, this position has focused mostly on LRC and leadership entirely but I want to build strong bonds with each other, I want to be the person you come to and trust.”

Michael Ervin immediately attempted to fill his role as the new executive vice president by giving the senate simple tips on how to deliver a motion, abstain and ask for additional time to speak. Both the senate and audience in the gallery were given the opportunity to ask the senate questions. Few questions were asked to each candidate and the first position ultimately fell in favor of Plazo, who will replace the current president pro tempore, Aaron Johnson, in the following academic year.

Afterward, walk-in candidate Stephanie Rose stood up from the galley as the senate switched discussions to the elections director position. “I’m not on the agenda, but I’d like senate to consider me for the position,” Rose said. “I did not know about the application until the due date had already passed and then I did try to acquire an application, but I was told that I would be unable to fill it out.”

By a 13-2 vote, the senate voted to accept the galley member as an applicant to run alongside two candidates: Shaunt Oozoonian and Angelica Chhikara.

Current Elections Director Chris Sanchez later argued that the mandatory candidate workshops are meant to give members of ASUCR time to verify specific requirements; namely the 2.0 GPA requirement all applicants must have. Sanchez also said that the elections director application was out for “one week and a half.”

Oozoonian, the 2013-14 ASUCR parliamentarian, referred to his internal senate experience, volunteering for various events held by the elections committee. He vowed to maintain neutrality throughout the elections process with the help of a cohesive committee.

The tearing down of posters and the lack of follow-up for violations were a few issues that Chhikara perceived about this year’s elections.

“The most important concern with elections was the lack of balance between a smooth transition of power and a higher voter turnout,” Chhikara said. “The elections was too focused on (the latter), causing a lot of party politics to take place.”

Rose, the chapter president of Greek sorority Pi Beta Phi said that she became familiar with the elections director position through the popularity of the ASUCR elections, which drew 38 percent of the total student voting population.

“Something that I think would be beneficial is to have an elections director with an unbiased and fresh perspective,” Rose said. “I am not involved in ASUCR and I think because of that and my experiences …  I would be a great candidate for (the position).”

Despite further arguments over whether experience trumped fresh perspectives in the position, Rose was ultimately elected as the elections director. Both positions of elections director and president pro tempore were selected under a secret ballot vote.

The senate also unanimously approved to shift the deadline for selecting a new vice president of finance from the end of week seven to week nine. With the graduation of three current justices on the ASUCR judicial branch, president-elect Nafi Karim will select replacements, who must then be approved by at least a two-thirds majority vote by the senate in the upcoming weeks.