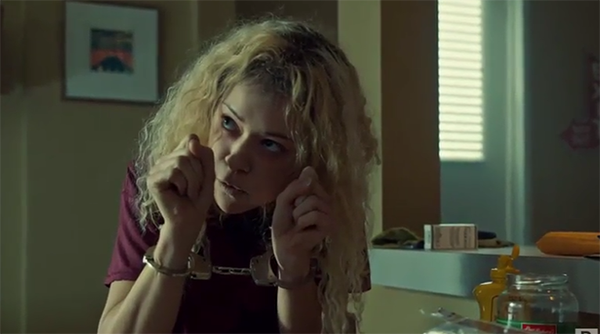 One thing I’ve wanted more of in “Orphan Black” is interaction between Helena and Sarah (both played by Tatiana Maslany). It was intriguing in season one that Helena, who had been killing clones, had several opportunities to kill Sarah but didn’t take them. The reveal that they were twin sisters was just icing on the cake, giving them a dynamic that could be explored in an interesting way.

That, more than anything, was why I never really believed Helena was dead after the season one finale. As a writer, I know that when you have a relationship between two characters which is that intriguing, it makes you want to keep writing, and you don’t just give that up.

So, I am very excited that halfway through the second season of “Orphan Black” we are finally getting sisterly interaction between Helena and Sarah. In fact, most of “Ipsa Scientia Potestas Est” seems to revolve around the sisters, even if they don’t end up sharing that much screen time.

After Helena saved Sarah from Daniel’s attack last week, Sarah – and more reluctantly, Felix (Jordan Gavaris) – have taken her in. Felix’s troubles trusting Helena, which Helena doesn’t make easy when she hisses at him and steals his pen to use as a potential weapon, are light moments in a season that’s been fairly shy of them.

However, Helena ends up spending more time with Art, who tries to get her to talk about the Proletheans and the mysterious “Swan Man” – this turns out to be Rachel’s father, who may still be alive – and indeed, Helena eventually helps Art find a Prolethean storage locker. All Helena wants to do is help Sarah, but she’s always been more of a doer. So, she escapes Art and heads off to take care of Sarah’s problem by killing Rachel (Maslany).

Rachel is downright cruel in this episode in her attempts to bring Sarah, Kira and Helena in. One, she has Felix set up for the murder of the police officer whom Daniel killed by getting Felix’s fingerprints on the gun. Two, she stops Cosima’s (Maslany) medical treatment.

I’m willing to see some method to Rachel’s madness, however, because I don’t want Rachel to be a boring villain who just does evil things to the main character. I want her to have more depth than that, and I suspect Rachel is so willing to play ball this episode because Helena killed Daniel.

But as Sarah knows, killing Rachel is not the answer, and she talks Helena down in the best scene of the night. Helena accuses Sarah of wanting to use her, the way everyone in Helena’s life has used her, but Sarah denies it. Instead, she breaks down in tears because, as she tells Helena, she thought she’d killed her own sister.

Sarah and Helena are both characters who haven’t had much in the way of family. Sarah had Felix and Mrs. S at least, but she was still an orphan. At the end of the scene, seeing the two walk off, leaning on each other, it’s everything I hoped bringing Helena and Sarah together would achieve.

Aside from exploring Helena and Sarah’s bond, the other major point of the episode was shifting loyalties.

While Paul (Dylan Bruce) may have been willing to help Sarah in the season premiere, in “Ipsa Scientia Potestas Est,” he finds himself even more entrenched within the Dyad Institute when Rachel asks him to be her new monitor since Daniel – her former monitor – is dead.

It’s hard to say whether this is a position he wants to be in. As far as we know, Paul hasn’t done anything to contact Sarah or help her recently – and indeed, he’s instrumental in framing Felix – but we should also remember that Rachel was blackmailing him into helping her. Whether that means his loyalty will stay with Rachel or not, I guess we’ll find out.

Dr. Leekie (Matt Frewer) also switches sides – or at least plays for the other side this episode – when he goes against Rachel’s orders to stop Cosima’s treatment. Leekie explains that Project Leda was put to rest after a fire in the labs destroyed the original genome.

It’s more than likely this desire to figure out what the genome was and how the clones exist that motivates Leekie to help Cosima, but as long as Cosima is getting help for her disease – if the treatment works, that is – I’m okay with whatever makes Leekie disregard Rachel.

One last change in loyalties comes from the Prolethean camp. When Helena was being held by Henrik (Peter Outerbridge) and his family, she met Henrik’s daughter, Gracie (Zoé de Grand’Maison). Gracie has had several scenes in the past few episodes where she expresses her dislike of Helena, but it was hard to see where her story was going.

Even in “Ispa Scientia Potestas Est,” Gracie’s story is still up in the air. She is understandably upset when her parents sew her mouth shut for refusing to talk about Helena’s escape – the makeup is great but this kind of torture makes the Proletheans a lot less interesting – but she apologizes for letting Helena escape.

The Proletheans are most intriguing when their plot focuses on Henrik’s shared interest in science and religion, but when their punishments are so corporeal, it’s hard to see any merit in them. I’m willing to see where this takes us just because of how horrifying it is that if Gracie can’t bring Helena back, she’ll have to carry the baby herself. But I don’t want the Proletheans to only be horrifying because that makes them too one-dimensional and not complex characters.

Back with Cal (Michiel Huisman) and Kira, not much happens, and luckily for Sarah, Cal doesn’t up and change sides. But there’s something more going on with Cal. He has a lot of money – in different currencies, no less – and fake IDs as well. I don’t think he has nefarious intent, given the fact that he could have taken off with Kira at any point in the past two episodes, but something is definitely happening there.

Even the little bit we get of Cal and Kira is more than we get of Alison, who is MIA this episode. While I’m kind of hoping that means we can skip over Alison’s stint in rehab entirely, I’m also interested in how rehab will change Alison. It looks like next week, we’ll get to find out which it is.

Also, next week, Helena and Sarah are going on a road trip! So, be sure to tune in for that. Because “Ipsa Scientia Potestas Est” is more about moving pieces into place than revealing any new information, it moves slower than the other episodes have this season, but if it leads to a Helena and Sarah road trip, so be it.